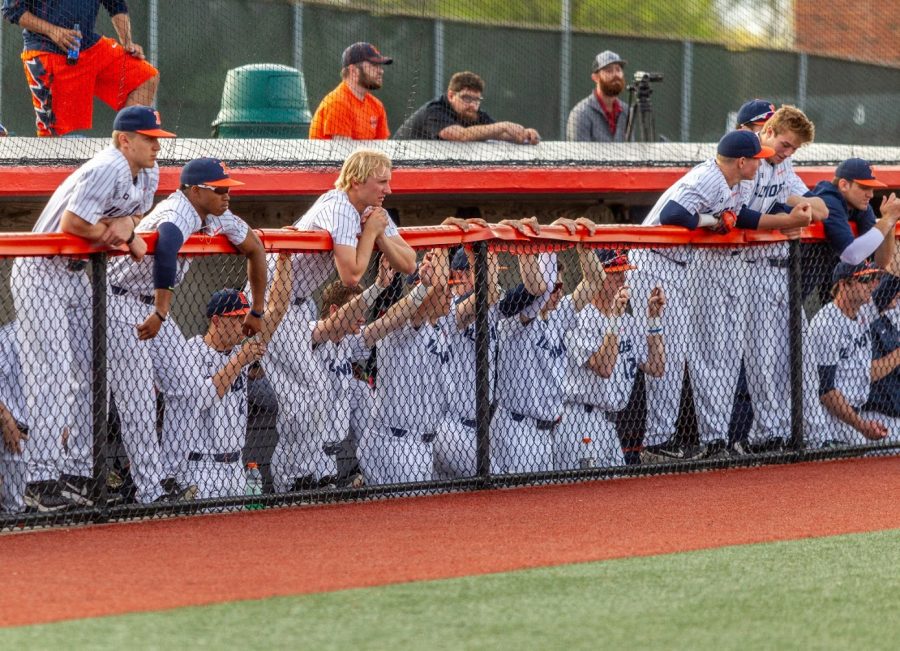 Illinois’ dugout on March 1 vs. Indiana State. The Illini won 5-2.

After a less-than-satisfactory 1-2 start to the season, the Illinois baseball team will look to pick up momentum and snap its two-game losing streak against Western Carolina in Conway, South Carolina, on Friday at 10 a.m. Over the three-game road series, Illinois will take on Coastal Carolina on Saturday at 2 p.m. and West Virginia on Sunday at 10:30 a.m.

A couple of loud home runs, courtesy of junior outfielders Nathan Aide and Taylor Jackson, were the offensive diamonds in the rough during the weekend.  Sophomore infielder Branden Comia, who started all three games at shortstop and reached safely in each contest while collecting three hits, was also another key contributor for Illinois. Despite individual standouts, the Illini bats were relatively cold as they earned just eight runs over the three-game opening series.

Head coach Dan Hartleb had an optimistic outlook for the remainder of the season.

“You’ll see great improvement from this weekend to next weekend from this team,” Hartleb said. “Moving forward, this is going to help us improve.”

The pitching staff recorded strong performances in North Carolina as Illini starters threw 15 and 1/3 innings while whiffing 18 and walking only a single batter.

The Illini are looking to transfer that success to silence the Western Carolina Wildcats, who jumped out to a 4-0 start when they swept all four against the Chicago State Cougars over the weekend. The Wildcats put up an impressive 34 runs at their home turf during the doubleheader on Saturday at Childress Field. The Illini have faced the Wildcats just four times and have a 2-1-1 record against them.

Around the Big Ten, Michigan State tops the leaderboard after also leaping to a 4-0 start and sweeping Morehead State, including two double-digit scoring games on Friday (15-3) and Sunday (10-4).  Maryland is also undefeated after its pitching staff surrendered just six runs over three games in South Carolina. Illinois currently sits in ninth place on the young season.