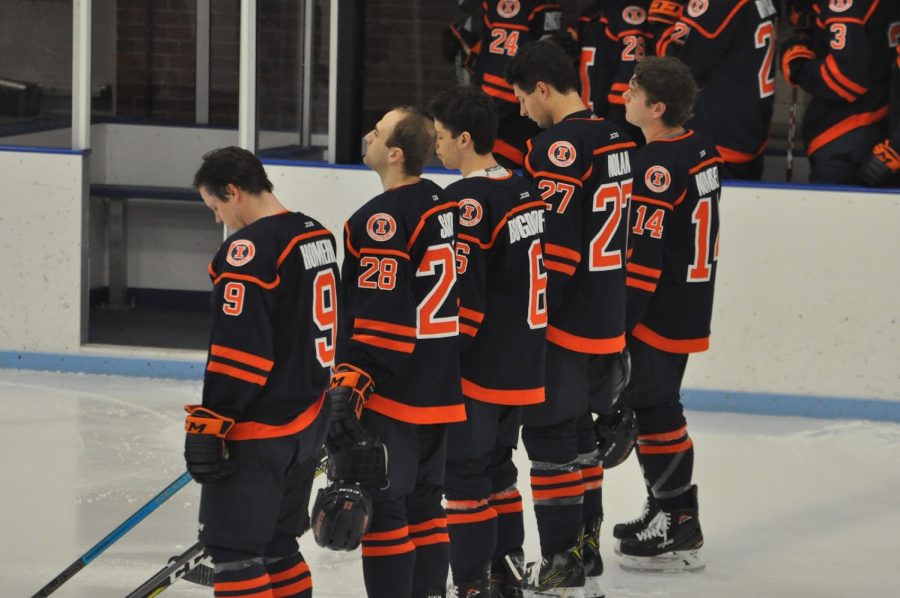 The Illini hockey team listens to the National Anthem before a game against Ohio University Dec. 6. The Illini anticipate an intense matchups against Davenport this weekend since the playoffs are right around the corner.

Hockey playoffs are right around the corner, which means contending teams, like Illinois, are trying to finish with wins and head into the playoffs on a hot streak. The Illini have high hopes heading into the playoffs because the opening rounds will be hosted at the University of Illinois Ice Arena.

“It was really nice to get a sweep this past weekend to get on the right track headed into the end of the season,” said senior forward Jon Moskaluk. “We want to be as hot as possible going into playoffs since we’re hosting at (the Illinois Ice Arena).”

However, if Illinois wants to have a successful weekend, the team will need to come ready to play, since their upcoming opponent, Davenport, is having a successful season so far with a 16-9 record and will look to continue winning matchups, especially against Illinois.

Davenport is coming off a weekend series against top-ranked Adrian College. Davenport lost in a hard-fought battle 5-3 Thursday night and 4-1 on Friday night. But despite losing both games, keeping the contests within reach is still a small victory.

Even though these teams haven’t yet played this season, the level of competition will be high. The Illini are hoping to feed off this weekend sweep and raise their winning streak to three. Davenport will be looking to get back in the win column after a tough series-splitting home game with Adrian.

“We know that Davenport is going to play tough,” Moskaluk said. “They’ve played us really really hard in the past.”

This weekend will bring solid play and high-intensity with the playoff push underway. It’s important for Illinois to win since there’s limited action left before the games carry even more significance in postseason play.

This series is the second to last for both squads. After the two away games in Davenport, Illinois will return back to the Illinois Ice Arena for its final season series against Robbert Morris University on Feb. 28 and 29.