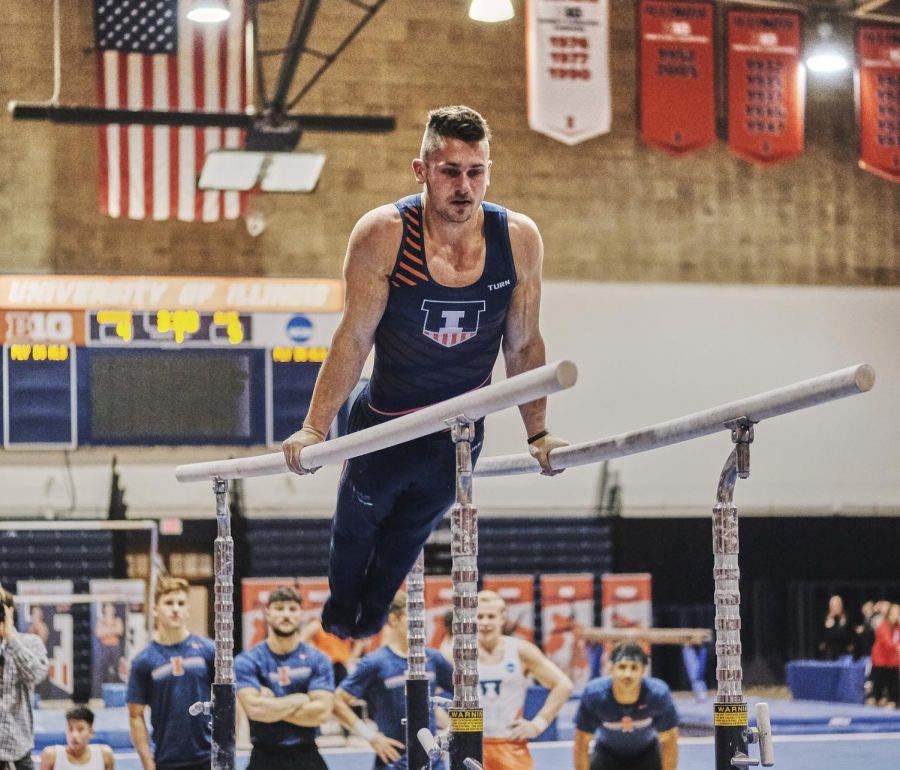 Junior Jordan Kovach performs on the parallel bars at the Illini Orange and Blue meet at Huff Hall on Nov. 8. Kovach and his teammate Alex Diab will participate as individuals in the U.S.A. Gymnastics Winter Cup Challenge in Las Vegas this weekend.

Illinois men’s gymnastics doesn’t compete as a team for another two weeks, but junior Jordan Kovach and graduate Alex Diab will compete as individuals in the U.S.A. Gymnastics Winter Cup Challenge in Las Vegas this weekend.

“Really, it’s just another competition. That’s how I’m looking at it going into it,” Kovach said. “It’s a lot different than an NCAA meet in the sense that I don’t have a team with me. It’s a lot more pressure on myself individually than it would be on the team at a meet.”

To prepare for this pressure, Kovach trained more intensely in practice over the last few weeks, which included doing extra sets and half routines to perfect some of his skills.

“We’ve been trying to put a little more pressure on me in the gym so the pressure at the meet isn’t as overbearing,” Kovach said. “I’ve been hitting it pretty heavy the past couple of weeks, and I’ve been going pretty good. I feel ready.”

In the weeks and competitions leading up to the Winter Cup Challenge, Illinois head coach Justin Spring watched Kovach and Diab compete – Kovach against Springfield College and Diab in a non-collegiate competition in Houston last weekend.

“They look strong; they look well-prepared,” Spring said. “They just got to go out and be their best when it matters.”

Spring believes the Winter Cup Challenge could be beneficial to Kovach and the team as a whole once Kovach rejoins the team against Iowa on March 1.

“It’s a big deal for Jordan to be able to compete on this national stage, and it’ll be some great experience. I think it will give him a little bit of an edge after competing for himself at this prestigious event,” Spring said. “I think he’ll have a little extra confidence and that’s good. You want to have that competing in a sport like ours.”

Spring, along with assistant coach Don Osborn, will accompany Kovach and Diab to Las Vegas this weekend, giving Kovach an added confidence boost.

“They’re veterans in gymnastics,” Kovach said. “Justin’s been to Winter Cup more times than you can count. Don’s coached guys in Winter Cup for as many years. They both really know what they’re doing, so it’s nice that they can come with us and walk us through it.”

While Spring, Osborn, Kovach and Diab are in Las Vegas, the rest of the team will remain in Champaign under the direction of associate head coach Daniel Ribiero. Spring has the team scheduled for what he calls an “NCAA simulation” or two consecutive days of all-around practice, which is extremely difficult to do in gymnastics.

“Our sport is the most physically demanding sport on planet Earth,” Spring said. “When you finish an all-around, you feel like your body just went through a gauntlet. It’s brutal.”

According to Spring, this the reason most gymnastics events in the world, including the Olympics, schedule their all-around competition days on nonconsecutive days. But the NCAA schedules its championship all-around preliminary and final rounds on back-to-back days to prevent student-athletes from missing too much school.

“There’s not many chances we get to run that simulation because it’s so taxing on our guys,” Spring said. “We’re taking advantage of this bye weekend to run this gauntlet.”