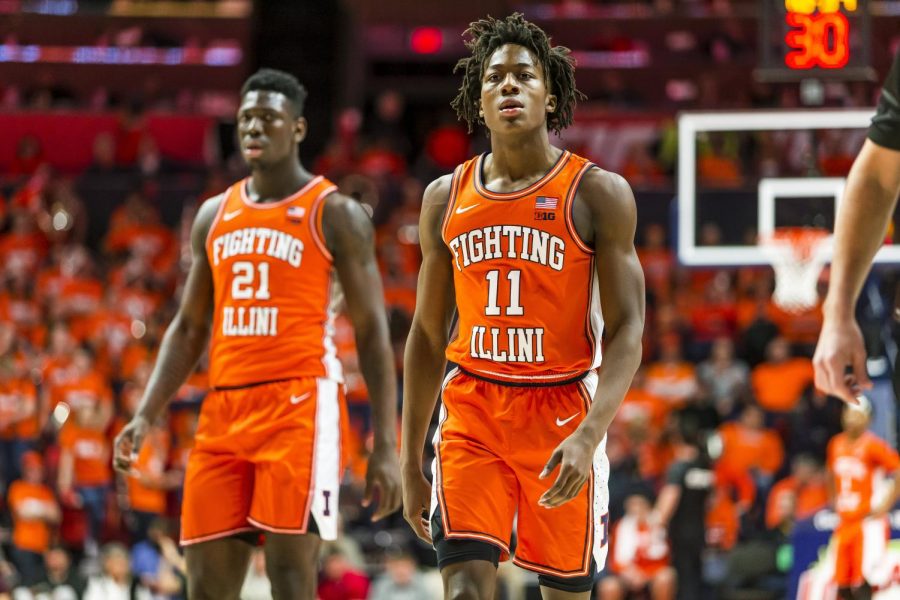 Sophomore Illini guard Ayo Dosunmu (11) and center Kofi Cockburn (21) walk out of a timeout after a strong start by Michigan State during the first half at State Farm Center in Champaign on Feb. 11. Illinois will host Nebraska Monday night at home. Tipoff is at 7 p.m.

After a stretch of playing five back-to-back games, Illinois basketball went on a six-day break before it hostw Nebraska at State Farm Center on Monday night. Illinois ended a four-game losing streak with a win at No. 9 Penn State last Tuesday as sophomore guard Ayo Dosunmu returned from a knee injury.

Illinois (9-6 in Big Ten) and Nebraska (2-13 in Big Ten) sit at opposite ends of the Big Ten rankings. The Illini are behind four teams tied for second place with 10-6 records in the Big Ten, while the Huskers rank 13th and are one game in front of the Northwestern Wildcats.

The Illini defense has been rock solid all season as they lead the Big Ten in scoring defense during conference play, allowing just 63.1 points per game. Nebraska, however, has three players that average double-digit scoring.

Senior guard Haanif Cheatham leads the Husker with 12.5 points per game and shoots 49.4% from the field. Cheatham has scored 14 points or more in five of his last six games. Sophomore guard Cam Mack averages 12 points per game but has scored just 14 total points in his last three outings.

Cockburn and Feliz follow Dosunmu, averaging 13.6 and 11.0 points, respectively. Feliz has scored in the double digits for six-straight games.

Cockburn leads the Illini in rebounding with 8.9 per game. He will have the size advantage over Nebraska as its starting forward, freshman Yvan Ouedraogo, stands at 6-foot-9. Ouedraogo averages just 5.6 points per game and 6 rebounds per game.

The Huskers’ last win was on Jan. 7 against Iowa and have not won a road game this season. The Illini are 12-3 at home this season but have dropped their last two games at State Farm Center.