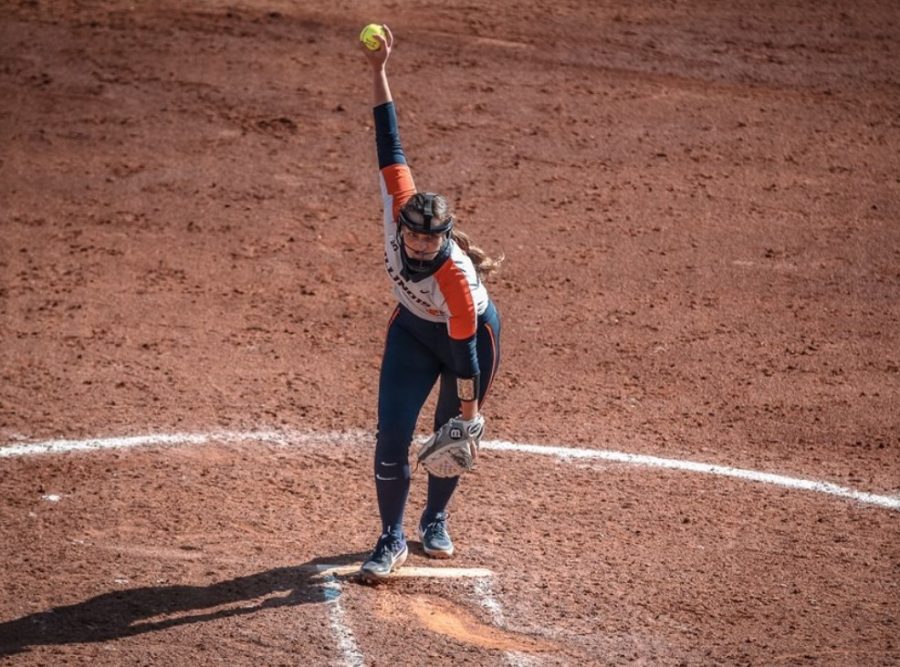 Addy Jarvis winds up for a pitch during Illinois’ match against Texas State at Waco, Texas, on Friday. Pitching was at the forefront of the Illini’s 2-2 record at the Baylor Invitational.

Runs win games, but for head softball coach Tyra Perry, you only need to earn one if sophomore Sydney Sickels is pitching. Behind phenomenal pitching — zero earned runs allowed — Illinois jumped out to a 2-2 record in the Baylor Invitational, despite a continued struggle from the batter’s box.

In their first game of Friday’s doubleheader, the Illini sent out sophomore Addy Jarvis to shut down the slugging Texas State Bobcats, who were coming in hot after knocking off No. 17 Minnesota earlier in the day.

After failing to capitalize on an Avrey Steiner leadoff single in the first, Jarvis pitched a 1-2-3 inning before junior catcher Bella Loya connected with ball for her first home run of the year, giving the Illini a 1-0 lead.

In the next half-inning, the Bobcats started to show signs of life with a leadoff infield single and a full count walk. Feeling aggressive with only one out, the Bobcats managed to successfully double steal, setting up the runners at second and third. Knowing that even a single would give Texas State the lead, Jarvis settled down and shut down the next two hitters with back-to-back strikeouts to get out of the jam.

The Illini hit a few one-out doubles but came up empty-handed. However, it didn’t matter since Jarvis and the defense took over.

Looking to finish off the complete game, Jarvis walked ArieAnn Bell, prompting Perry to pull the starter in favor of ace Sickels. Sickels didn’t mess around at all as she faced two batters and coined two outs to secure an opening 1-0 victory.

Perry was thrilled by the production from her starter.

“I was proud of our solid defensive play behind Addy Jarvis in the day’s first game,” Perry said, per Illinois Athletics. “She was masterful in the circle.”

After a little celebrating, the Illini had to move on quickly to face the host of the tournament, the Baylor Bears.

Similar to the opener, each of the starting pitchers looked flawless, each throwing three hitless innings to start things off.

The Illini’s failure to score changed a bit in the sixth inning with Co-Big Ten Freshman of the Week Delaney, driving in junior Rhein Trochim with a sacrifice to give the Illini a 1-0 lead.

With the way Sickels was pitching, it looked like securing six outs and the victory would be inevitable. However, the Illini defense changed those plans a bit.

Back-to-back infield errors led Baylor to cash in on its leadoff double, which tied it up at 1-1. After settling down a bit and getting an out, the game was broken open on a three-run home run by sophomore power hitter Josie Bower. The Bears would tack on another run to push their lead to 5-1. Although all five of the runs were unearned and didn’t count on Sickels ERA, she would still be credited with the loss.

The Bears took care of business in the final inning, retiring the final three batters after a leadoff walk and walked away with a 5-1 victory.

“We worked hard to take the lead in our second game against Baylor but had a few miscues on defense that hurt us in the end,” Perry said. “We are a young team that is learning and growing with each pitch. Now it is time to refocus and come out strong against Tulsa tomorrow.”

Against Tulsa, Perry decided to give Sickels the start again, despite pitching the previous. It seemed to be a smart decision as Sickels was even more dominant than before.

Almost identical to the first few games, the teams got no offensive production. Tulsa, who started the invitational down two, hadn’t even scored their first run yet as they were shut out by Minnesota and Baylor.

Offensive action picked up in the fourth inning for the Illini with Steiner getting on base again with a leadoff single. Her work, though, was quickly undone with a double play, but that didn’t stop the Illini from trying to break the tie. Rummell, who went hitless during the first three games, was disciplined at the plate and got on with a leadoff walk to kick start the offense. Loya then swung at the first pitch and hit a gabber, sending Rummell to home plate in the process. Loya would be thrown out at third, but it didn’t matter as the Illini had taken a 1-0 lead.

With Sickells given a similar task as the day before — secure the victory — she took complete control, only allowing one hit in the final four innings in the process of throwing a complete game shutout, winning 1-0.

Illinois took on their hosts once again on Sunday, dropping a close one to Baylor, 5-4. Sophomore outfielder Danielle Davis led the Illini at the plate, picking up four RBIs against the Bears.

Despite top-notch pitching again, the lack of production from the batter’s box hurt Illinois. After the first four games this weekend, the Illini move to 7-5 on the year with the Judi Garman Classic in Fullerton, California, up next.