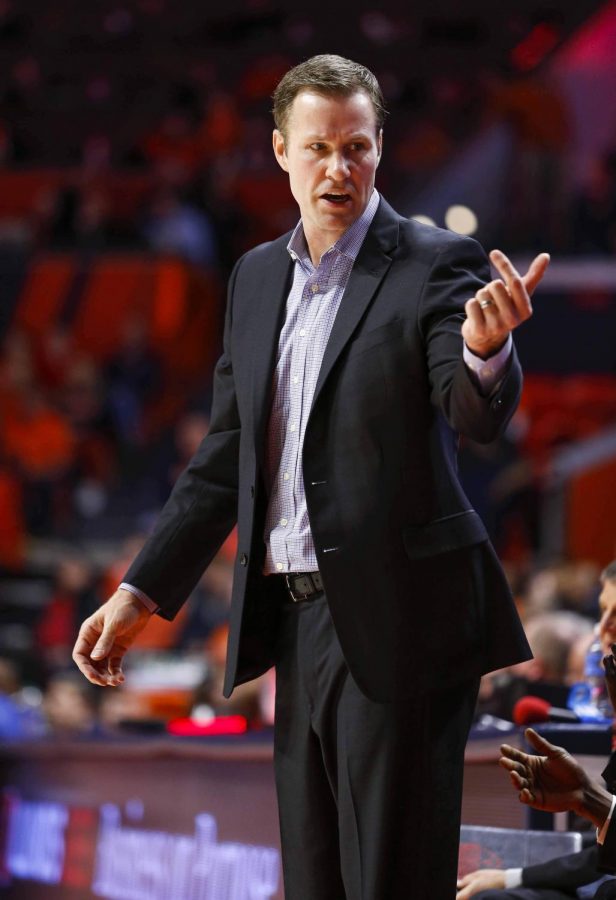 Nebraska head coach Fred Hoiberg directs action on the court from the sidelines during the Illini’s game against the Corn Huskers at State Farm Center Monday night. Hoiberg is in his first season at the helm of Nebraska’s men’s basketball program, following tenures at Iowa State and with the Chicago Bulls.

If you asked Nebraska head coach Fred Hoiberg at the start of the 2018-19 NBA season where he saw himself coaching in 16 months, he probably would’ve said at the United Center in Chicago, continuing the rebuild with the Chicago Bulls.

Hoiberg was coaching in Illinois Monday night, however, he was not roaming the sidelines of the Madhouse on Madison. Instead, he was taking charge of the Nebraska Cornhuskers, hoping to steal an upset victory from Illinois at the State Farm Center in Champaign.

After accumulating a 115-155 record in a little over three seasons with the Bulls, Hoiberg was fired on Dec. 3, 2018. Over the course of his tenure in the Windy City, Hoiberg oversaw two very different rosters. He started with a squad full of veterans with expectations such as Derrick Rose, Dwyane Wade, Pau Gasol and Jimmy Butler in his first two seasons before the team decided to tank and rebuild its roster around young talent like Zach LaVine, Lauri Markkanen and Wendell Carter, Jr. in his final two seasons.

Although fans didn’t seem surprised when his termination was announced, it can’t feel good for Hoiberg to watch the franchise stagnate in his absence, with many placing a significant portion of the blame on his successor, Jim Boylen, for the Bulls’ struggles.

In need of a new job, the former Iowa State head coach decided to make a return to the college game during the offseason and accepted the job at Nebraska.

The Cornhuskers were recently seen nationally as a program on the rise with an up and coming young coach in Tim Miles. But Miles couldn’t build on his breakout 2013-14 job, in which he guided the program to its first NCAA tournament appearance in 16 years, and Nebraska has yet to make the Big Dance since.

Hoiberg knew the job wouldn’t be easy, and the tough field in the Big Ten this season has done him no favors. The Cornhuskers sit second from the bottom in the conference after the entire 2018-19 roster, outside of juniors Thorir Thorbjarnarson and Dachon Burke Jr., was turned over.

During the pregame introductions, Hoiberg was greeted with boisterous boos from the Orange Krush student section. And the jeering didn’t stop there, as the students continued to jokingly jab at the Nebraska coach, many making references to his time with the Bulls throughout the game.

On the night, Hoiberg’s team didn’t have enough bodies to compete with the Illini. Before the game even tipped off, it was announced standout sophomore Cam Mack would miss the game due to illness. Already dealing with an inexperienced, thin roster, replacing Mack’s 12 points, 6.5 assists and 4.7 rebounds per game wasn’t going to be an easy task for the former Bulls coach.

“Considering what we found out before the game with Cam, I thought our guys when out and battled extremely hard all the way to the end. I’m proud of them for that,” Hoiberg said. “They are continuing through a tough stretch (and) come in every day and work on getting better and continuing to come out and play with great intensity and great effort.”

A perfect image to personify Hoiberg’s first season in charge of the Cornhuskers occurred at the end of the first half, as his team clawed its way out of an early deficit and looked to be headed to the halftime break in an optimistic mood trailing by just one possession. However, Illini junior Trent Frazier proceeded to drain a shot at the buzzer from the Cornhuskers free throw line to gut-wrenchingly extend the Illinois lead to 37-31 and energize the crowd at the halfway point.

To turn things around in Lincoln, Nebraska, Hoiberg will likely utilize the same roster development strategy he did during his tenure at Iowa State, where he signed under-the-radar recruits and numerous transfers to build a Big 12 championship contender. While in Ames, Iowa, Hoiberg’s most famed recruiting pickups were low-four star prospects Georges Niang and Monte Morris, while his best transfer additions included Royce White, Will Clyburn, Deandre Kane, Abdel Nader and Deonte Burton, all of whom went on to play professional basketball at some level, mostly in the NBA.

Thus far, Nebraska has already landed a commitment from junior college wing Teddy Allen, formerly a highly-regarded player at West Virginia and then Wichita State. Look for Hoiberg’s staff to be active in the transfer market this offseason with both grad transfers and players required to sit out one season. Nebraska’s rebuild may even be aided by a new proposed rule the Big Ten and ACC have already announced support for in which NCAA athletes in football, men’s and women’s basketball, baseball and hockey would be granted the right to transfer once without having to sit out a season no questions asked.

Despite the fact his team sits at 7-20 overall, including losses at home to Southern Utah, UC Riverside and North Dakota, there’s anticipation of a quick turnaround from Hoiberg in Lincoln, especially once transfer season heats up after the NCAA Tournament.