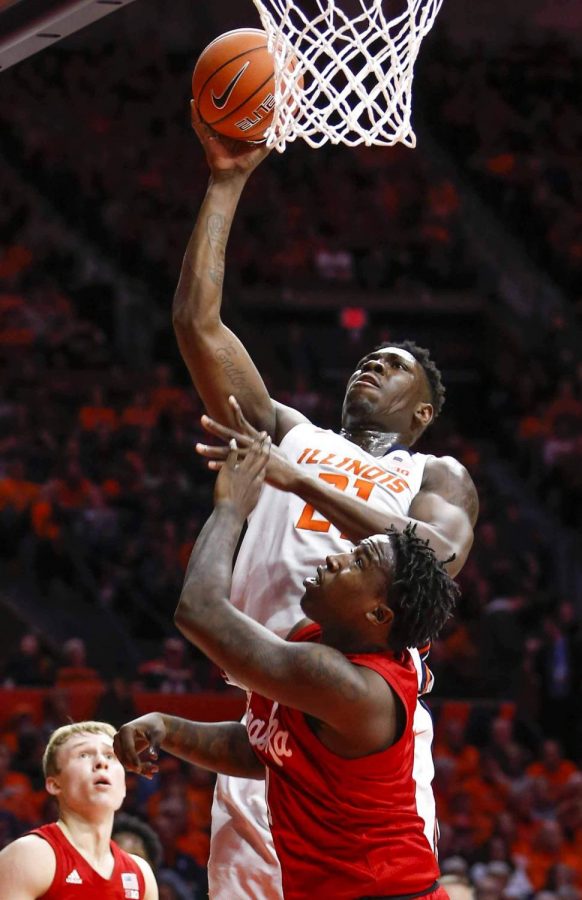 Freshman Kofi Cockburn drives up to the basket against a Nebraska defender on Monday.

After taking care of Nebraska on Monday night, Illinois (18-9, 10-6) faces the other basement dweller in the Big Ten standings, Northwestern (6-20, 1-15), Thursday on the road. Illinois is looking to pile on wins with seeding for the Big Ten Tournament still up in the air. Although the Illini are winning games, sophomore forward Giorgi Bezhanishvili is in the midst of a slump, one that’s seen him relegated to a bench role. Though the Wildcats are certainly having a down season, they’ve competed hard and had a chance to steal wins on more than one occasion, including the last time the two teams met.

And Second Place Goes To…

As of Tuesday night, five programs sit tied for second place in the Big Ten at 10-6, including Illinois. Beyond that, Rutgers and Michigan each sit just a game back in the win column, with the latter arguably playing the best basketball in the conference at the moment. Although first-place and No. 9 ranked Maryland may have done just enough to put itself out of reach, the placing of the teams behind it is still up in the air.

“It’s the Big Ten; everybody’s good,” said Illinois head coach Brad Underwood. “I’m not shocked by anything. This league has got great coaches. We all beat up on each other. There’s no easy nights.”

While the squads sit jumbled up with two weeks of regular season basketball left to play, things should clear up as all the teams fighting for second will square off with at least one other opponent, vying for the runner-up spot in the remaining games.

For Illinois, that means a matchup on Senior Night in the regular-season finale against Iowa. Interestingly enough, though Ohio State is one of the six Big Ten schools currently ranked, the Buckeyes actually sit two games back of the second-place contenders at 8-8, matching up with the Illini on March 5.

This college basketball season has easily been the most unpredictable year in a very long time. In just the past week, then No. 1 Baylor lost at home to Kansas, Duke was blown out at unranked North Carolina State and undefeated San Diego State lost its perfect season at home to a .500 University of Nevada Las Vegas team. The Big Ten has been no different, and it would be nearly impossible to accurately predict how the final standings will shake out. The players who step up will determine who comes out on top.

After coming out of nowhere to set records as a freshman, sophomore forward Giorgi Bezhanishvili has taken a step back in his second season at Illinois.

After averaging 12.5 points and 5.2 rebounds in his inaugural season, including breaking the Illinois record for points in a single game by a freshman, Bezhanishivili was averaging just eight points and five rebounds per game heading into the Feb. 11 game at home against Michigan State.

Bezhanishvili ended up shooting 1-7, including 0-3 from deep, with just two points in that game, causing Underwood to move him to the bench in the following game at Rutgers in favor of using Andres Feliz and going small with four guards.

The sophomore has now come off the bench in Illinois’ three games since the Michigan State loss and has continued to struggle offensively, scoring just eight total points during the stretch, including a goose egg against Nebraska on Monday.

Although he grabbed four offensive rebounds and had ample looks from close range against the Huskers, Bezhanishvili couldn’t get the right touch on the ball, shooting 0-6.

“I can’t explain it; we saw him (Bezhanishvili) set a freshman school record in here and didn’t miss anything,” Underwood said. “Sometimes, the game’s evasive — it gets really hard — and I don’t know why. All I know is to keep fighting, keep grinding, and it will come back to you. You can’t wallow in that moment that it didn’t work out. It’s on to the next, and you gotta show that grit, that fight. I think, we would all be very comfortable knowing every one of those shots he took tonight, I would feel great about him shooting every single time.”

Once freshman center Kofi Cockburn signed with the program last spring, it was plausible to predict a possible playing time conflict would arise between him and Bezhanishvili, as modern-day basketball isn’t geared toward lineups with two traditional big men. The hope was the two would find a way to function together, and while it worked for the first three months of the season, it’s clear the approach, especially on Bezhanishvili’s end, needs to change for the Illini to be successful in March.

There isn’t a lot of positives to take away from this season for Northwestern head coach Chris Collins’ team, as the Wildcats sit at 6-20, including home losses to Merrimack College (playing in its inaugural season at the Division I level), Radford and Hartford.

Although they didn’t come out on top at the end in any of the matchups, Northwestern pushed Maryland twice, Rutgers on the road and even Illinois in Champaign, Illinois, on Jan. 18.

On the day, the Wildcats had four players score in double figures but just couldn’t stop a balanced Illini attack, as Illinois pulled it out, 75-71.

“As I watched them, it felt a little bit like our team last year,” Underwood said following the Jan. 18 game. “Just youth and maybe not quite able to play 40 minutes, (but) they were really good tonight.”

The Wildcats are led by sophomore wing Miller Kopp, who averages 13 points per game to top the team.

Simply put, a loss to the Wildcats would be devastating enough to likely drop the Illini a full seed line in the bracket and possibly leave them on the other side of the bubble if they find themselves there on selection Sunday, so the goal heading into Thursday needs to be to come out on top by any means necessary.