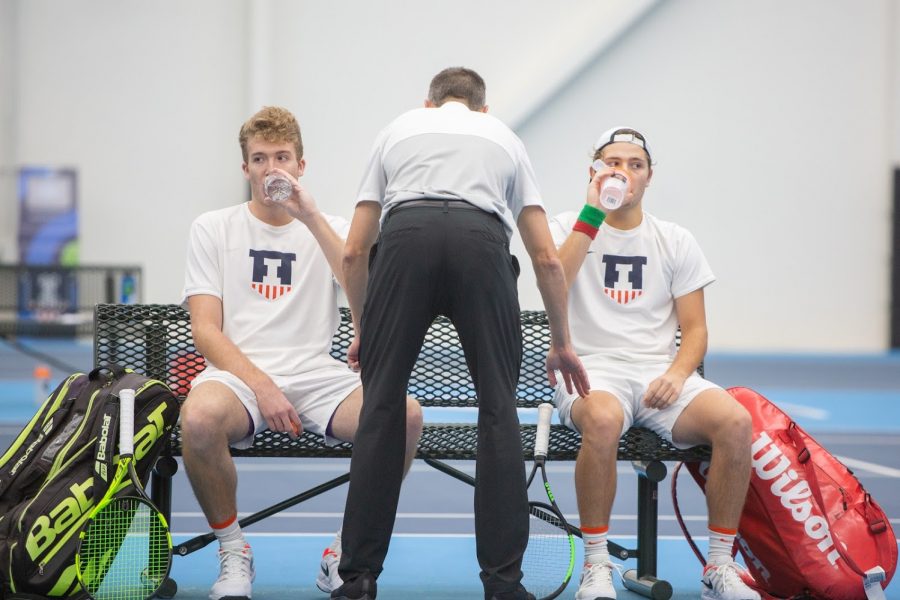 Junior Alex Brown and senior Aleks Kovacevic rest between sets as head coach Brad Dancer encourages them during a doubles match against Baylor Feb. 29. After their season was abruptly cancelled, the players are focusing on directing their disappointment to empower their futures.

The Illinois men’s tennis team dropped another heartbreaker on Saturday night as it fell to the No. 21 Baylor Bears in the Big 12 Conference, 4-3.

The Illini picked up a tight doubles point as sophomore Siphosthando Montsi and redshirt junior Gui Gomes defeated Baylor sophomore Adrian Boitan and redshirt senior Ryan Dickerson in a 7-6 (8-6) victory. The Illini continued their success by racing out to a 2-0 lead with a near-sweep of Baylor freshman Alex Garcia by Montsi, 6-0, 6-1.

However, the challenges of the match followed Illinois’ success, with the Bears picking up four straight wins over the Illini, clinching the match. Illinois senior Aleks Kovacevic completed his match, defeating Baylor junior Sven Lah in a close 7-6 (8-6), 6-7 (4-7), 10-3 victory.

“(Horve) has got to come out with maybe a bit more of a chip on his shoulder in terms of who he thinks he is,” Dancer said. “I don’t know if he’s playing with a lot of confidence right now.”

Dancer took part of the blame for the tight loss of senior Zeke Clark.

“(Clark) missed some opportunities to capitalize in the first set,” Dancer said. “I gotta do a better job of coaching (Clark) and him and I getting on the same page … It’s a critical spot for us for Zeke to play at his best.”

Kovacevic said he was hoping for a team win, despite his singles win.

“I’m definitely sad we lost. This is a ranked team, if we won, it would’ve been big for us,” Kovacevic said.

Kovacevic said his win gave him confidence, but it didn’t matter in the end as the team eventually dropped the match.

Clark praised the effort of his teammates during the doubles matches.

“We did a really good job in doubles, staying on top of a really good team,” Clark said. “To grind that out and find a way through the doubles point was really positive.”

Clark took note of how the match was decided by only a few points but accepting it as the nature of the game.

“In a good college tennis match like tonight, it’s gonna come down to a couple of points,” Clark said. “It didn’t go our way, and that’s that. So we gotta get back to work.”

The Illini begin conference play this week against the Northwestern Wildcats in Evanston, Illinois, on Saturday and host the Purdue Boilermakers on Sunday.