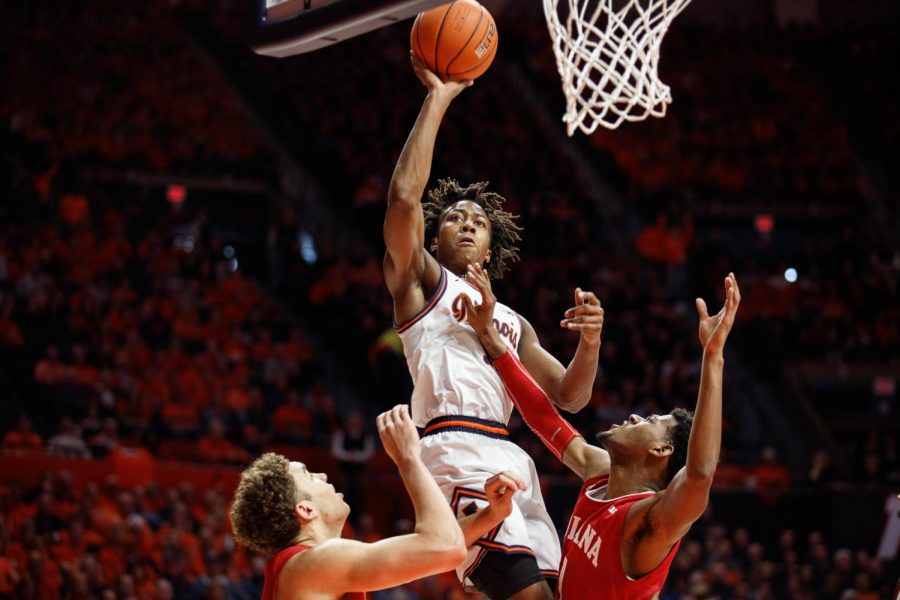 Sophomore guard Ayo Dosunmu rises through two Indiana players for a dunk during the Illini’s game against the Hoosiers at State Farm Center Sunday afternoon. Illinois outplayed Indiana, 67-66 and bounces back into the Associated Press top-25 poll for the first time in three weeks.

After winning four-straight games, Illinois basketball is back in the Associated Press top-25 rankings.

The team jumps back in at No. 23 in the latest poll after wins over Nebraska, Northwestern, and Indiana last week. The ranking comes after the Illini spent the two weeks prior unranked, after reaching as high as No. 19 in early February.

Illinois joins eight other Big Ten teams in the ranking this week. No. 9 Maryland, No. 16 Michigan State, No. 18 Iowa, No. 19 Ohio State, No. 20 Penn State, No. 24 Wisconsin, and No. 25 Michigan. The Big Ten is the most represented conference in the latest standings.

The Illini have two games left in the regular season including one against a ranked team. On Thursday, the team will head to Columbus, Ohio to face Ohio State (20-9, 10-8) and on Sunday, State Farm Center will see it’s last game of the season when No. 18 Iowa (20-9, 11-7) travels to Champaign for a rematch.

Both games provide an opportunity for the Illini to not only increase their AP ranking and NCAA Tournament seeding but could also allow the squad to move up in the Big Ten conference standings. Illinois currently sits in a three-way tie for second place along with Michigan State and Wisconsin, trailing first-place Maryland by only one game.