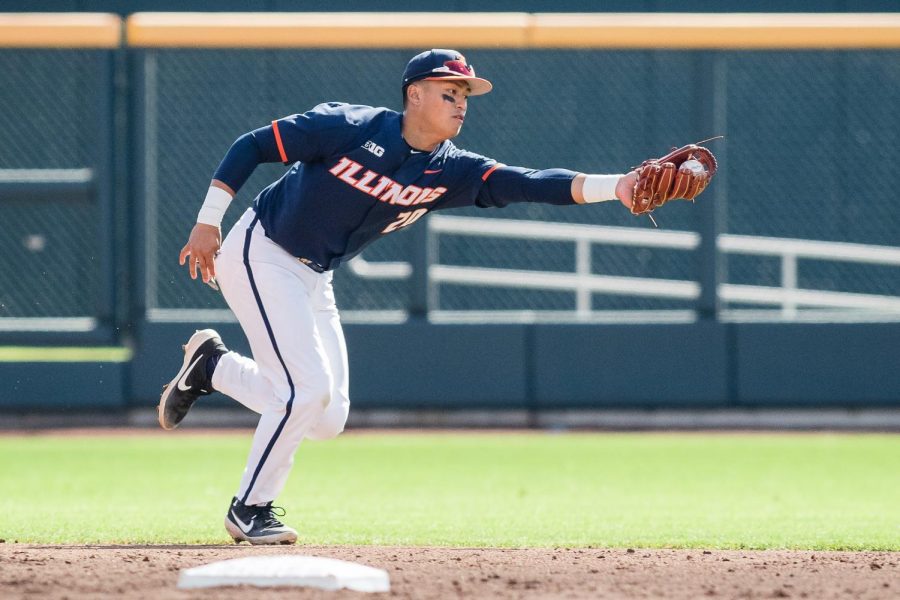 Illinois shortstop Branden Comia (20) snags a ground ball during the game against Maryland in the Big Ten Tournament at TD Ameritrade Park on, May 22, 2019. The Illini lost 6-2.

It’s been 296 days since the Illini baseball team set foot on Illinois Field.

But, that number rolls back to zero Tuesday when Illinois (5-4) hosts Chicago State (2-10) in its earliest home, season opener in program history.

The Illini are set to make their debut in Champaign following three weeks on the road, which was highlighted by the squad’s second-place finish at the Frisco Classic in Frisco, Texas, last weekend. Chicago State travels to Illinois Field after dropping its last four-straight contests.

The Illini are 11-1 against the Chicago State Cougars and have clinched the last 10 games dating back to 1985, according to Illinois Athletics. Junior southpaw Jimmy Burnett (0-2, .675) is projected to start Tuesday’s contest on the mound for Illinois, while freshman right-hander Blake Kaplan (0-0, 0.0) is probable to begin the game for Chicago State.

Illinois’ offense enters the mid-week game after a fruitful weekend in Texas. Sophomore shortstop Branden Comia headlined last weekend’s road swing, extending his hitting streak to six-straight games and tallied a game-winning hit against No. 13 Texas A&M along with a triple and home run versus No. 23 Oklahoma State.

The Illini have a reliable closer in their arsenal as well with senior righty Garrett Acton, who’s clinched four saves in 3.2 innings pitched so far this season.