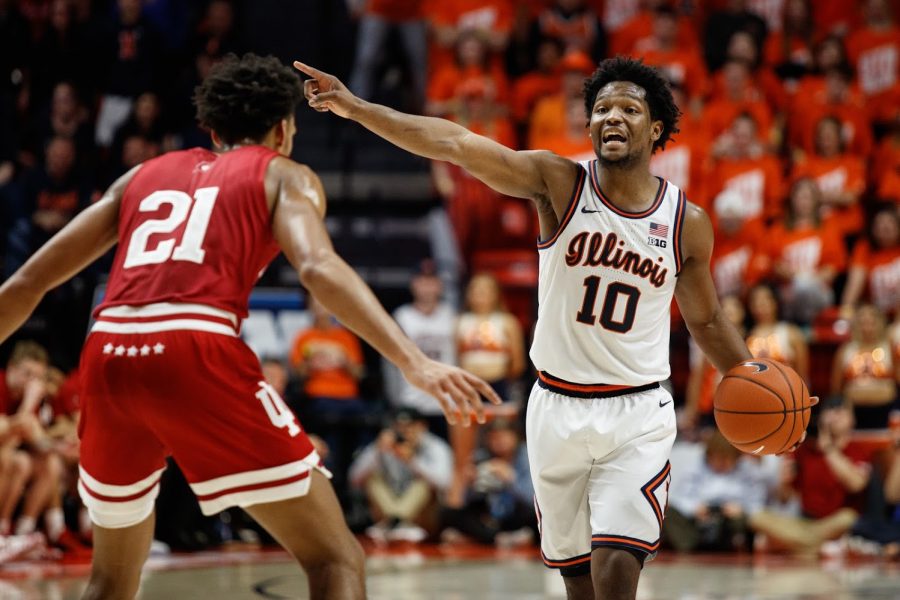 Senior guard Andres Feliz calls a play during the Illinois’ game against Indiana at State Farm Center on Sunday.

Heading into Thursday’s road finale at No. 19 Ohio State, Illinois is still in the mix for first place in the Big Ten with two regular-season games remaining, but a road win against a ranked opponent isn’t something the Illini have found easy to come by this season.

As of late, sophomore wing Alan Griffin has provided a spark off the bench for Illinois, making more than a few jaw-dropping highlight plays along the way. While Griffin serves as the energizing sixth man for the Illini, the Buckeyes tab freshman E.J. Liddell to play a similar role, a player many once thought would be suiting up in orange and blue this year.

This season, Illinois has played five games away from home against ranked opponents, but the team hasn’t fared too well, dropping four of them.

In the third game of the season on Nov. 10, an inexperienced team still building chemistry went out to Tucson, Arizona and got its doors rung by Arizona. The Wildcats turned things up in the second half and cruised to a 90-69 victory.

In Illinois’ next road test, the Illini fared much better, controlling the game at Maryland throughout, despite having only two players reach double figures in scoring, before a late Terrapin run and a series of self-inflicted Illini miscues allowed the home team to steal a 59-58 nail biter.

On Jan. 2, Illinois might as well have not made the trip, as they were blitzed at Michigan State, 76-56, losing wire-to-wire in a performance that was so bad, head coach Brad Underwood admitted he and the coaching staff threw out the game tape.

In Iowa City on Feb. 2, the Illini and Hawkeyes played a highly entertaining back-and-forth affair, but National Player of the Year candidate Luka Garza was simply unstoppable with a 25 point-10 assist double-double for Iowa, leading the Hawkeyes to a 72-65 win.

However, the last time Illinois went away from home to play a ranked opponent, the Illini turned things around and came out on top, as sophomore guard Ayo Dosunmu returned from an injury scare to score 24 points and inspire a 62-56 victory at then-No. 9 Penn State.

Regardless of record, most teams have a clear idea of who they are and what they need to do to be successful come March – no win comes easy this time of year, especially away from home. But Underwood feels his team has put the work in, starting last offseason, to come out successfully.

“It’s March, a lot of times in March you get beat, you go home and this is why you lift, this is why you run, you sweat in July, this is why you keep lifting and you keep doing the things we’re doing now,” Underwood said. “You push through the dog days so that you can get to this point, and I feel like we’re in a really good place, and I love the human beings in that locker room because of (their) character. Not only are we playing hard and it’s intense, but we’re also having fun, and that’s a big part of this time of year.”

During Illinois’ 79-62 win at Purdue on Jan. 21, Griffin was ejected for a stomp on the chest of Purdue’s Sasha Stefanovic, an incident that had many around the country up and arms and calling for severe punishment for the Illini sophomore. After serving a two-game suspension and issuing an apology, Griffin has returned with great effect, scoring double figures three times and hitting nine points another three times since he’s come back, as he’s averaged 11.1 points per game on 46% from behind the arc during that stretch.

The sophomore’s highlight performance was easily a career-high 24 point effort at Northwestern on Feb. 27, where he shot 6-8 from distance. During his hot streak, Griffin has also made more than a few highlight plays, including a crowd-energizing tip dunk against Nebraska on Feb. 24 and a monster alley-oop on his career day in Evanston.

“It’s something I work on, finding a different mindset for each game,” Griffin said following his big day at Northwestern. “If I didn’t play good in a recent game, I change my mindset. Today I had a different approach, and I’ve gotta keep with this approach from now on.”

A high-four star recruit hailing from Belleville, Illinois and claiming the title of Illinois Mr. Basketball in both 2018 and 2019, even taking the award over Ayo Dosunmu the first time around, many touted E.J. Liddell as Brad Underwood’s next home state savior to join Dosunmu and turn things around in Champaign.

Though he had Illinois on his list of finalists, Liddell instead decided to sign with Chris Holtmann and Ohio State, spurning the chance to slide into the Illinois frontcourt and compete for minutes with junior Da’Monte Williams and sophomore Giorgi Bezhanishvili.

Liddell profiles as a type of player that has become more and more popular in college basketball recently, a player with strength, athleticism and skill who suffers in terms of draft projections from not being as tall as typical stretch-forwards.

Despite not being touted as potential NBA prospects as an underclassman, these types of players still have futures in the NBA, especially once they produce big numbers as college veterans. Prime examples include Grant Williams, who led Tennessee to last year’s sweet sixteen before being drafted with 22nd pick in the 2019 NBA draft, and Dayton’s Obi Toppin, who is expected to go in the top-5 of this year’s draft.

Although Liddell averages just 6.2 points, his strength and savviness in the paint are frequently on display when he gets in the game. Look for the winner of Liddell-Griffin’s sixth man matchup to have a major impact on which team comes out victorious Thursday night.

With 20 wins, many experts feel the Illini are a safe bet to play in the Big Dance at this point, but a road win over a ranked opponent could help both in terms of seeding, and in case of an unforeseen upset come Big Ten Tournament time.