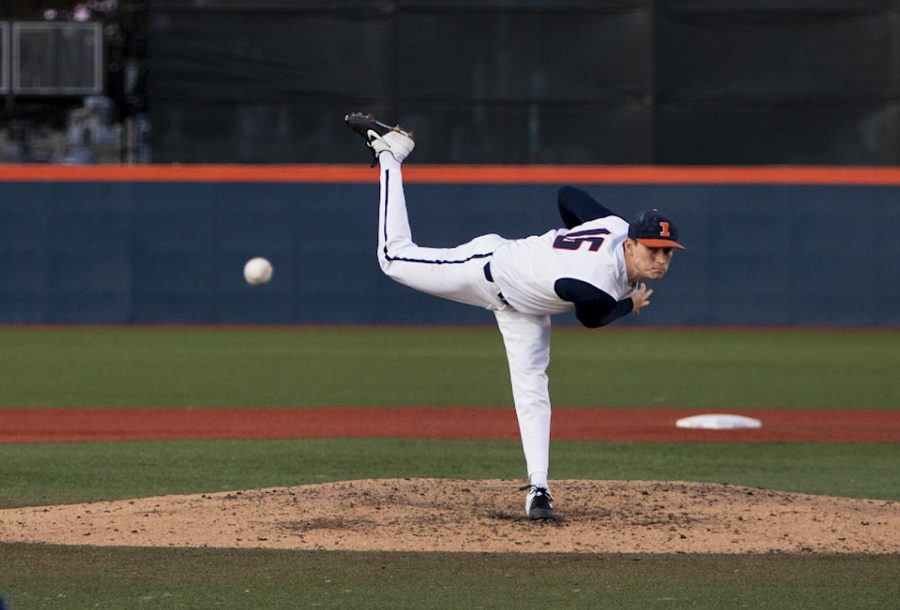 Illinois hosted the Chicago State Cougars in the program’s earliest home opener in history under the lights at Illinois Field Tuesday evening.

Illinois battled the Cougars for an 11-8 win in front of a crowd of 906 while conditions were windy and cool. With the victory, the Illini improve to 6-4 and have five of their last six games under the win column. Head coach Dan Hartleb hopes to keep his team humble before they hit the road and head to North Carolina for three games against Elon University.

“We weren’t as sharp as I would have liked us to have been,” Hartleb said. “We keep finding ways to win, but we’re not anywhere close to what we’re capable of.”

Despite shortcomings from the offense as a whole, the most reliable man at the plate continued to be sophomore shortstop Branden Comia, who reached five times and collected a single, a pair of doubles and a triple to drive in four of Illinois’s runs and come within a home run of the cycle. Comia’s career-high four hits and four RBIs paced the offense for the evening and kept the Illini from falling behind the Cougar’s constant offense.

“Comia has done a great job and had another great night for us,” Hartleb said. “It was a situation where we needed him to be productive. I was pleased with the fact we didn’t try to lift a lot of balls. It would’ve been easy to try to hit home runs, and I didn’t think we tried to do that.  I’m not saying we took great swings, but I thought we had a decent approach.”

Comia, who now has 15 hits on the season, got Illinois on the board in the first with an RBI double and cited a straightforward approach at the plate after a successful day.

The offense was aided by Cougar starter Blake Kaplan, who lasted just an inning, walked six men, hit two and surrendered two runs before he was yanked in the second without recording an out. Cougar pitching hit five Illini batters total, with a sixth pitch almost hitting junior Taylor Jackson had the umpires not ruled it a foul ball after review.

“It’s not a fun part of the game but it was important because we scored a number of runs off guys who got hit so it’s just like a walk, you find ways on base,” Hartleb said.

Illinois junior starter Jimmy Burnette, lasted just 2.2 and surrendered five earned runs before Hartleb brought in sophomore Caleb Larson for his first appearance of the season.  Larson got out of a jam with runners on in the third and tossed three more solid innings of two-run ball to eventually pick up the win.

“Coach talks about fighting, and being the first outing I had this year, it was nice to just get that first out, it was like OK it’s over,” Larson said of his debut.  “It was nice that coach had enough confidence in me to put me in that situation, and I’m thankful I’ve been given the opportunity to play here.”

Larson was holding onto a 9-7 lead when freshman Grant Leader and redshirt sophomore Ryan Kutt threw the next two innings and gave up one more. The Illini rallied in the eighth to tack on a pair of insurance runs before senior closer Garrett Acton got the call in the ninth. Acton struck out two and locked down his fifth save of the season after a stellar sliding catch by Jackson in center sent the Cougars packing. Acton is now tied with Tyler Jay for the most saves in Illinois history with 24.

Acton and Illinois will arrive in Elon, North Carolina, on Friday when they start a three-game series against Elon University Phoenix at 3 p.m. The Phoenix hold a 6-5 record and are looking to snap a four-game losing streak after getting swept by Indiana State over the weekend. Senior Ty Weber will likely take the ball for Illinois in the opener on Friday and look to again dominate in his fourth start. Weber currently sports an outstanding 0.51 ERA over 17.2 innings with two wins and 12 strikeouts.