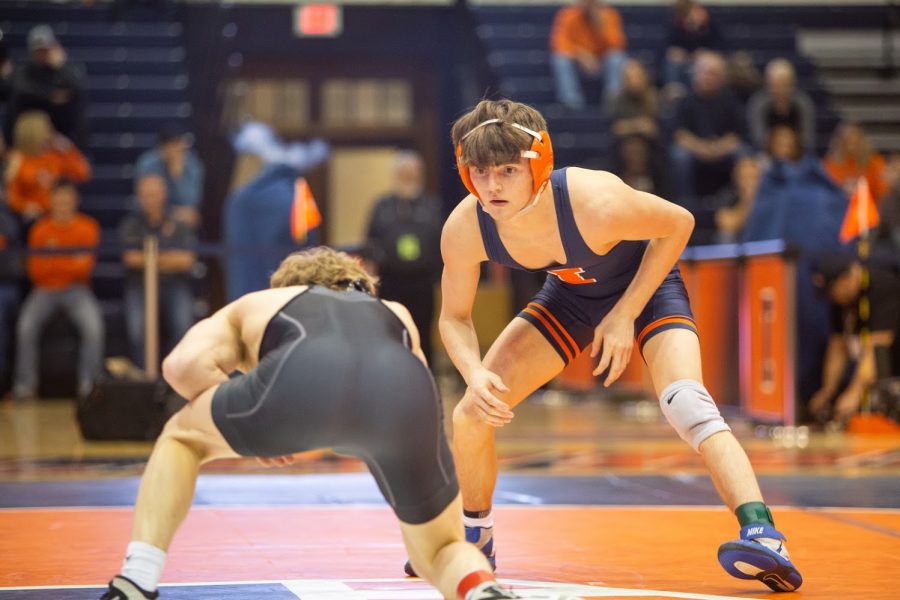 Freshman Justin Cardani looks at his opponent during the meet against Purdue on Feb. 16 at Huff Hall. Cardani has earned the No. 4 seed spot and holds a No. 19 national ranking.

The 106th Big Ten Wrestling Championships kicks off this weekend on Saturday and runs through Sunday in Piscataway, New Jersey. The Big Ten released preliminary seeds, ranking the 14 starting wrestlers in each weight class from every school competing in the conference. The rankings were decided through a vote from the conference’s coaches.

“We are going to have to score points at the Big Ten tournament,” said head coach Jim Heffernan. “Everybody is going to have to chip in … they need to have a great effort match-after-match because there is really nothing easy at that tournament. They have been doing this a long time, and I think that they’re all looking forward to getting a victory.”

Redshirt freshman Justin Cardani earned the No. 4 seed and is the first in the lineup at 125 pounds. He yields a 15-7 overall record on the season, and his national ranking is No. 19.

Senior Travis Piotrowski could be Illinois’ most serious contender in the tournament. Wrestling at 133 pounds, he’s the No. 4 seed and has a record of 23-2 this season. He hasn’t lost a single dual meet, going 14-0, and recently pinned No. 9, Sammy Alvarez in an earlier meet against Rutgers. Piotrowski is ranked as the No. 7 wrestler nationally.

Redshirt junior Dylan Duncan is the No. 7 seed at 141 pounds with a record of 17-8. He is nationally ranked at No. 15. Redshirt senior Mousa Jodeh will compete at 149 pounds and is the No. 13 seed. At 157 pounds, redshirt senior Eric Barone enters the Big Ten tournament as the No. 8 seed.

Redshirt freshman Danny Braunagel is wrestling at 165 pounds and enters the tournament as the No. 7 seed. His national ranking is No. 12, and his record this season is 20-6.

Redshirt senior Joey Gunther is the No. 7 seed for the 174 pounds weight class. His record this season is 15-6, and he’s ranked No. 15 nationally.

Redshirt freshman Zac Braunagel will be the 184 pounds wrestler and is the No. 7 seed. He enters the tournament with an 18-8 record and a No. 15 ranking nationally.

Redshirt sophomore Matt Wroblewski enters the tournament in the 197-pound weight class and is the No. 11 seed.

Freshman Luke Luffman will be the heavyweight wrestler and is ranked as the No. 9 seed. His record for the season is 15-8, and he is ranked No. 27 nationally.

The Illini earned a fourth-place regular-season finish in the Big Ten and coined a 6-3 regular-season dual record in the conference. The NCAA committee will choose the 47 undetermined qualifiers on March 10 for the National Tournament. Fourteen conference schools will compete starting on Saturday at 9 a.m. and can be seen through BTN+ or the Fox Sports app.