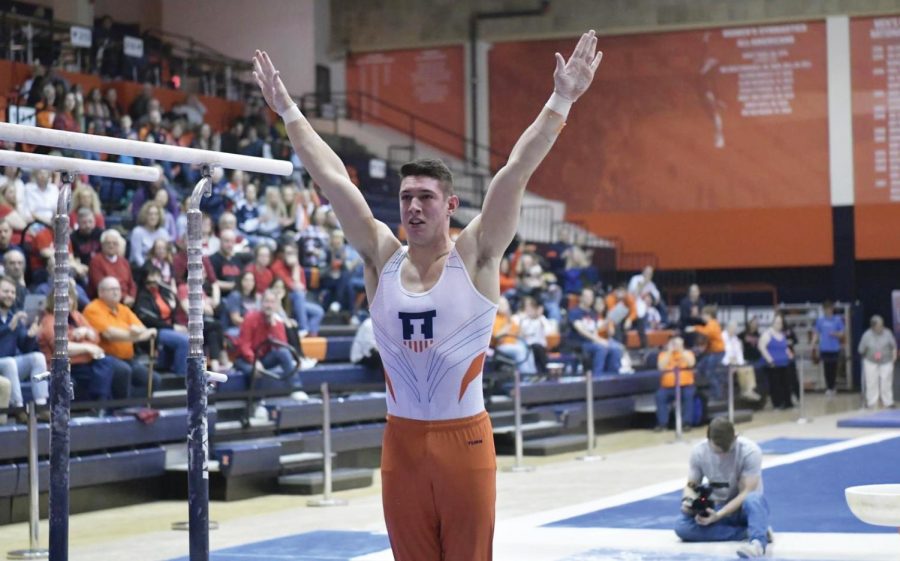 Senior Sebastian Quiana raises his hands after performing on the parallel bars at Huff Hall.

Since 1930, the Illinois men’s gymnastics team has competed in over 2,100 head-to-head matchups in dual meets, tri-meets and multi-team invitationals. Of those 2,100 matchups over the last 90 years, the Illini have tied their opponent only six times.

“It’s rare. It’s bizarre,” said head coach Justin Spring. “It gives support to what I’ve said over the last 10 years. Every tenth (of a point) matters.”

The way the tie became official was just as bizarre. After the last event, the scoreboard read 403.05-403.02 in Illinois’ favor, a very narrow win for the Illini. Spring subsequently walked over to Iowa head coach JD Reive to chat and discuss the meet.

“It’s crazy,” Reive said, per hawkeyesports.com. “The mathematical possibility of a tie happening is rare.”

As rare as ties are, Spring isn’t amazed by the outcome. He considers the tie to be a loss, both statistically and psychologically.

“We had the win, and it felt great,” Spring said. “Then it was a tie. It was a quiet bus ride back.”

“Our mistakes went down. This was one of our better hit percentages in our season,” Spring said. “I can be happy about that, but we’re missing so many of our heavy-hitting routines.”

One of those heavy-hitters is sophomore Hamish Carter. Carter injured his ankle on floor exercise, the second event of the Iowa meet, and Spring was unwilling to risk injuring Carter further. He pulled Carter from his remaining events.

Carter had an MRI on Tuesday. The results of the MRI were not available to The Daily Illini in time for publication.

Illinois returns to Huff Hall on Saturday for a tri-meet against Penn State and Michigan, two of the best teams in the Big Ten. Michigan has not lost a single competition this season, with a perfect 10-0 record (2-0 in conference). Penn State is 10-1 (2-1 in conference), suffering the first loss of their season last weekend against Nebraska.

Spring expects Penn State and Michigan’s team scores to be over 410 points, something Illinois has been unable to accomplish this season even with their best lineup.

“It looks like a daunting task, but we are a fighting team. Our team has surprised teams in the past,” Spring said. “I’ll expect nothing less from these guys to figure out a way to tweak their routines to make sure that if we’re not the highest-scoring team on the floor, we’re going to be the most consistent team on the floor.”