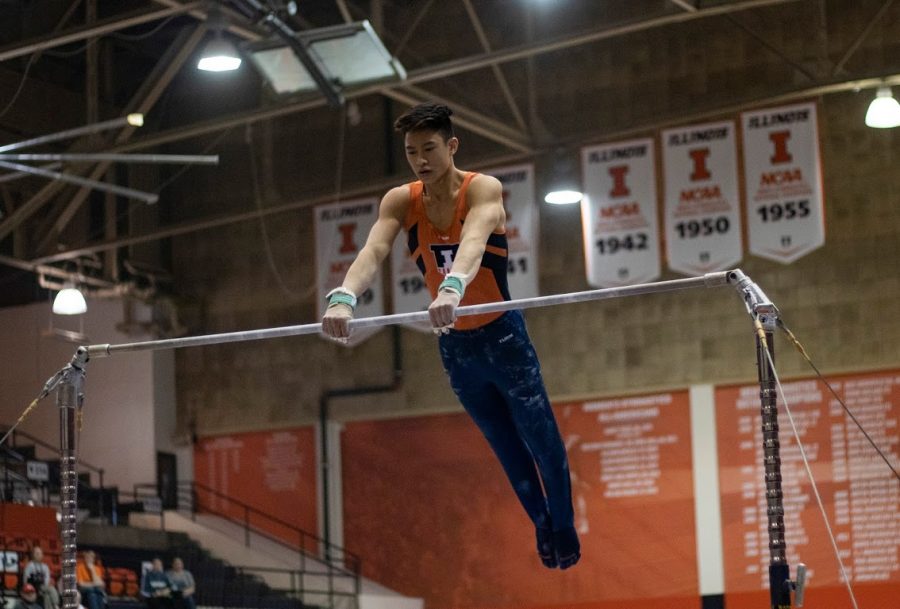 Freshman Evan Manivong competes in the high bar event during the meet against Penn State and Michigan on Saturday. The Illini prevailed over the Wolverines and the Nittany Lions with a score of 406.900.

Despite the win, head coach Justin Spring is troubled by a lack of consistency in his team. Illinois suffered a number of falls and mistakes during individual routines, but so did Michigan and Penn State, which allowed Illinois to stay close with them.

“It was a battle of who has the least falls,” Spring said. “Their hit percentages were something like 60%. Ours was probably about the same if not worse. We had a ton of mistakes, but we were able to edge them out.”

Two events Spring is particularly concerned with are pommel horse and still rings. Illinois competed on those apparatuses early in the meet and had a number of falls on them.

“We have to be better on those two events,” he said. “We could be the best team in the country on pommel horse, but we have not once this year hit five-for-five.”

That isn’t to say nothing good happened in those events. Senior Michael Paradise won the pommel horse event title with a season-high score of 14.950 while sophomore Ian Skirkey set yet another personal best on the event with 14.700. Senior Danny Graham also set a personal best on still rings while capturing the still rings title with a score of 14.550.

Another highlight on still rings came during senior Satchel Hudson’s performance. Hudson was almost finished with his routine when one of the leather rings snapped in half from the pressure Hudson was exerting on it, effectively ending his routine. The judges nullified the performance, and Hudson was allowed to restart his routine without penalty.

“The problem with that is he’s exhausted,” Spring said. “It was a true, game-changing moment when he, with the hard routine he has, got back up right after basically doing a full routine and hit it. That’s really hard to do.”

Hudson scored 13.600 on his second performance, which is slightly higher than the 13.55 he was projected to receive prior to performing.

Meanwhile, parallel bars and high bar, two events the Illini struggled on earlier this season, looked much better to Spring. Although Illinois had a fall on both events, the team finished strong here, holding onto a lead the team accumulated throughout the meet.

Senior Sebastian Quiana didn’t have the highest score on high bar, but his high bar performance was the last performance on any event of the meet. According to Spring, this can be tough for gymnasts.

“You build the whole event and you need to end with this really good routine,” Spring said. “He did it right at the end of the meet when we needed it. He handled that pressure like you’d expect a great senior to handle it.”

Quiana needed to score at least 11.750 to edge out Michigan for first place. He stuck the landing and scored 13.550, sealing the victory for Illinois.

“I just went up there, trusted my training, and did that routine to the best of my ability,” Quiana said.

As the crowd in Huff Hall erupted in cheers, Quiana looked into it. As a senior on Senior Day, the emotions were high for him.

“It was an unbelievable feeling,” he said. “I’ve never felt something like that before. I felt good about hitting that set.”