Illini to compete in Puerto Rico 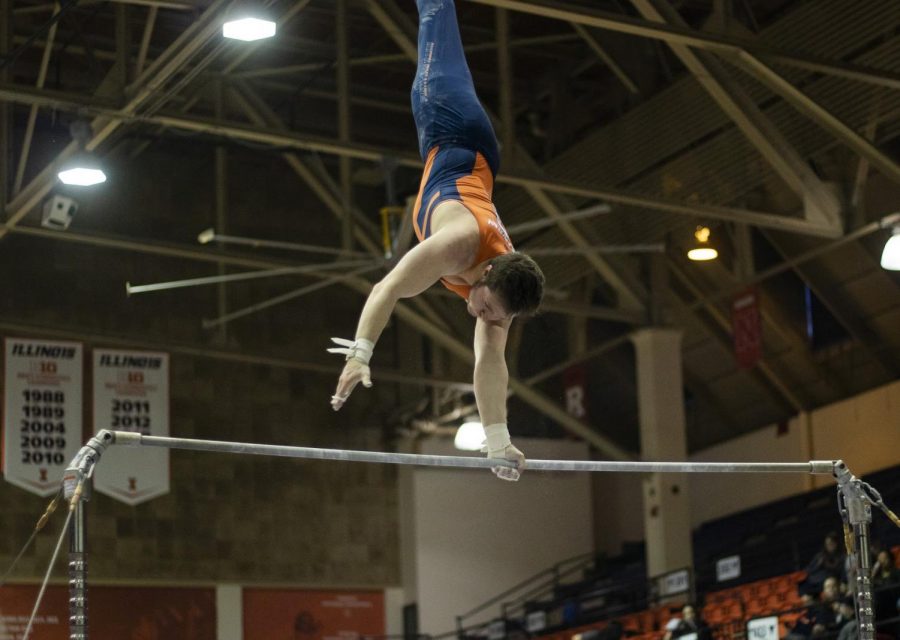 Junior Zach Treadway competes in the high bar event during the meet against Penn State and Michigan on Saturday. The Illini left on Wednesday to compete at the Puerto Rico Invitational this weekend.

The Illinois men’s gymnastics team usually travels to its competitions via charter bus, but on Wednesday, the team had to fly to the location of its next competition: San Juan, Puerto Rico.

The team was awake at 5 a.m. on Wednesday to catch a bus to Chicago, where the Illini boarded a plane bound for San Juan. On Saturday, the Illini will face the Arizona State Sun Devils and the Puerto Rico national men’s gymnastics team in the Puerto Rico Invitational.

This is the third-ever trip to the event for the Illini, who last competed in Puerto Rico three years ago. The Illini claimed first place with a score of 409.450, defeating Michigan and Arizona State.

“They’re amped. They’ve never been more excited for a trip,” said head coach Justin Spring of his gymnasts. “It’s a great experience as a competition and for team-bonding as well.”

Sophomore Hamish Carter has never been to Puerto Rico before.

“It’s exciting to visit a new place in the world,” Carter said. “Everyone is really excited to represent the Illini outside the States.”

In 2017, the Illini bonded as a team over snorkeling and some beach time. This year, along with the beach, the team will do some sightseeing in downtown San Juan and visit Toro Verde Nature Adventure Park, home of the second-longest zip line in the world.

Carter also wants to take the opportunity to face associate head coach Daniel Ribeiro in a few games of chess.

“I’ve recently gotten into playing chess, and Daniel is an avid chess player as well,” Carter said. “I’m definitely going to bring my chess board and play with him on the beach and when we travel around the island.”

As for the competition itself, Spring wants to take the opportunity to experiment with his gymnasts’ routines ahead of the team’s last Big Ten dual meet against Ohio State the following weekend.

Although he traveled to Puerto Rico, Carter might not compete this weekend. Carter injured his ankle while competing against Iowa on March 1 and was described as “day-by-day” by Spring.

“It swelled pretty heavily the first couple of days after. It was very painful to walk on,” Carter said. “As I got back into the gym doing rehab on it, the swelling went down immediately and got rid of 90% of my pain.”

An MRI revealed no significant damage to Carter’s ankle, giving him and the team hope that he will compete in the Big Ten and NCAA championships. Carter sat out of the team’s tri-meet against Michigan and Penn State last weekend, but he is hopeful he can compete in Puerto Rico.

“Maybe on pommel horse, where the landing isn’t as heavy as others. I still have to make lineup,” Carter said. “It’s not like I’m gonna walk back into lineup. If I train well, I think we’re all pretty hopeful that I can be back and competing at the Puerto Rico Invite in whatever capacity I can.”