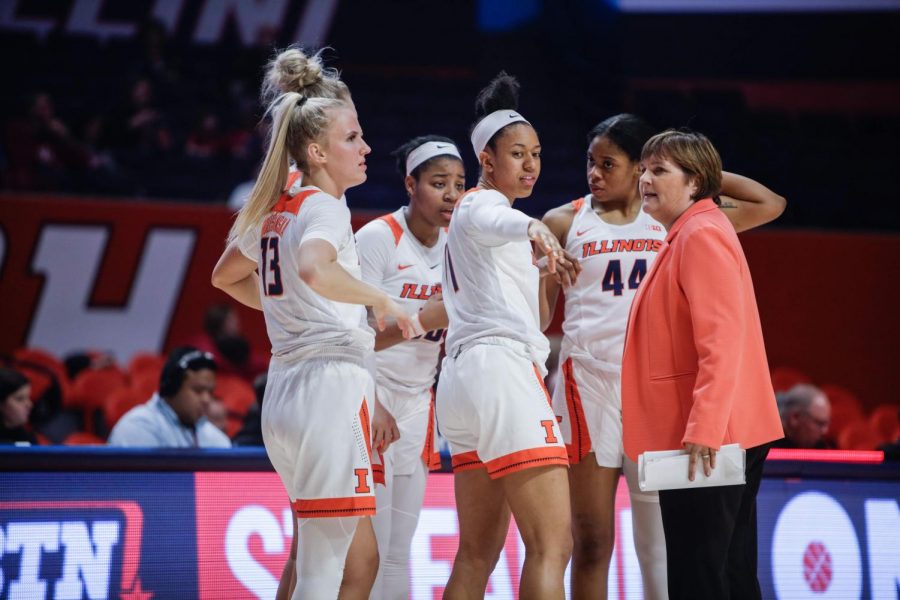 The Illini join in a huddle during their game against Indiana on Feb. 13. Illinois lost the game 59-54.

The women’s basketball team’s season came to a close March 4 at the Big Ten tournament. The Illini bounced out of the tournament with a 71-55 loss to the Wisconsin Badgers.

In a season riddled with Big Ten struggles and team injuries, there were some high points. Illinois began the season on a positive note, starting 3-0 before losing to in-state rival Illinois State, 74-58. Illinois wrapped up a non-conference schedule with a 58-51 win against Missouri in the Braggin’ Rights game.

“Mizzou’s one of our biggest rivals,” said Petra Holešínská, redshirt senior guard. “I feel like getting the win, especially at their place, was pretty special.”

“It feels really good,” Holešínská said after the Penn State game. “We knew that we could definitely beat Penn State, and I think we had a really good game.”

It would be the last win the Illini got this season. It would also be the last time the Illini scored more than 60 points in a game. Illinois finished the season 0-7 after the Penn State win.

Illinois played a competitive game against Indiana but ultimately dropped the ball in the closing minutes, losing 59-54. It would also be the last time Illinois held an opponent to fewer than 70 points.

Illinois then dropped a senior day matchup to Purdue, 70-58. Road trips to Michigan and Nebraska gave Illinois a pair of losses heading into the team’s final home game against Michigan State. The Illini last defeated the Spartans in 2014, and the skid continued as the Illini lost by 14.

Illinois concluded the regular season against Northwestern in a 75-58 rout. The Wildcats clinched the Big Ten regular-season title in the game against the Illini.

Illinois entered the Big Ten Tournament as the No. 13 seed, matching up against No. 12 seed Wisconsin. Illinois started the game off strong, with an 11-11 tie. However, the team continued its slide one final time and were outscored 60-44 the rest of the way.

Holešínská had a remaining year of eligibility at Illinois as she sat out last season due to an ACL tear but tweeted Wednesday that she will be leaving the program.