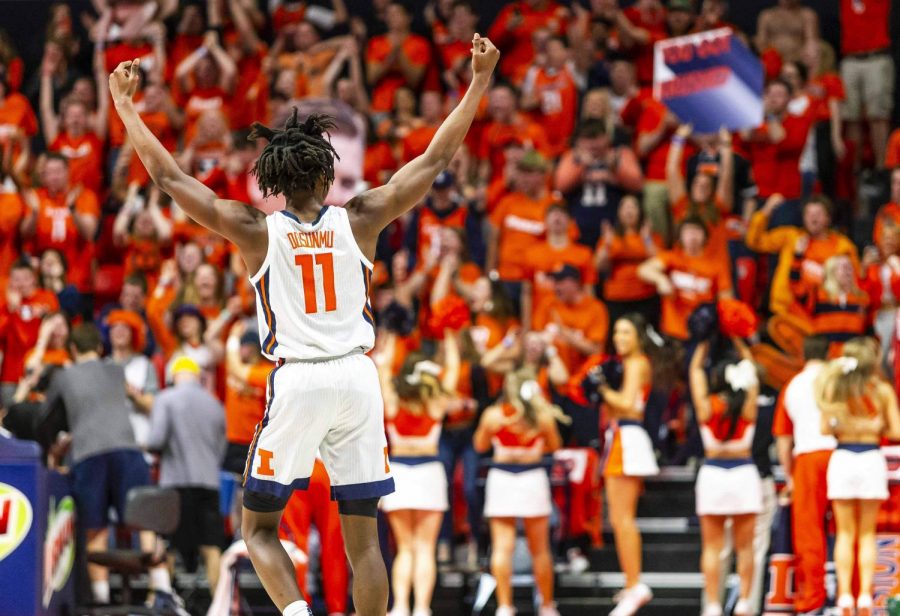 Ayo Dosunmu hypes up the crowd at State Farm Center during the game against Iowa on March 8. The Illini beat the Hawkeyes 78-76 in what might have been Dosunmu’s last game as an Illini.

March 11 will always be remembered as the day the sports world halted. After Utah Jazz center Rudy Gobert tested positive for COVID-19, the NBA suspended its season, becoming the first major U.S. sports league to do so. The next day, the MLB and NHL both suspended their seasons, with the NCAA also canceling the rest of its competitions for all sports through the remainder of the academic year.

These suspensions will have ripple effects that will be seen far into the future, including the NBA draft. The NBA has not released a statement regarding how the pandemic will affect the draft yet, given the draft will not take place until June 20, and the season has only been initially suspended for 30 days. However, the NFL has already started changing its rules for its draft, ending in-person college player visits. If the pandemic continues, the NBA might do the same.

With the cancellation of all NCAA basketball games, many conference tournaments were not finished, and there was no March Madness tournament. The excitement March brings every sports fan has been taken away, but it also limits what NBA scouts could have seen from prospective players.

You can play the ‘what if’ game with a lot of players who strengthened their draft stock through the tournament. What if we never saw Steph Curry lead Davidson to the Elite Eight in the 2008 NCAA Tournament? What if we hadn’t seen “Cardiac” Kemba Walker hit the game-winning step-back midrange shot in the Big East semifinal in 2011, which helped lead his team to the Big East Championship?

These situations, along with countless more, come up when thinking about the importance of having tournaments and their impact on the players’ draft stock.

This hits home to Big Ten fans when you look at Bleacher Report’s March 4 mock draft, which only includes one Big Ten player, Maryland sophomore center Jalen Smith, going in the first round at No. 27. The mock draft leaves out players like Big Ten Player of the Year Luka Garza from Iowa and First-Team All-Big Ten recipients Ayo Dosunmu (media) from Illinois, Cassius Winston from Michigan State, Lamar Stevens from Penn State and Anthony Cowan Jr. from Maryland (coaches).

These players could have raised their draft stock through the gauntlet of what would’ve been the last three rounds of the Big Ten tournament but also could have proved themselves against teams outside of the conference in front of the entire country during late March and April.

The cancellation of games will likely not affect players who have become draft favorites throughout the NCAA regular season like Georgia guard Anthony Edwards, who averages almost 20 points per game on 40% shooting, and Dayton big man Obi Toppin, who has led Dayton to NCAA prominence this season.

It was not a secret that when Dosunmu decided to come back for the 2019-2020 season, it would probably be his last. When Illinois defeated Iowa in their last home game of the year, Dosunmu waved at the home fans at State Farm Center, making Illinois fans realize that might have been the last time he’d play there.

Now that there will not be an NCAA tournament, that might have been the last time Dosunmu put on the Illini jersey.

Dosunmu showed he could develop into a good pro prospect from his improvement in his second year. The 6-foot-5-inch guard raised his scoring by almost three points per game and his shooting efficiency from 43.5% to 48.4%, while still maintaining 4.3 rebounds and 3.3 assists per game.

Dosunmu also thrived in late-game situations this year, being able to take on the closer role almost every time the Illini needed it.

His outside shooting ability is not the most desirable, but Dosunmu’s long frame, ball-handling ability, defensive quickness and mentality, transition scoring and passing ability indicate he could translate into a successful NBA prospect. If Dosunmu was able to make a few game-sealing plays to help Illinois go on a run in the tournament on a national stage, his draft stock would have undoubtedly rose more.

Big Ten Freshman of the Year Kofi Cockburn, Illinois’ center, may need to develop more ways to score to be versatile enough to enter the NBA draft, But, he probably has, at the very least, thought about becoming a one-and-done player after his historic first season.

Cockburn is another player who could have created interest from having a few good games in the tournament. While Cockburn’s scoring ability pretty much stops outside the paint, his rebounding strength and his ability to contest opposing shots show he could be a good defensive player for years to come who could still score at the rim and draw double teams when he gets the ball down low.

Players outside of the NCAA

As basketball continues to grow into a global game, with players like Luka Dončić making it more mainstream to draft European talents early in the draft, there has been a lot of focus on European players this year.

Big-name international players like LaMelo Ball and RJ Hampton, who are both Americans, played in Australia this season and have finished their seasons and returned to the U.S. Their draft projections of both being top-ten picks are pretty much solidified at this point.

It will be interesting to see how NBA scouts evaluate talents like Israeli player Deni Avdija, American-born Killian Hayes, who plays in Germany, and Serbian Aleksej Pokuševski, with Europe being one of the places most affected by the virus. If the NBA suspends team-related travel like the NFL, it might be hard for scouts to meet and evaluate these players as the draft approaches.