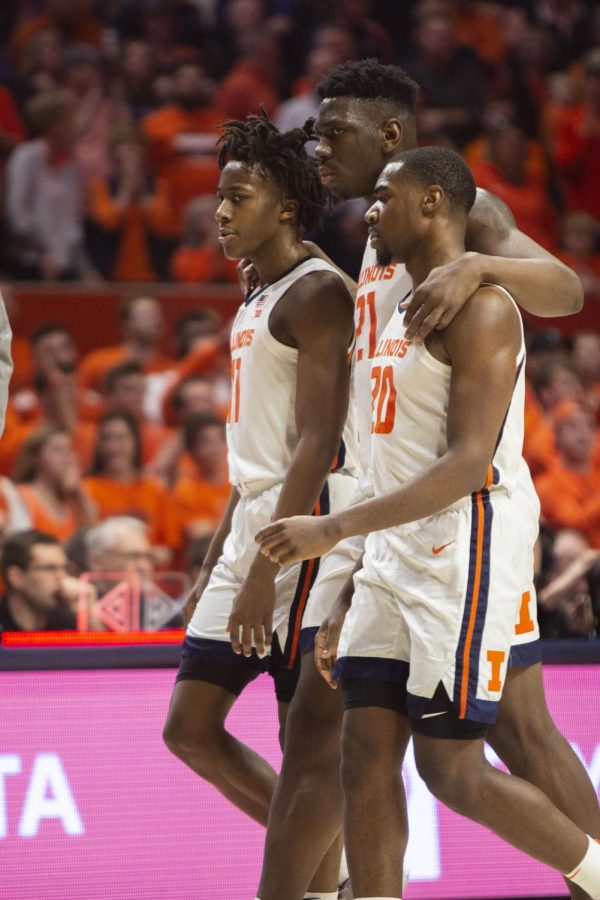 Ayo Dosunmu (left), Kofi Cockburn (middle) and Da’Monte Williams (right) head to the sideline during the game against Iowa on March 8. The Illini defeated the Hawkeyes 78-76.

In a typical college basketball season, only four Division I teams come out victorious in the final game they play, the winners of the CollegeInsider.com Postseason Tournament (CIT), College Basketball Invitational (CBI), National Invitation Tournament (NIT) and, of course, the NCAA Tournament. If one had told fans back in the offseason that the 2019-20 Illini would win their final game of the season, supporters would have looked at the returning talent, incoming players and general trajectory of the program and been salivating over the prospect of a national championship.

However, the 2019-20 season was not a typical one, and Brad Underwood’s team did not have the slightest bit of a clue that their victory over Iowa on March 8 would be their final game. Just a few days later, on March 12, the Big Ten canceled its postseason basketball tournament due to COVID-19 precautionary measures, and the NCAA followed suit soon after, canceling competition across all sports to fall in line with practically every other sporting league around the world.

As a result, the Illini won’t have the opportunity to compete for an NCAA championship this spring, which stings especially hard in 2020, a season in which there were no dominant teams in college basketball and the competition for the championship was wide open. Given that a team with elite guard play has won the national championship in every season since 2012-13, it would have been intriguing to see sophomore guard Ayo Dosunmu put it all on the line in a win-or-go-home scenario.

The toughest part of the coronavirus pandemic across the globe, not just in the context of sports, are the many questions being asked that cannot yet be answered. College basketball is no different.

What will happen to seniors’ eligibility?

Will incoming freshmen’s scholarships be affected by seniors possibly staying?

What does this mean for the NBA draft?

While none of those concerns can be addressed yet, what is known is how Illinois basketball got to this point.

Well before the country was on potential national quarantine, the Illinois basketball program took a summer preseason trip to Italy from Aug. 4-14 as part of the foreign trips every Division I team is allowed to take once every four years. The team, minus freshman Kofi Cockburn and senior Andrès Feliz, due to passport issues, went 3-1 on the trip, building chemistry ahead of a season that needed to be a resurgence.

“Because of the trip to Italy and the ten days of practice, of which eight were two-a-days, the ten days in Italy and the games, we feel like we’re in a really good place in terms of being ahead,” Underwood said at Big Ten Media Day.

It was a rocky start to the season, as Illinois limped to narrow wins at home against Nicholls State and on the road at Grand Canyon to open the year, before falling to then-ranked No. 21 Arizona, 90-69. The Illini could not control the Wildcats’ precocious freshmen, as Nico Mannion, Josh Green and Zeke Nnaji combined for 62 points. It didn’t help that Illinois turned the ball over 22 times either.

“There’s nothing we can do about this game but learn from it and get better,” said junior guard Trent Frazier. “It was a great experience for these freshmen, and that’s a great basketball team over there. We’re gonna learn from this and clean up those turnovers and get better.”

After a disappointing showing at home against Miami (Fla.) in the ACC-Big Ten Challenge and a heartbreaking choke job at No. 3 Maryland, things seemed to be trending downward for Underwood’s job security, but Illinois would soon turn things around.

On Dec. 11, the team bunkered down and came out victorious, 71-62, in an ugly matchup at home with No. 5 Michigan, as both teams struggled to make shots. Cockburn led the way with 19 points and 10 rebounds, as the Illini looked to be back on track.

“It looked like basketball before the three-point line, but (I’m) really proud of my team,” Underwood said. “I’m really proud of these guys I think that as difficult as (the loss at Maryland was), and yet we played so well.”

Following the win, Illinois proceeded to go 9-2 in its following 11 games, earning a place in the Associated Press’ Top-25 rankings for the first time under Underwood. Along the run, the Illini coined a moniker that would be used time and time again this season known as “roadkill,” as they came out victorious in the Kohl Center, Mackey Arena and Crisler Center, three arenas visiting teams don’t often succeed in.

The biggest moment of the winning run easily came at Michigan on Jan. 25, as Dosunmu scored 27 points and drilled a dagger to win the game, 64-62, with less than a second remaining, finally establishing himself as a player worthy of the preseason hype many had bestowed upon him.

“In situations during practice, I take and make it and I put a lot of reps in,” Dosunmu told Andy Katz following the performance. “I just try to have that mentality (in the) late game to close it out, trying to just get the victory for my team making the right plays. I got to my spot, and I just elevated and knocked it down.”

Though the team was flying high heading into February, three straight losses to Maryland, Iowa and Michigan State, and a potential catastrophic injury to Dosunmu, began to cause concern in and around the program.

As a result, Underwood decided to remove sophomore forward Giorgi Bezhanishvili from the starting lineup in favor of junior guard Da’Monte Williams, building a small lineup around Cockburn.

Following Dosunmu’s return after the injury scare was ultimately proven harmless, the new lineup took off, and Illinois closed the season on a 5-1 run, winning at No. 9 Penn State and then avenging the emotional loss to Iowa to close out the regular season.

The season finale win over No. 18 Iowa was especially satisfying for No. 23 Illinois, as tensions had escalated between the two teams in the previous matchup in Iowa City regarding some disputes over late-game fouling. They caused Iowa coach Fran McCaffery to remove his team from the postgame handshake line despite winning the game. The extracurriculars didn’t stop the second time around in Champaign, including a confrontation between Williams and Iowa’s Connor McCaffery, but a late defensive stop on Hawkeye standout Luka Garza allowed the Illini to rub in the victory this time around, as Underwood was seen autographing a sign with McCaffery’s face on it that read “triggered” as he exited the court.

Heading into the Big Ten Tournament, the feeling within the program was one of extreme optimism. Dosunmu was honored as a First-Team All-Big Ten choice by the media, and Cockburn was named Big Ten Freshman of the Year. Beyond individual accolades, the Illini secured the fourth seed in the conference tournament and looked primed to make a run with both the conference and NCAA tournaments on the horizon.

“I’m feeling great, put a lot of work in and a lot of sweat into my game,” Dosunmu said. “The team is feeling great; we’ve had a lot of good practices. We’re about to get ready (to) head down there (Indianapolis) today (to) get locked in mentally (to) try and win these games.”

It was when the Illini made the trip to Indianapolis that the news started to break. First, it was only announced that games would continue to be played without fans, but many could see the writing on the wall, and eventually, the rest of the season was canceled across all winter and spring college sports.

The shock is still so fresh. Less than one week ago, nearly every power conference was beginning to hold first-round games of its tournaments after many mid-majors had already crowned their automatic bids. And just one week later, sports at both the college and professional ranks around the world are either canceled or postponed for the foreseeable future.

Each day, new rules and regulations concerning the coronavirus are being released by every nation’s governments, likely meaning the NCAA won’t be able to address the questions many are asking until the U.S. Government sets in place a firm protocol to deal with its spread.

The status of the Illinois roster is certainly a topic of conversation. It’s unknown whether or not seniors Kipper Nichols and Andrés Feliz will come back, or if they will even be allowed to. Some may wonder whether or not Dosunmu, who made playing in the NCAA tournament his main motivation for returning for his sophomore year, will decide to come back for more unfinished business, and how that could affect the recruitment of four-star guard Adam Miller, who has yet to sign his National Letter of Intent.

Each of those questions will be answered in due time, but for now, it’s time to not only sit back and positively reflect on arguably the most successful Illinois basketball season in a decade but also appreciate the work of all college athletes, especially seniors, as their careers have unfortunately been sacrificed as the world begins to fight this deadly pandemic.

“Probably one of the more difficult conversations I’ve ever had to have with a team, nothing’s easy in those moments,” Underwood said. “You feel for Kipper, Tyler (Underwood), Sammy (Oladimeji) (and) Andres Feliz. We were an NCAA tournament team, and there was no doubt about that.”

“You can put an asterisk by it, you can put whatever you want, I think it’s the first time since 1938 there won’t be a national champion,” Underwood said. “I said it after that last game here, my gratitude for that group of guys will always be remembered. I made a comment to Josh (Whitman) yesterday that in all my years and however many more that I have in me, this team I will always remember, and it won’t be because we didn’t play in the NCAA Tournament and the NCAA Tournament didn’t happen. It’ll be because of all the fond memories and all the hard work and all the character and all of the wonderful adjectives that go with a team. I had fun this year.”