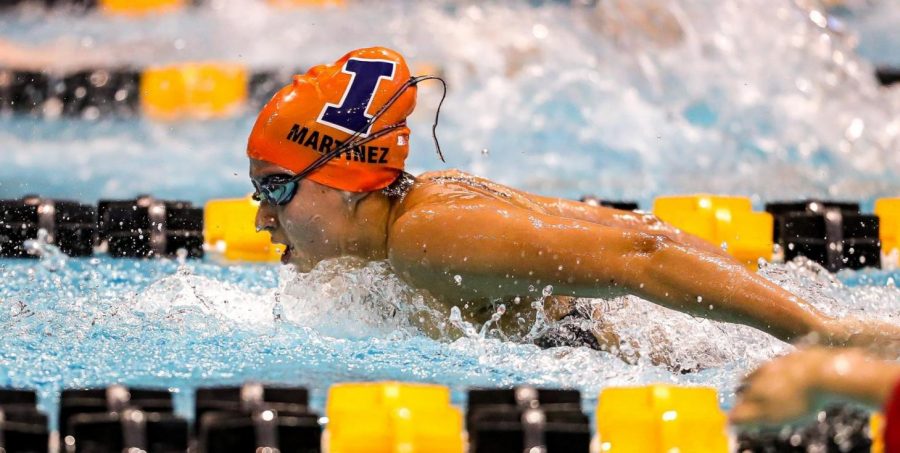 Junior Jimena Martinez swims at the University of Iowa Natatorium on Jan. 11.

Before the Big Ten made the decision to cancel all sports for the remainder of the semester, the swim and dive team was able to compete in at least one day of the three-day CSCAA National Invitational Championship and NCAA Zone C Diving Championship.

Before the cancellation of the invitational, all 11 Illini were able to compete in the first and only day of competition.

Highlights of the meet included Kale competing in the B-final of the 50-yard breaststroke, earning the time of 29.48 and a 17th place overall finish. Aegerter finished 19th place overall in the 500-yard freestyle and competed in the B-final with a time of 5:02.96. In the A-final of the 50-yard backstroke, Salafatinos finished in sixth with a time of 25.67 seconds.

Only Shegos was able to compete at the NCAA Zone C Diving Championship in the 1-meter board, earning a total score of 207.30, placing 49th overall.

Despite the abrupt ending, the swim and dive team earned some impressive accomplishments over the season, even if the team result wasn’t dazzling.

The team ended with a 4-6-1 record overall including a 2-0-0 record at home, winning against Indiana State, Illinois State University and Southern Illinois University.

In the first meet of the season against Indiana State, Shegos immediately broke the school record on the 1-meter board with a score of 299.47, helping her qualify for the NCAA Zone Championship.

Although the team may have come 13th overall in the Big Ten Championship, the Illini recorded 11 career-best and five season-bests.

Senior Kristin Anderson swam the fourth-fastest 50-yard freestyle in Illini history with a time of 22.74.

Shegos made history on the second day of the championship, earning the No. 1 seed in the 1-meter dive in the preliminary round, scoring a total of 289.00. In the A-final, she finished in eighth place with a score of 239.25.

As for the 3-meter dive, Shegos also made the A-final, earning eighth with a score of 261.90 while also earning the same place in the preliminary round, scoring 281.85.

Redshirt senior Aby Olsen earned a 22nd place finish in the C-finals of the 100-yard backstroke with a time of 54.38.

Outside of the pool, Cabush earned a Big Ten Sportsmanship Award on the Friday of the Big Ten Championship.