This reminds me of “The Year Without a Santa Claus” 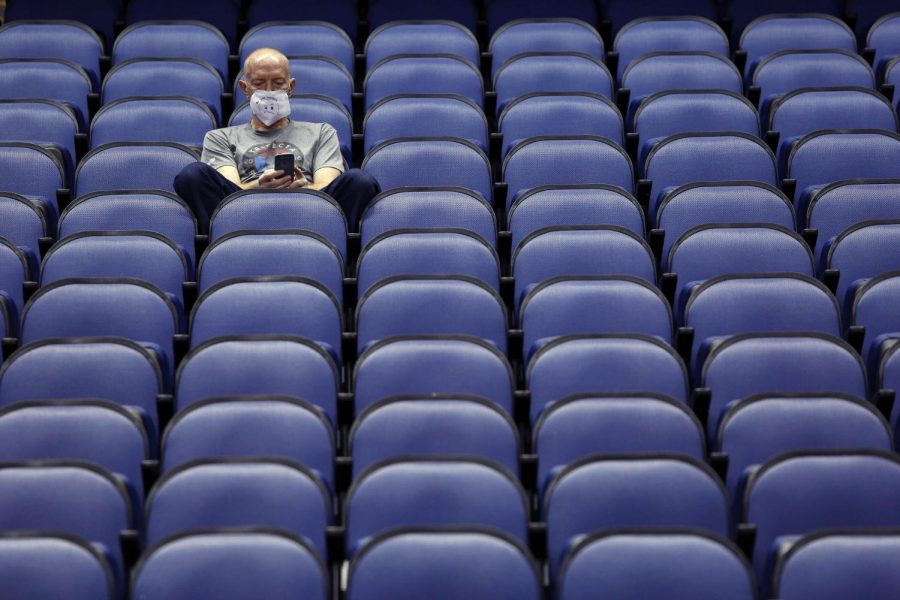 Mike Lemcke, from Richmond, Va., sits in an empty Greensboro Coliseum after the NCAA college basketball games were cancelled at the Atlantic Coast Conference tournament in Greensboro, N.C., Thursday, March 12, 2020.

For readers who don’t celebrate Christmas and/or have no idea what I’m referring to, “The Year Without a Santa Claus” is a story about what happens to the world when Santa takes a sick day. The animated made-for-TV movie ends with Santa’s predictable but valiant return, saving children all over the world from a Christmas morning without presents.

Although the analogy is grim, this is how I currently feel living in a world without sports.

Let me disassemble the obvious problems with this comparison. It’s barely spring and certainly not Christmas time. We’re, unfortunately, not part of an animated movie – I’m sorry, I know that’s a shock to some of you. The hiatus of one man pales in comparison to billion-dollar industries screeching to abrupt and chaotic halts. Lastly, I know Santa missing Christmas isn’t exactly the best point of reference when talking about a global pandemic and a disease that’s killed thousands of people.

But, the principle of change and having to live without something dearly beloved, like Santa, is a pill we were forced to swallow almost five days ago.

On March 12, the sports world stopped turning. The NCAA canceled March Madness, and if that wasn’t unprecedented enough, the league also pulled the plug on all competitions until the end of the semester due to concerns over the spread of COVID-19. The Big Ten followed suit with its own declaration last Thursday, canceling all athletic activities through the end of the semester, effective immediately.

And it didn’t stop there.

The NBA suspended its season and had about 21% of regular-season games left to play, not including the playoffs. Titans like the MLB and NHL paused their seasons and athletes began testing positive for the coronavirus. Multiple nightmarish decisions ultimately prompted a nation-wide shutdown in the world of sports.

If you’re one of the few Americans untouched and unfazed by the recent series of cancellations in nearly every corner of the sports world, consider yourself lucky. Still, even those directly unbothered by a spring sans sports are still feeling the economic disarray created when a $71 billion industry packs up shop.

College athletes at every level were metaphorically ripped from their respective sports last Thursday. Seasons were wiped away in an instant. The years and hundreds of hours poured into athletes’ careers were rendered worthless. In the case of the Illinois men’s basketball team, an entire regular season hinged on hopes of returning to the NCAA Tournament for the first time since 2013 was lost.

Thankfully, college athletes got some form of relief Friday. The NCAA announced that athletes competing in spring sports would be gifted an extra year of eligibility. But, is that enough?

A slew of winter sports such as men’s and women’s basketball, wrestling and swimming and diving were deprived of their postseasons. The Illinois men’s basketball team was slated to play in the Big Ten Tournament Friday afternoon before it was canceled. Seven Illinois wrestlers qualified for the NCAA Championships which were scheduled to begin this Thursday. Some of those who qualified won’t ever wrestle again.

What happens to the thousands of hours and years of commitment these athletes have poured into their sports? I’m all for enjoying the journey, not just appreciating the destination. Yet, destinations mean a lot in sports, especially at the college level. Big postseason outings like NCAA March Madness – which brings in three-quarters of the organization’s yearly revenue – can change the course of individual careers and impact entire cities.

What college athletes, especially men’s basketball players, lack in monetary compensation is gained in exposure on national stages like March Madness. However, economies in cities such as St. Louis, which was poised to host a round of the NCAA men’s hoops tourney, are at a loss. Individuals and families dependent on the incomes made working in stadiums, arenas and athletic departments were told to wash their hands and go home too.

A spring without sports doesn’t just affect those who play the game. The cancellations affect everyone involved, including fans.

Sports are often touted as a form of relief – an escape from everyday life. But not this time. Although amateur and professional sports have endured some of the worst disasters in American history, the coronavirus pandemic is a different breed of beast.

While sports will undoubtedly return, the question still remains as to when. The restoration of sports as we know them probably won’t be as slick as Santa’s return in “The Year Without a Santa Claus,” but I’d argue that it’ll be about 10 times more exciting.

Meghan Rest is the former sports editor of The Daily Illini