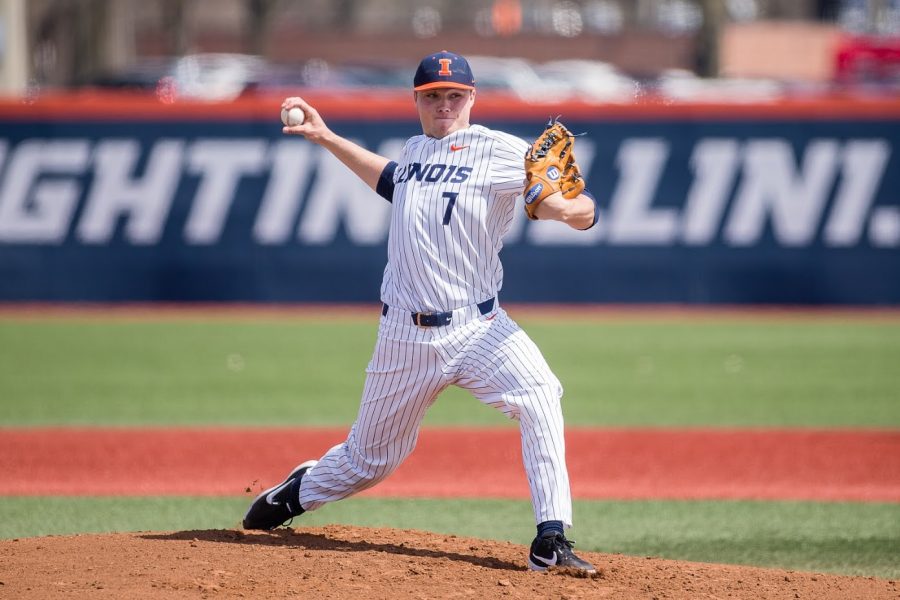 Illinois starting pitcher Ty Weber (7) delivers the pitch during game one of the doubleheader against Maryland at Illinois Field on Saturday, April 6, 2019. The Illini won 5-1.

In the wake of quite possibly one of the greatest years for Illinois sports in recent memory, the widespread effects of the COVID-19 outbreak hit fans and teams close to home last week when the Big Ten announced the indefinite suspension of all sports competitions. Just like the other players, coaches and fans for all sports, Illinois baseball is struggling to pick up the pieces and make sense of this unprecedented situation.

The effects have hit everyone differently, and in most cases on a personal level as shutdowns around the globe have become a daily part of media stories. Illinois head baseball coach Dan Hartleb is no different as he tries to give his team hope for the future.

“I would say the only time I’ve absolutely had that helpless feeling is 9/11, but even that didn’t affect our season as far as complete overnight change,” Hartleb said. “I don’t think anyone in our generation has experienced that feeling aside from tragedy and death in our personal circles. I do believe, and what I told our players, is this is something that will humble our country and make people appreciate things that we take for granted and, hopefully, when this is all said and done, we’re a stronger country.”

Players found out the season ended during practice last Thursday as they were preparing for three games in Carbondale against Southern Illinois University.

“We found out at the beginning of practice we were not going down to Carbondale anymore and going into practice we were seeing other conferences starting to shut down their season,” said senior closer Garrett Acton. “I think we were all kind of preparing for the Big Ten to do the same, and it seemed like it was a matter of time. Obviously, this wasn’t the outcome anybody had expected for our season, so it’s been chaotic.”

With the spring college baseball season essentially being limited to a fraction of its usual length, it is uncertain how next season will look even from a roster point of view. Seniors in their last year of eligibility will likely have the option to play another year, which would leave roster numbers, as well as the matter of several other issues that come with, to be logistically worked out by the NCAA. Hartleb said these potential changes in eligibility could impact teams for five years to come as it would have to change scholarships and roster size.

This is not even to mention junior college athletes who may be transferring into universities after two years.  In the past, those athletes were given two years of eligibility to play at their new school. Hartleb said he believes those athletes will be given three years in the wake of the situation at hand. It is unclear if Illinois will be receiving any junior college athletes for next year’s roster, but Hartleb did say the next batch of recruits from the 2020 class has already been selected.

“I’m one of the few people in the country that will not go out and recruit 40 guys per class and start cutting guys and pulling scholarships, so we’re basically done with our incoming class,” Hartleb said about next year’s roster. “I’m excited about the new class and with them coming in and guys coming back, we’ll have a lot more depth next year which is good because that creates competition and it’s also going to give guys an opportunity to not be rushed in the process.”

A lot of times managers and coaches must make decisions on which players to put in the lineup on a given day that may be ideal for the team to win, but not for certain athletes in their development long-term.  Having roster depth could eliminate some of those situations while also giving younger players more opportunities to learn from current seniors should they choose to return.

Hartleb has tried to lead the team in a positive way after the abrupt end to a so-far exciting season, saying that everyone was basically given a “redshirt year.”

“I know guys were extremely disappointed, and I think they know something was taken away from us, but we’re not going to sit on it,” Hartleb said about meeting with his team. “We’re going to find a way to be better, both as human beings and as athletes moving forward.”

Players will continue to work out on their own and stay in shape for the possible summer league play. Acton and senior starting ace Weber both said they have not stopped doing individual work and the team has been in consistent communication about their plans to do the same during this extended offseason.

With seniors like Weber and Acton possibly already throwing their last games in Illini uniforms, Hartleb isn’t pushing the issue of the duo potentially returning next season.

“I made a general statement to those guys, but we’re going to wait and see,” Hartleb said. “I don’t think it’s fair to have those conversations yet. We’re less than a week out from those guys having their world turned around on them, so I want to give them some time to digest things a little bit and let things settle down until emotions aren’t as high.”

The last game of the season was a bittersweet way to prematurely end a season, as Acton broke the Illinois saves record and put the Illini’s record at 8-5. Acton, Weber and sophomore Branden Comia all started the season putting up elite numbers and will reflect with not only their teammates but also athletes around the world on what the future might hold, as the volatile situation is ever-changing.

“It has been a bit disheartening, and it’s an unfortunate situation, but I think the Big Ten, the NCAA and our athletic department has made the right decision,” Acton said. “Obviously it’s a tough decision to cancel spring sports, but I think the leadership we’ve seen under Josh Whitman has been impeccable, and they’ve really proven their character in how much they care about their athletes in how they’ve taken charge in this whole process.”

MLB has delayed its season for at least another eight weeks as the Centers for Disease Control and Prevention issued a statement urging the cancellation of events consisting of 50 or more people for that same eight-week time frame.