A ‘no’ we need to listen to: Sports suspended for season 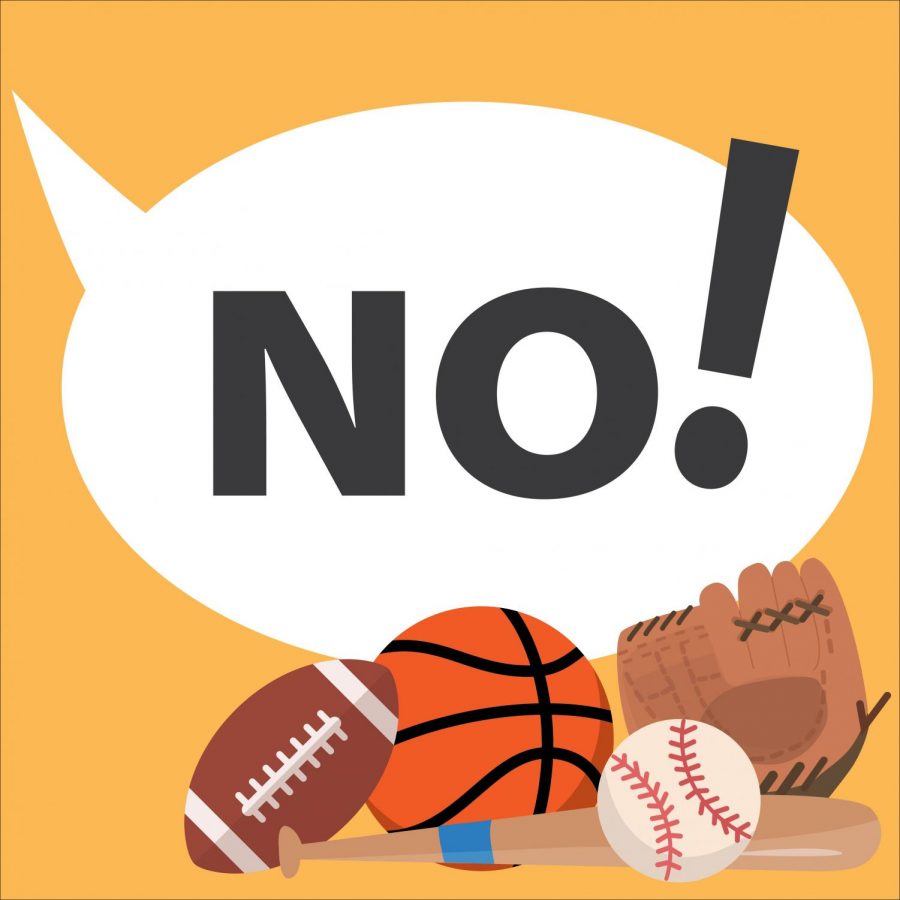 Most humans have one thing in common: we hate being told “no.”

Granted, this isn’t the human race’s only uniting factor, but it certainly plays a role in how we solve problems, especially in times of crisis. For humans who happen to enjoy sports, this concept should seem pretty commonplace.

Competition, whether you’re playing under Friday night lights or gunning for a gold medal at the Olympics, is almost always defined by good or bad outcomes. You win or you lose. For every winner, there’s ultimately a loser – or, in some cases, losers.

It’s the binary nature of “win” or “lose” that has characterized sports for centuries, and it’s the idea of “yes” or “no” that’s shaped a lot of our human behaviors.

Winning and being told “yes” symbolize similar ideologies. For example, hearing the word “yes” usually translates into approval or indicates greater potential – “yes,” you got the job, or “yes,” you’re accepted to the University of Illinois, for example. Winning, especially in the world of sports, usually means moving onto bigger and better things. Securing a winning season or clinching a championship is typically complemented by things like contract extensions, salary increases and sometimes flashy rings.

But as Isaac Newton said in his third law, “for every action there is an equal and opposite reaction.” And, as I said before, for every winner there’s also a loser. But no one wants to be a loser.

Throughout my athletic career, I hated losing. As a sports journalist, I’ve interviewed my fair share of somber coaches and athletes following devastating losses. And, needless to say, they’re not always the most eager to talk about what they did wrong or how their team fell short. In fact, I’d assume most athletes hate losing whether that be at the high school, college or professional levels. Whoever you are, I’m sure you hate losing, too.

Losing is a form of rejection, and for some people, it’s equivalent to being told you’re inferior – kind of like being told “no.”

However, sports have long since provided humans with a platform to combat rejection and the word, “no.” It’s exciting to root for the underdog, and even more thrilling to be the underdog. Take Illinois football, for example. There was something absolutely enchanting, practically magical, about watching the Illini knock off the No. 6-ranked Wisconsin Badgers, 24-23, in October. Before kickoff, I’m sure the Illini were grazed with considerable doubt in their ability to beat the Badgers, yet during the game, Illinois undoubtedly had to drown out the word “no” and create its own destiny.

Phrases like “unfinished business” and “comeback season” fuel part of our rebellious attitudes toward the word “no.” We’re fascinated by resilience and athletes’ abilities to silence nay-sayers. In sports, “no” acts as an invitation to prove people wrong, to rebel and to go against the odds.

The story about Michael Jordan being “cut” from his high school varsity team caught my attention a few years ago. There’s something captivating about one of the greatest basketball players of all time being subpar in high school. The contrast between Jordan’s NBA and high school career perfectly exemplifies our aversion to “no.”

While Jordan’s high school coach, Clifton “Pop” Herring, did actually cut him from the varsity squad and strategically place the NBA great on the junior varsity roster to get more court time, it’s almost more gratifying to believe Jordan rose from the ashes of an inferior high school career to become the basketball titan we’re better acquainted with.

“No” typically welcomes resurgence and rebellion, especially in sports. But not right now.

A few weeks ago the sports world was stunned by the firmest “no” it has ever seen. And, as a sports journalist and fan, that “no” was incredibly hard to digest. But the suspension of nearly all organized athletics in lieu of concerns over the COVID-19 pandemic was bigger than a two-letter word.

This time, being told, “No, you cannot compete” isn’t an invitation to prove pessimists wrong. Athletes, fans, coaches and administrators alike need to listen to this “no.” While a world without sports is dismal and frustrating, it’s a sacrifice essential to the health and safety of our global community.

I know it’s hard to adjust our perception of “no.” For athletes, coaches and everyone in between, it’s going to be challenging, but it’s important.

Sports will return, and when they do we’ll be able to use “no” as a springboard for mastering our own destinies again. But for now, it’s a word we all need to heed. Governing bodies like the NCAA and the International Olympic Committee might seem like they’re quick to dish out these “no’s,” but decisions to suspend or cancel competitions isn’t a malicious action, it’s to protect the health and safety of all parties involved.

For once in the realm of sports, this is a positive “no,” and one we all need to take seriously.