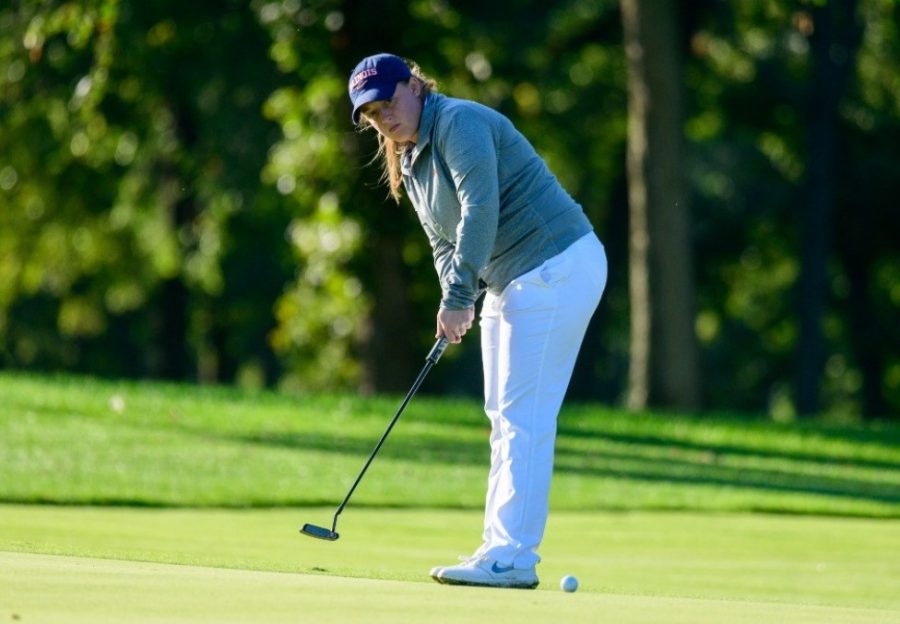 Senior Tristyn Nowlin putts her ball onto the green during the Illini Women’s Invitational on Oct 7, 2019 at the Medinah County Club.

While heads are still spinning due to the outbreak of COVID-19, wondering when certain sports will return, one thing that is unfortunately known for sure is that the Illini women’s golf team’s season is over. After a successful fall season, the team had high hopes for a busy spring schedule. After only three invites though, the virus hit, and the season came to an immediate end.

In their three invites this spring, the Illini did not perform well. They finished in the bottom half of the field in their first two invites but tied for fifth in the third and final competition. The Illini were just starting to meet the expectations of those in the program. Based on the performance in the fall and spring seasons, let’s take a look at some of the team’s best performers.

MVP and Senior who will be missed: Tristyn Nowlin

The stand-out performance of the season for senior Tristyn Nowlin was during her second invite of the fall. At The Schooner Fall Classic in Oklahoma, Nowlin shot three-under-par and tied for first individually, the only first-place finish by an Illini all year. Nowlin was the team’s top golfer in five of seven invites this season. However, she only completed six of the seven invites as she got injured in the Westbrook Invitational on Feb. 24. Nowlin, a three year all-Big Ten golfer, was well on her way to a fourth all-Big Ten season before the virus hit and cut the year short.

“There are times when you’re sitting at home, self quarantining, when you’re hit with the realization that it’s over,” Nowlin said. “As a senior, you do have this plan and expectation to compete and prepare yourself for that next step.”

The Richmond, Kentucky, native does plan to golf professionally after college, but it is unclear whether that will be this year or next year. The NCAA plans to grant seniors of spring sports an extra year of eligibility; however, without concrete information, Nowlin has yet to make a decision on the matter. No matter when her time is up at Illinois, she will be deeply missed.

It’s not only her performance on the course that makes her such an important part of the team but her performance as a leader as well. Nowlin was the team’s unofficial captain this season, and each of her teammates looked up to her. It is rare to get a golfer with the talent and leadership that Nowlin contains, which is why this team will undoubtedly miss her presence in multiple ways and why she is the team’s MVP.

Sophomore Kornkamol Sukaree was the highest overall performer for the Illini this year after Nowlin. She was the team’s top finisher once and the second finisher three times. Despite a little inconsistency, Sukaree has shown loads of potential and has proven how talented she is in many invites. Coming to the United States from Thailand for high school before joining the Illini, Sukaree earned all types of success, including winning her final junior tournament before her time with the Illini. In her freshman year at the college level, Sukaree earned All-Big Ten First Team honors. Sukaree would have been in the conversation for all-Big Ten honors again had the season not ended months early. The Illini will need a leader on the golf course next year, and Sukaree can be the athlete to fill that role, which is why she is their underclassman to watch.