Illini of the season: Shegos, Salafatinos lead Illini next year 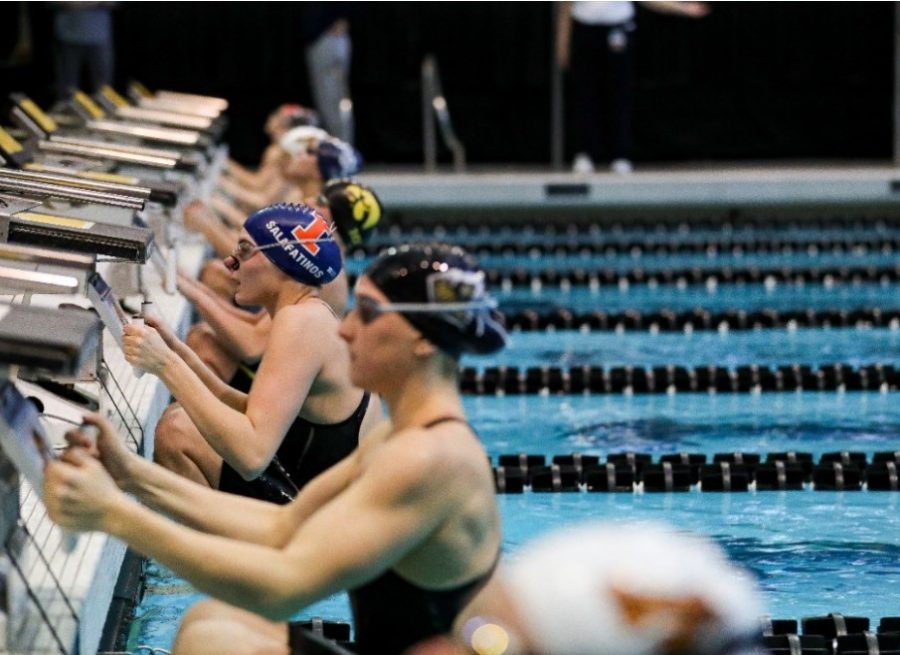 Freshman Athena Salafatinos waits on the block to start a backstroke race at The Swim and Dive Big Ten Championship on Feb. 26.

The Illinois swim and dive team finished their almost-complete season with a 4-6-1 record, including a 3-0 record at home. The Illini had 11 swimmers advance to the CSCAA National Invitational Championship and two divers advance to the NCAA Zone C Diving Championship, but both events were cut short. Despite an up-and-down season, three Illini showcased their individual talents this year.

As only a sophomore, and in this season alone, Taylor Shegos has accomplished many feats. In September, she broke a record on the 1-meter board en route to a 299.47 performance in the first competitive meet of the season against Indiana State. The score beat the previous holder Britni Fisher from 2012.

In October, she was awarded Big Ten Diver of the Week due to performances against Illinois State, Southern Illinois and Michigan State, an award an Illini diver had not earned since 2009.

Then, in the Big Ten Championships, she became the first Illini in history to earn the No. 1 seed in the preliminaries of the 1-meter dive. Overall, Shegos had a solid season, especially in the first few months, earning many first or high-place finishes in her dives.

Already qualifying for the NCAA Zone C Championship two years in a row in both the 1-meter and 3-meter dive, she shows promise. With two more years left at Illinois, she has the potential to improve scores, earn records and follow in alumna Ling Kuhn’s footsteps at the NCAA Championships.

Senior to be missed: Kristin Anderson

This season was a strong one for senior Kristin Anderson. Anderson topped off her last season an Illini with many first and high-place finishes.

At the beginning of the season against Indiana State, Anderson earned four out of four first-place finishes. Two of her individual events were the 200 and 100-yard freestyle while the other two were relays.

In a tri-meet against Illinois State and Southern Illinois University, Anderson earned first-place finishes in all her events, both individual and relay.

In Indiana, at the House of Champions Invitational, Anderson swam a personal-best in the 100 freestyle with a time of 49.90.

On the first day of the Big Ten Championships, Anderson earned herself a place in Illinois history as the fourth fastest 50 freestyle swim for her split time of 22.74 in the 200 freestyle relay.

The third day saw her secure the fourth fastest 50 freestyle time with 23.08 in the 200 medley relay.

As a vital freestyle sprinter for the team, it will be interesting to see how head coach Sue Novitsky plans to fill that spot next season. It could potentially be rising junior Abby Cabush, as she has been a part of freestyle relays with Anderson.

As a freshman, Athena Salafatinos has shown that she is versatile in the water. Swimming backstroke, butterfly and racing in relays has given her a chance to earn personal and lifetime bests as well as get into the top 10 times in Illini history.

Within the first two months of the season, Salafatinos earned a first-place finish against Indiana State in the 200 backstroke and a lifetime best in the Michigan State meet.

At the House of Champions Invitational in November 2019, she earned the No. 3 spot as the fastest Illini in history to swim the 100 backstroke.

During the Big Ten Championships, she earned spots in the record book with the seventh fastest 200 relay time, a personal and lifetime best.

After one season down, Salafatinos is already showing potential with Novitsky saying that she can qualify for NCAAs and national USA swim meets.