Illini of the season: Bright spots from a tough year 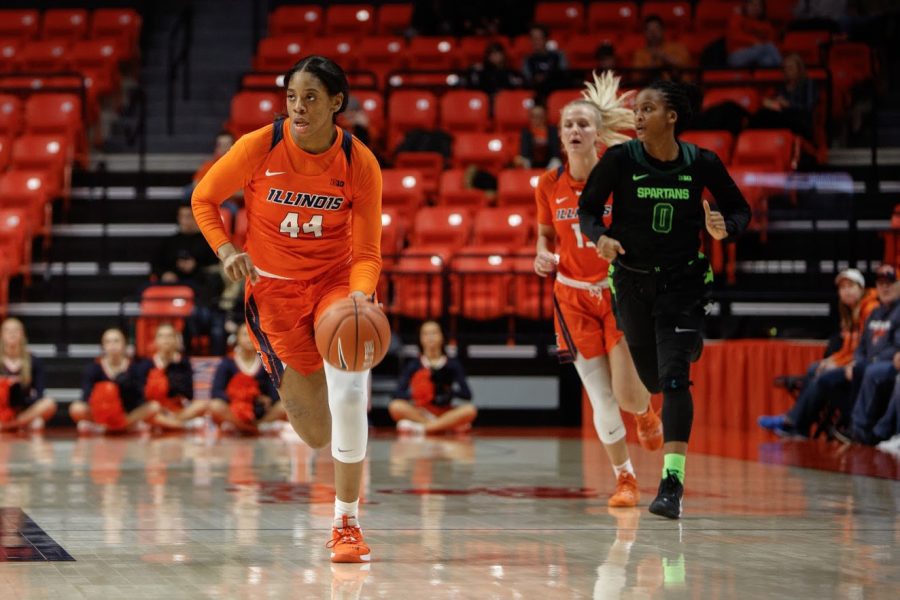 Freshman Forward Kennedi Myles advances down the court during the game against Michigan State on Feb. 26. The Illini begin their 2020-2021 season Wednesday night against Indiana State.

The Illinois women’s basketball team once again struggled. For the seventh straight year, the Illini failed to reach .500 on the season, and Illinois won just two games in conference play. With that said, the Illini had some great individual performances this season.

With Petra Holešínská’s 12.6 points per game and 41% shooting from three, the redshirt-junior guard led Illinois in both those categories. In the Big Ten, Holešínská ranked 19th in scoring and fourth in three-point shooting. For a team that shot just 34.3% from three on the season, Holešínská was essential for the Illini to spread the floor and find open shots inside.

While her statistics did fall in conference play, Holešínská was an essential part of the Illini’s two Big Ten wins. On Jan. 12, Illinois faced Minnesota where Holešínská dominated with 28 points on 9-15 shooting from the field and 3-5 shooting from deep. In the fourth quarter, with the Illini trying to maintain their lead, Holešínská helped stave off a Minnesota comeback by making six important free throws to give Illinois their first conference win.

In a Feb. 9 matchup against Penn State, Holešínská once again proved to be a high volume and efficient scorer, scoring 28 points on 9-16 shooting from the field and 4-7 shooting from three. The fourth quarter turned into a back-and-forth affair, but with just under four minutes left to play, the Illini trailed by five points. Down the stretch, Holešínská took over, scoring eight of Illinois last 13 points including a three with 1:22 left in the game to give Illinois a two-point lead as well as two free throws to put the game away.

Senior who will be missed: Ali Andrews

Senior forward Ali Andrews ranked second in scoring, second in blocks and third in rebounding for the Illini. For a team that struggled against size, Andrews was a key piece to Illinois’ frontcourt, defending and scoring inside.  Her 48.4% shooting from inside the arc was well above the team’s mark of 38%.

Andrews was also important to Illinois’ attack from the perimeter. On the season, Andrews ranked 2nd in both three-pointers made, 42, and three-point percentage, 39.3%.

Andrews’ versatile skill set was on display in a Nov. 9 matchup against Holy Cross. In a thrilling overtime win, Andrews registered a double-double with 20 points and 11 rebounds while making eight of her 17 field goal attempts including four three-pointers.

With the graduation of Andrews, Illinois will be losing a player with a wide range of skills on the court.

Head coach Nancy Fahey looks like she might have found a gem in freshman forward Kennedi Myles.  In her inaugural season, Myles played the most minutes for Illinois, led the team in blocks, rebounds and steals while ranking third on the team in scoring.  Not only were her numbers some of the best on the team, but they were also some of the best in the Big Ten. Myles was tied for third in the Big Ten in rebounding and tied for fourth in the Big Ten in steals. Myles also led the Illini with eight double-doubles on the season, setting the Illinois freshman record.

Myles showed her skill set in a close victory over Merrimack on Dec. 10. With the Illini struggling to make anything from the three-point line, Myles asserted herself inside, scoring 23 points on 11-20 shooting, all inside the arc. She grabbed 12 rebounds and added a steal and block. Myles also led the team in both scoring and rebounding on the night while not turning the ball over.

As Myles prepares for the upcoming season, it looks as though she is ready to build off her first year.

“At the end of the day, we can’t determine wins and losses, but we can determine how hard we work and how hard we play and our focus that we have in and out every day,” Myles said.