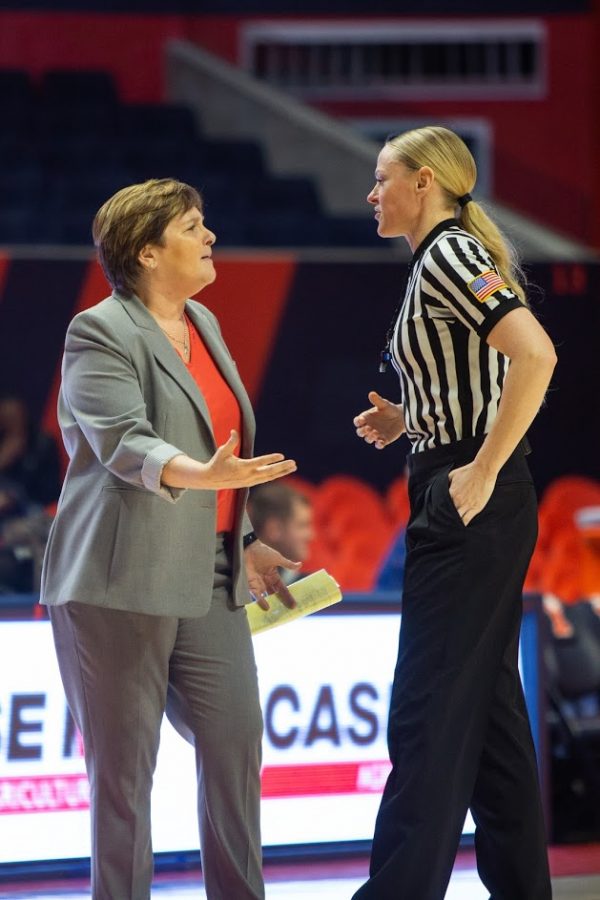 Illinois Women’s Head Basketball Coach Nancy Fahey speaks with a referee during the match against Ohio State on Feb. 6 at State Farm Center.

Illinois women’s basketball head coach Nancy Fahey’s contract was extended Friday, pending approval from the UI Board of Trustees, according to a press release sent out by Fighting Illini Athletics. The contract goes through 2025.

Fahey came to Illinois from Washington University in St. Louis in 2017. In her time at Illinois, the team has improved from where they were, with last season’s 11-19 record being the best record for an Illini team since 2014-2015.

In former head coach Matt Bollant’s final season in Champaign in 2017, the Illini finished with a 9-22 record.

Each of Fahey’s teams have improved by one additional win per season. Fahey’s first Illini team finished with an identical record and the team went winless in the Big Ten, but the team has slowly improved each season.

Last season, the Illini finished 11-19, which is the best record the team has had in five years. Athletic director Josh Whitman was eager to give Fahey the extension.

“I have great confidence in Nancy’s leadership and look forward to her advancing our women’s basketball program for many years,” Whitman said, per fightingillini.com. “Although the wins have not come on the court as quickly as any of us, especially Nancy, would like, I see the internal growth occurring within the program. The culture and work ethic have improved dramatically, as has our talent. Nancy and her staff have worked tirelessly in the gym and on the recruiting trail, and we have a talented, motivated core group of players returning for us next season, complemented by an impressive set of newcomers.”

The Illini will return key players next season in sophomore forward Mackenzie Blazek and freshman forward Kennedi Myles. Myles was third in scoring on the team this year and led the team in rebounding.

Fahey is ready to continue building up the program after the extension.

“I appreciate the confidence Josh Whitman, Chancellor Robert Jones, President Timothy Killeen and the Board of Trustees have given to me, our coaching staff and the team. I intend to do everything possible to bring this program back to the top of the Big Ten,” Fahey said in the press release.