Illini of the season: Team shows promise for future despite shortened season 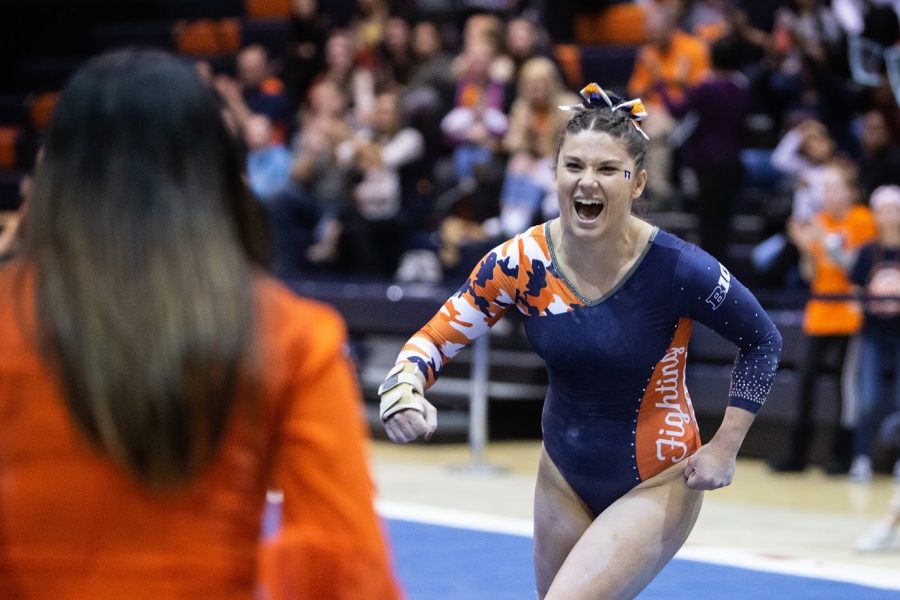 The Illinois women’s gymnastics team climbed as high as sixth in the nation to open the season before falling to No. 24 before the season was prematurely canceled due to the COVID-19 pandemic, leaving plenty of unanswered questions.

What if freshman star Mia Takekawa had been able to make her debut at nationals after breaking records during the regular season? How would the addition of two new assistant coaches affect the team’s performance in the postseason? What if senior Karen Howell could’ve made one final appearance at the NCAA Nationals?

While we are unable to obtain adequate answers to those looming queries, we must reflect on the shortened season as we discuss three standout performers for the Illini this year.

Few can argue that freshman Mia Takekawa’s debut season was anything short of historical, even before the season’s cancellation came to light. Takekawa made her collegiate debut on Jan. 4 against Missouri, earning three titles in all-around (39.350), bars (9.825) and beam (9.900), before being named Big Ten Freshman of the Week and Big Ten Gymnast of the Week for back-to-back weeks, the first time this has happened in program history.

Takekawa also recorded the program’s first-ever 10.000 on beam in a tri-meet against Lindenwood and Temple on Jan. 9, breaking the record (9.925) previously set by sophomore Shaylah Scott last year.

The freshman truly personified the idea of an “all-around” performer, as she won eight total titles across twelve meets, including four on bars, two on beam and two all-around.

Takekawa shows lots of promise, as she is only a freshman, and can give Illinois a shot at taking down Michigan, who has won 18 of the last 21 Big Ten titles.

Senior who will be missed (maybe?): Karen Howell

Howell represents everything coaches want in an athlete: she’s technically gifted, hard-working, comes into every meet and practice with a focused and determined mindset and wants to help everyone else on the team succeed. Losing Howell will be a huge blow for the program, as her leadership will be difficult to replace next season and beyond.

Accumulating 17 titles across her four years, including five in her senior season, Howell was named to the All-Big Ten Second Team and recognized with the team’s Hardest Worker award last season. She also held five program records at the start of the season.

While she an additional year of eligibility was a possibility, the NCAA voted to not give winter sports the extra year. Either way, another season wasn’t really in the cards for Howell.

“My career plans don’t necessarily match up with doing another year of gymnastics,” Howell said in a teleconference on March 26. “But I feel so robbed this year, and I want to be able to end my senior year on my terms.”

Takekawa isn’t the only underclassman who dominated this season, as sophomore Shaylah Scott continued right where she left off last year, earning four titles, one on vault, one on beam and two on floor. Despite only being a sophomore, Scott has already earned seven career titles, and the Plano, Tex., native also tied for sixth on beam last year at the Big Ten Championships.

Scott paved her way into the record books last season, setting two school records before even starting her sophomore season. With two seasons already under her belt, head coach Nadalie Walsh will need to take full advantage of Scott’s postseason experience and leadership as she must replace Howell next season and beyond.

While Scott may have received the nomination for this award, it is necessary to note that the future for the Illini is bright, as Scott and Takekawa are joined by freshmen Olivia O’Donnell, Arayah Simons and Mia Townes, all of whom have won titles in their first year in the program.