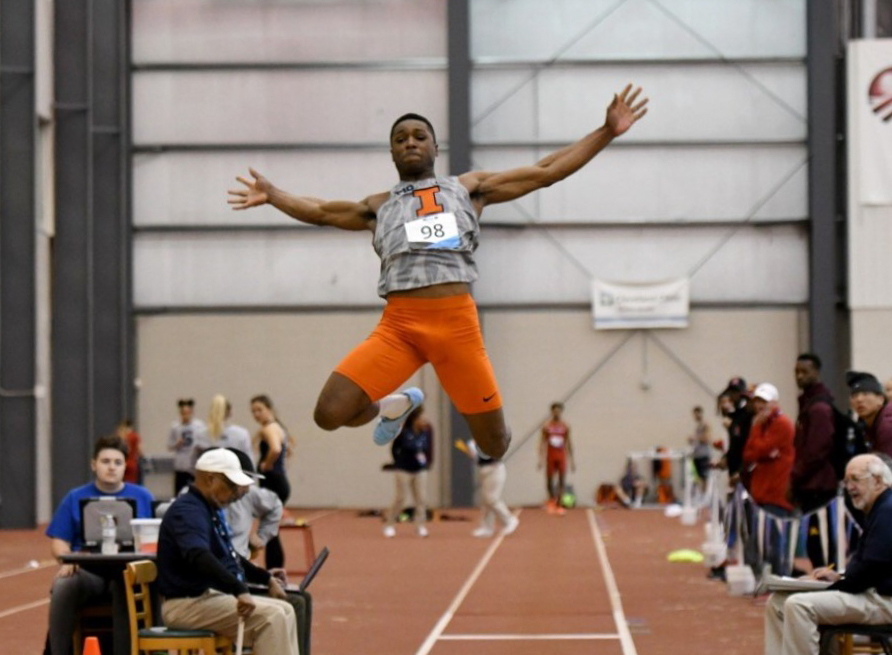 Senior Jonathan Wells competes in the long jump event during the Big Ten Men’s Track and Field Championship on Feb. 29.

MVP and Senior who will be missed: Jonathan Wells

Redshirt senior Jonathan Wells has accomplished quite a lot for the Illinois men’s track and field team. The Fox Lake native is a six-time All-American who has excelled in the high jump, long jump and heptathlon events. Wells has won three Big Ten titles and became the first Illini to win both long jump and high jump titles in their career with his most recent long jump title coming at the 2020 Big Ten Indoor Championships.
Wells led Illinois with numerous event titles in meets this season, including the team’s home meet at the Armory. He also had two consecutive meets, the Frank Sevigne Husker Invitational and the Music City Challenge, where he placed first in the high jump and long jump.
The track star, who has overcome back issues and has his eyes set on a chance to compete at the Olympic Trials, had a glass-half-full mentality regarding the canceled season, despite the fact it was going to be his last act.
“Yes, we had those expectations that we expected to have an opportunity to go after, but we know in life that every day isn’t guaranteed,” Wells said. “Even though this is a disappointment, I’m still here with a lot of blessings and things to be grateful for.”
All the accolades Wells has collected made it impossible not to name him as the team’s MVP this season. His humble attitude and dominant performances have also made him the senior that will be missed the most.
Underclassman to watch: Declan Rustay
The Hoffman Estates native had strong performances in his sophomore season and helped the team steadily improve throughout the course of the season, excelling as the anchor leg on the 4×400 meter relay team. Starting at the Illini Invitational, the 4×400 relay team claimed the event title in first place with a time of 3:18.45. Individually, Rustay also placed first in the 60-meter dash with a time of 6.80 seconds and in the 200-meter dash with a time of 21.95 seconds, both at the same meet.
The 4×400 meter relay team timed their season-best finish, 3:10.62, at the 2020 Big Ten Indoor Championships. Rustay’s relay team placed fifth and scored four points for Illinois.
Even in his first season on the team as a freshman, Rustay competed at the Big Ten Championships for the indoor and outdoor seasons, managing to earn Second Team All-American honors for his 4×100 meter performance, where his relay finished with the fourth-fastest time in program history, 39.01.

With very successful times on the 4×400 teams, Rustay has showed progress, which makes him one for fans to watch. Rustay and his underclassmen 4×400-meter running mates have all showed potential to make another splash in the Big Ten conference next year.