Illini of the season: Carter, McCool shine among talented roster 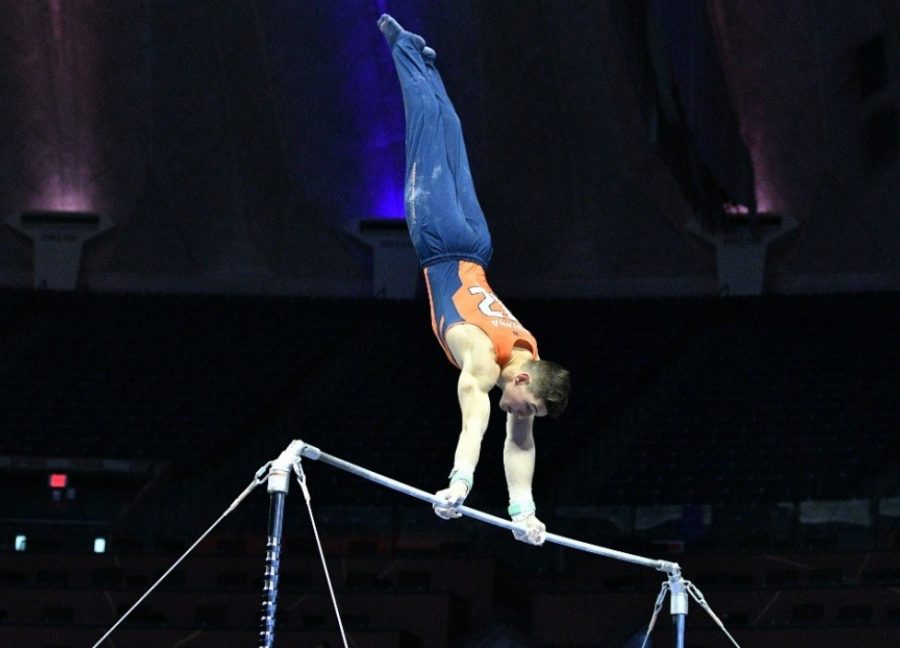 Senior Sebastian Quiana competes in the high bar event during the NCAA qualifiers on April 19, 2019.

The Illinois men’s gymnastics team had only two regular-season competitions left in its 2020 season and was starting to look forward to the postseason. The team had accumulated an 8-3-1 record, including a perfect 5-0-0 record at Huff Hall, and notched wins over ranked Big Ten foes Michigan, Nebraska and Penn State. But while the team was in Puerto Rico preparing for a competition there, the season was abruptly cut short due to the COVID-19 pandemic.

It was a team effort that got the Illini to where they ended their season, with a talented roster that included five All-Americans. However, three Illini gymnasts stood out as the team’s MVP, a senior to be missed and an underclassman to watch next season.

If there’s one word to describe Hamish Carter’s 2020 season, it would be grueling. The sophomore from West Midlands, U.K., competed as an all-around gymnast for the first time this season, competing on all six apparatuses in four of Illinois’ seven meets. Competing as an all-around gymnast in just one meet can be a grueling task, but Carter was attempting to do that in every meet unless injury prevented him from doing so.

“I definitely noticed that it was much more effort to prepare for all six events every weekend consistently,” Carter said. “It was challenging, but being an all-around competitor is my favorite thing to do in the gymnastics world. (The effort) is just something that comes with that.”

All part of his all-around training, Carter would practice in the gym Monday to Friday, practicing on three or four apparatuses per day. In a teleconference on Mar. 26, head coach Justin Spring described Carter as the “workhorse for our program,” both in practice and competition. The extra work and effort Carter put into his training and his routines paid off handsomely in competition.

Carter won seven event titles this season, more than any of his teammates. Of the four meets in which Carter competed as an all-around gymnast, he won the all-around title in three of them. He had a standout performance against UIC on Jan. 11 to start the season, winning titles in all-around (82.200), pommel horse (13.150) and high bar (14.050). Carter was named Big Ten Gymnast of the Week twice this season and is a finalist for the College Gymnastics Association MVP of the Year.

“Hamish was our backbone this year in a lot of ways,” Spring said during his teleconference. “(He’s) really a big reason why we beat opponents that I didn’t think we were going to beat. (I’m) really impressed with how he was able to handle a pretty grueling two months.”

Senior to be missed: Sebastian Quiana

Sebastian Quiana was a consistent presence in competition for the Illini this season. The Oradell, N.J., native competed in all seven of Illinois’ competitions on the same four apparatuses every time: floor exercise, vault, parallel bars and high bar. Entering the season, Quiana hoped to end his career at the NCAA National Championships with a floor exercise championship and a top-three finish on parallel bars.

“I was really able to become consistent on all the events I competed in,” Quiana said. “That led me to believe that I could’ve completed my goals for myself that I set this season.”

A memorable highlight for Quiana this season was performing what would turn out to be the final routine of his career, as well as the final routine of Illinois’ 2020 season. Facing Michigan and Penn State for Senior Day on Mar. 7, it was left to Quiana to score at least 11.750 on high bar to secure the win for Illinois. Quiana nailed his performance and stuck the landing for a score of 13.550.

“I like how much I grew as an athlete over my four years,” Quiana said as he reflected upon his career. “I didn’t know how far I would be able to get in gymnastics. Going to the University of Illinois let me grow and reach my full potential as an athlete.”

Quiana plans to study for the Medical College Admission Test (MCAT) in the near future in the hopes of entering medical school to pursue a career as a surgeon.

Freshman Connor McCool had a very successful season to start his collegiate career. The Wildwood, Mo., native competed in all seven meets of Illinois’ season, one of three Illini freshmen to do so. Competing exclusively on floor exercise and vault, McCool isn’t as versatile as some of his freshmen teammates are, but his success on floor exercise this season is what sets him apart and makes him someone to watch next season.

With only one exception, McCool placed first or second on floor exercise every time with scores of 14.150 or higher. McCool made his collegiate debut on Jan. 11 against UIC, during which he earned a floor exercise title with a score of 14.300; he was named Big Ten Freshman of the Week three days later. McCool would earn two more floor exercise titles later in the season. When the season ended, McCool’s highest floor exercise score was 14.800, and he was ranked No. 3 in the nation on floor exercise by the CGA, which earned him regular-season All-American honors. McCool is also a finalist for the CGA Rookie of the Year.

“I didn’t expect any of the results that I got; it’s pretty crazy,” McCool said, referring to his preseason expectations. “My goal as a gymnast coming into collegiate gymnastics was to (be an) All-American, but I didn’t expect it to happen freshman year at all.”

Next season, McCool wants to debut a new vault routine he was unable to perform this season, which he hopes will increase his vault ranking. He also wants to improve his floor routine to become even more of a contender for a Big Ten and national championship.