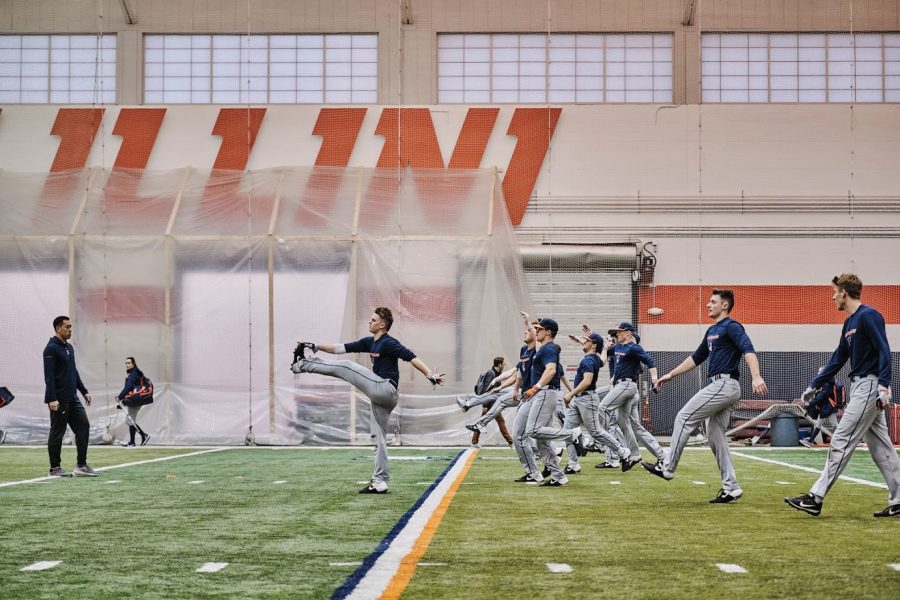 Members of the Fighting Illini Baseball Team complete warmups before practice on Feb. 10, 2019

With baseball still on hold until further notice, two game-changing decisions have been made over the past two weeks that will have long-lasting effects on the game for years to come.

The first decision came on March 30, when the NCAA Division I Council, mostly made up of athletic directors, decided to grant all spring sport athletes an extra year of eligibility after their seasons were prematurely shut down by the spread of COVID-19.  The good news is that seniors who were on track to graduate and finish their college playing careers will now be able to come back for another year if they choose to do so. The situation for a return will vary case-by-case, but most seniors will either use the time to finish their undergraduate careers or enroll in a one-year masters program; the latter option could potentially allow seniors to not only finish all the schooling they will ever want or need but also keep a professional career on the table after the 2020-2021 season.

Some Illinois seniors on the baseball team will be doing just that, according to head coach Dan Hartleb.

“On Wednesday I did get to talk with the seniors,” Hartleb said.  “I listened to what they had to say and gave them some opinions.  I do think we will have a few seniors that will come back; it won’t be the entire group. We do have a couple guys with job opportunities and will likely move on.”

Which seniors will return for the Illini and which will move on remains to be seen, but the ruling also made any returning seniors not count toward the caps of 35 men on the roster and 27 players on scholarship. As for how much financial aid those returning seniors get, the NCAA left it up to universities to decide for each player.

While college athletes will be able to replay the season that was unceremoniously snatched away from them, the decision comes with its drawbacks. Universities will deal with logistical and monetary challenges for the foreseeable future. According to USA Today, seniors returning to cash in their extra year could cost universities like Illinois anywhere from $500,000-$900,000, while the budget will already be strained without the revenue from spring and winter championships.

The NCAA will only be giving schools $225 million to fund athletic programs, as opposed to the $600 million given last year. Although eligibility is restored, baseball teams will also have to get their rosters below 35 men following the 2021 season, which will likely force Hartleb and other coaches to make some unpleasant personnel decisions in the future. Hartleb said he regrettably anticipates those conversations happening.

Another factor that will impact college players and the game of baseball brings us to the second decision. On March 26, the MLB and MLB Player’s Association came to an agreement in the event of the entire season being canceled. One aspect of this agreement allows the MLB to shrink the first-year player draft from the normal 40 rounds to a minuscule 5-10 rounds. In a five-round scenario, over a thousand amateur players who were expecting to get drafted this year will have to return to the drawing board and weigh their options.

“A more compact draft will create less opportunities for guys, and some guys that could’ve been drafted in the past might be back for their senior year,” Hartleb said. “The next five years will be cloudy from a roster standpoint.”

A shortened draft means that junior college players, aside from the very top of the group, will no longer be pursuing professional baseball as quickly as they thought and possibly not at all, as the deal also allows the 2021 draft to be as low as 20 rounds. Those juniors and back-of-the-pack seniors typically were taken in later rounds because there are more risks involved in signing that type of player.  Now those guys will either go back to school, sign as a non-drafted free agent or choose a different path. Non-drafted free agents who face a different conundrum can only receive a maximum signing bonus of $20,000, a deal-breaker for some players who may need more than that to pursue and finance themselves or their families.

These decisions come in the wake of a professional baseball agreement that expires in September where the MLB has been trying to reduce the amount of minor league teams from 160 to 120 since negotiations began in December. Minor League Baseball already had little negotiating power, and now the coronavirus will allow Major League Baseball to use the massive loss of revenue that came with the virus to force MiLB’s hand. With the ability to shorten the next two drafts already, there won’t be enough new players to man the teams anyway, effectively giving the MLB all the power to do what they want.

You might be asking yourself why the MLBPA didn’t do anything to stop this.  The answer to that is because MLBPA’s job is to look out for the interest of players who are already on the 40-man rosters of MLB teams. The main thing they wanted out of this agreement was the assurance of service time for players in the case there is no season, which they received along with $170 million for the months of April and May. As of now, minor leaguers are receiving $400 a week through May 31.  There is currently no plan in place for payment after that date.

Essentially, what is happening is that Minor League Baseball and amateur players in college and high school are seeing a lot of their pathways to a professional baseball career being diminished because the interests of the MLB and MLBPA do not align with future players in a sport that is already incredibly hard to reach the major league level. But those players in college, in high school and in the Minor Leagues are the future stars of the game. It would make sense for the MLB and owners to look out for their future money makers but that has not been the case. Even after Major League Baseball raked in a record $10.3 billion in 2018 and has seen their revenue steadily increase for the past 20 years according to Forbes, cutbacks have continued to be made at the expense of minor league and amateur players.

Will there ever be someone to represent future major leaguers at baseball agreements? Coach Hartleb does not think so.

“I don’t think there ever will be,” Hartleb said when asked if amateurs and minor leaguers will be represented in the future. “It is a business, and owners have risk involved. There’s certain things that they want to do, and they have the power to dictate those things. They’re paying higher salaries to the guys that are in the big leagues, so they’re looking throughout their organizations and systems to find ways to save money. I think this is something that will be dictated, and they will not have a say in the outcome. Again, it’s just a business type decision.”

What is certain during the latest agreement is the MLBPA got their service time, the MLB cut costs and it was all done while the metaphorical neck of players yet to make it to “The Show” was squeezed a little more.