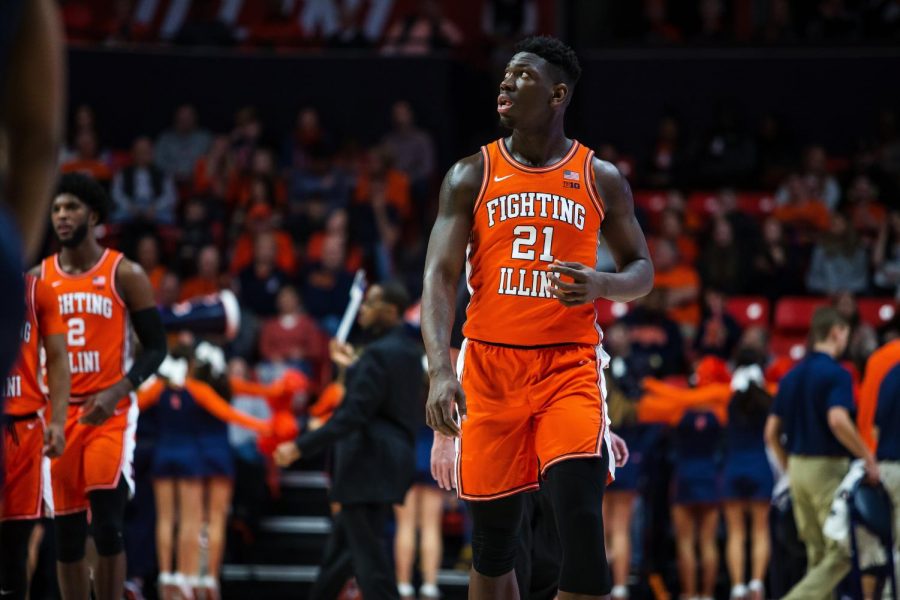 Freshman Kofi Cockburn walks onto the court during Illinois’ game against Old Dominion on Dec. 14, 2019. The Illini won the game 69-55.

On Tuesday afternoon Illini center Kofi Cockburn announced on his Instagram that he is to forgo his final three years of college eligibility and declaring for the NBA Draft. Cockburn averaged 13.8 points and 8.8 rebounds a game en route to winning Big Ten Freshman of the Year. In Big Ten games, Cockburn posted 11.7 points, 8.2 rebounds while shooting just under 50% from the field. I caught up with Sam Vecenie who covers the NBA Draft for The Athletic to ask him about where Cockburn ranks as a prospect after his freshman season.

The Daily Illini: In terms of Kofi’s NBA potential now as a freshman where is it at?

Sam Vecenie: I think Kofi is in a more difficult position. I don’t currently have him ranked in my top 100 prospects. I would say he is somewhere between 101 and 115, something like that. His game is not just particularly translatable to the direction that the NBA is going right now. It is kind of hard to pinpoint what he does, at this specific juncture, that is NBA level. He certainly has that ceiling and potential, because anytime you are 6-foot-11 have a 7-foot-5 wingspan, you are certainly in the mix. Currently, I don’t think his skill level is up to par yet.

DI: What would Kofi need to prove in the next couple of months?

Vecenie: I’m not sure he is going to have the opportunity to prove what he needs to in the next couple of months. The big thing he needs to keep improving is his hands, he needs to keep improving his footwork, he needs to guard on the perimeter at a much higher level, he needs to be a much better rim protector inside, to be honest.  For his skill set to translate at the next level, he needs to be a darn near-elite level rim protector, in my opinion. That isn’t where he is at currently, he is good. But, he is not at the level he needs to be. Certainly, anything he could do as a jump shooter I think would help. I am pretty dubious on him being anything of a jump shooter going forward. Finally, the big thing he doesn’t do well is diagnose the play. His feel for the game on offense is lacking in a substantial way. He has an under one to three assist to turnover rate, he isn’t a guy who makes super high level reads regularly. He is just very large and can establish a position exceedingly well at the college level.  Additionally, he is capable of gathering his misses on the offensive glass. That is a valuable skill set, but how much does that translate to the next level? I think I have some pretty real questions.

DI: Are a lot of the questions around his game right now are because of how raw of a player he is?

Vecenie: Yeah, I think that is right. I think the question with a lot of these big men is, what is the upside? What are you getting out of someone like Kofi Cockburn by drafting him? Are we sure he is a starting center down the road? I don’t think we have anything resembling that. Does he have that ceiling? I don’t know, his skillset is really far away from being a guy that could impact the NBA game at an exceedingly high level. He is really strong and can establish a position, but a lot of centers can do that at the next level. So, I just worry at, given how raw the skillset is and the feel for the game is that the physical tools won’t be able to overshadow that at the next level.

Vecenie: I’m not going to project what his decision is actually going to be. I think that is up to him. If he doesn’t want to be in college anymore, more power to him. I think he has a reasonable shot at being a two-way guy next year, but if I was advising him, I think his ceiling is much better by returning to school next year.

DI: The biggest area for him to improve on is his overall skill set and basketball IQ, right?

Vecenie: I think he needs to get better positionally, at defending away from the basket and needs to be a bit better at defending near the basket. Like I said, he isn’t a bad defender at the basket. He is certainly very effective at the college level due to his size. But, there are a lot of areas around there, rotationally, and in terms of his overall impact, in terms of timing, that I think he needs to continue improving on.