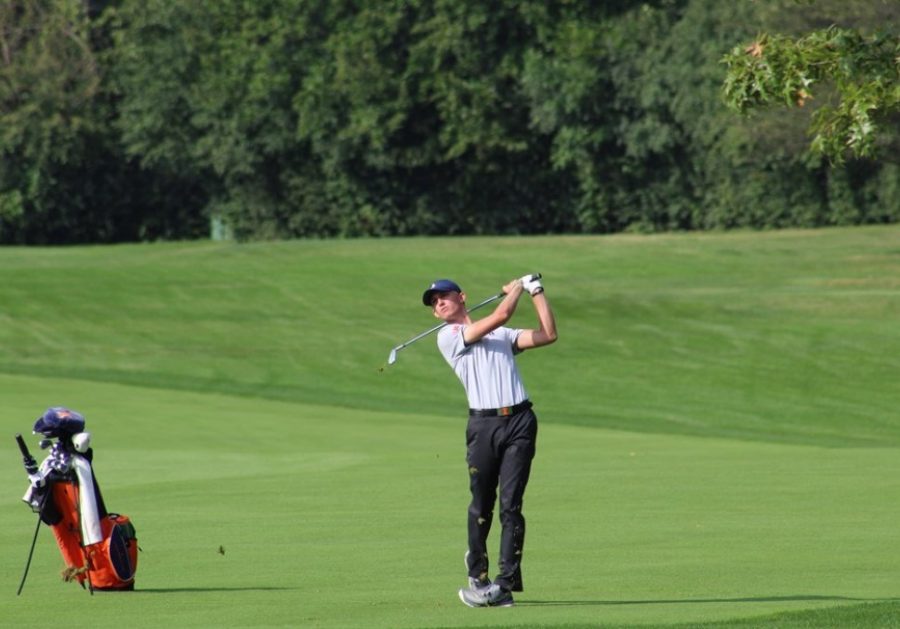 Junior Michael Feagles watches his ball soar through the air after following through on a swing during the OFCC/Fighting Illini Invitational on Sept. 16, 2016.

The NCAA gave spring athletes the option of using an extra year of eligibility due to the COVID-19 pandemic, which caused athletic departments to cancel the spring season.

Feagles took advantage of the opportunity and will be back for his fifth season as a part of the team. He announced his return Monday via Twitter.

“I had to think about myself … what’s best for me,” Feagles said. “It came down to … what the future of pro golf looks like right now. With everything going on, I don’t know when everything’s going to start back up. And I don’t know how the tour is going to handle things … there’s just a lot of what ifs and unknowns; and I did know that coming back to school and being with coach for another year and having those facilities that we have and being around a bunch of guys that are competing at a high level, all those things are going to help me and make me better. It came down to that and …  I want to win with Illinois again … I’ve got just a lot of things I still want to do in Champaign.”

Family can always be a big help when it comes to deciding your future. Feagles turned to his family when contemplating whether to return or not.

He credited his dad with always being there for him and helping guide him through this tough time.

“My dad has always been a big part of decisions I’ve made,” Feagles said. “I’ve never excluded him from that. I’ve always asked for his opinion and his guidance. We just sat down and made a big, long list of the benefits of coming back, the downsides of coming back. And it just seemed like the pros just outweighed the cons for sure. It’s great being home with my family, and if I turned professional, I’d be living in Arizona and around them all the time. I love that part of it. But … we all thought collectively that going back was definitely the right move.”

One of the non-golf reasons for him to come back to Illinois was to complete a three-semester master’s program.

Even though the course load will be less, which could help his focus next season, Feagles believes regardless of the time he has, it’s still all about the way you prepare and compete each day. He also thought about how much more prepared he could be for the pros if he came back for another year.

“That was definitely something I considered, me and coach have talked about it,” Feagles said. “Every year at Illinois, I’ve gotten consistently a little bit better … I think that I’ll keep getting better and next year that’ll be the same storyline … that by the time pro golf does come, which it will, I’ll be prepared for it.”

“I was kind of thrown in the fire … when it was the middle of March and all of a sudden, I had to consider whether I was ready or not,” Feagles said. “I just didn’t think I wanted to do it yet. Another year is phenomenal, I thought I only had two more months. I’m definitely going to try to use it to the best of my advantage.”

Feagles has some big plans for Illinois men’s golf next year and is excited for a new season. He has his eyes on the national championship and has immense confidence in his teammates, especially with how great the start to the spring season was.