Illini of the season: Kovacevic, Brown show dominance of program 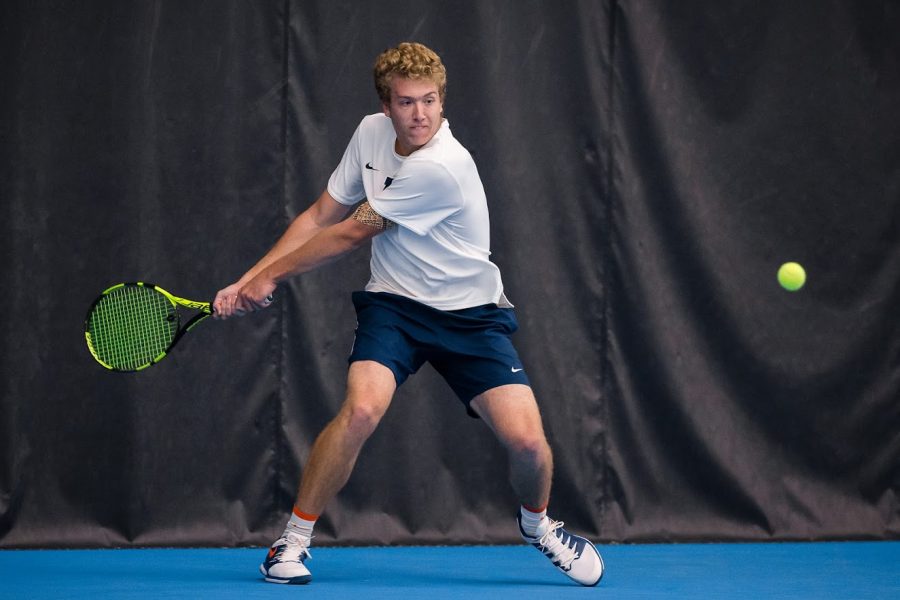 Illinois’ Alex Brown prepares to return the ball during the match against Penn State at Atkins Tennis Center on Friday, April 12, 2019. The Illini won 4-3.

Despite a challenging start to the season, the Illinois men’s tennis team was beginning to gain momentum, heading into conference play with a perfect 2-0 record. The season had many bright spots despite being cut short, with many players standing out in singles and doubles play. Now that the season is over, let’s take a look back at the major players of this year: the season MVP, the senior who will be missed most and a rising underclassman.

In the competition for the year’s most outstanding player, Brown is the clear front runner. This season saw the junior reach a career-high singles ranking of No. 9 on Feb. 18, and Brown ended the season at No. 15 for singles as well as No. 25 for doubles, along with senior Aleks Kovacevic.

Brown’s overall record for the season stood at 11-7 for singles and 8-5 for doubles, leaving his current career record at 57-36 for singles and 50-33 for doubles. The highlight of the season was likely Brown’s 6-3, 4-6, 6-4 singles road win over No. 70 Dominik Stary of Northwestern on March 7, which he followed up the next day with a near-victory over No. 24 Athell Bennett of Purdue; Brown was leading when the match was left unfinished after the Illini clinched the meet. These two victories helped him secure the Big Ten Men’s Tennis Athlete of the Week on March 10. This was Brown’s first award of the season and fourth overall.

Brown also helped contribute to a 6-2 win over the No. 9 ranked doubles pair of Sven Lah and Constantin Frantzen of Baylor on Feb. 29. This helped Brown and his partner, Kovacevic, move up to the No. 25 spot in the final season rankings.

“Alex Brown was in the midst of the best season he’s ever had,” said head coach Brad Dancer in a recent press conference.

Dancer also added that Brown was “headed (toward) probably being an All-American.”

Despite Brown’s marquee year being cut short, his status as a junior means he will be able to return next season and once again lead the Illini to a Big Ten and national title.

Senior who will be (dearly) missed: Aleks Kovacevic

It is hard to understate the effect Aleks Kovacevic has on the Illini program. The New York native has been crucial in keeping the Illini in the national conversation, and his commitment to the team has been unwavering despite the opportunity of turning to professional tennis. Despite holding a meager 6-8 singles record this season along with a 6-7 doubles record, Kovacevic showed spurts of brilliance throughout the year, propelling him to a potentially stellar final year as an Illini.

The highlight of this year was likely his defeat of defending NCAA singles champion Paul Jubb of South Carolina at the preseason MLK Invitational in Atlanta, Georgia on Jan. 19. Despite being unranked at the beginning of the season, Kovacevic eventually moved to a No. 85 ranking, which sprung up to No. 41 after defeating No. 30 Sven Lah in a home loss to Baylor on Feb. 29. For his efforts, Kovacevic was also awarded the Big Ten Men’s Tennis Athlete of the Week on March 3.

However, Kovacevic will likely be best remembered for his junior season in 2018-19, where he made it to the NCAA men’s tennis singles semifinals, becoming the third Illini to do so and the first since 2007. Kovacevic finished the year with a 34-7 record and was named an Intercollegiate Tennis Association All-American and First-Team All-Big Ten selection at the season’s end. With this honor, Kovacevic became the 20th Illini to be named an All-American. Kovacevic was also awarded the Most Valuable and Most Improved Player by his team at the season’s conclusion.

Kovacevic also excelled off the court, being named to the Academic All-Big Ten squad from 2017-19. Kovacevic’s final Illini record sits at 88-34 for singles and 52-47 for doubles, including an astonishing 23-3 conference singles record. Although Kovacevic is unsure of his decision to return to the program next year, he will no doubt be remembered as a fierce competitor and one of the greatest Illini to ever step on the court.

There will be no shortage of talent to fill Kovacevic’s shoes if he decides to leave the program, as sophomore Siphosothando Montsi has shown this season. This season saw Montsi reach his career-high ranking of No. 42 on Feb. 5, highlighted by the team’s sole point in a road loss at Duke on Jan. 31. Montsi dropped out of the rankings following a few challenging losses but later re-emerged in the rankings, finishing at No. 64 by the season’s end.

Montsi shows great promise for the future, improving to a 17-9 singles record after going 10-10 for his entire freshman year. Montsi also improved to 9-8 in doubles play this year after seeing a winless 0-3 campaign last year.

Montsi contributed to a four-match doubles win streak to end the season with redshirt junior Gui Gomes, which featured wins over Notre Dame, No. 21 Baylor, No. 23 Northwestern and Purdue. Montsi will continue to grow during his time with the program, helping the team achieve its national goals.