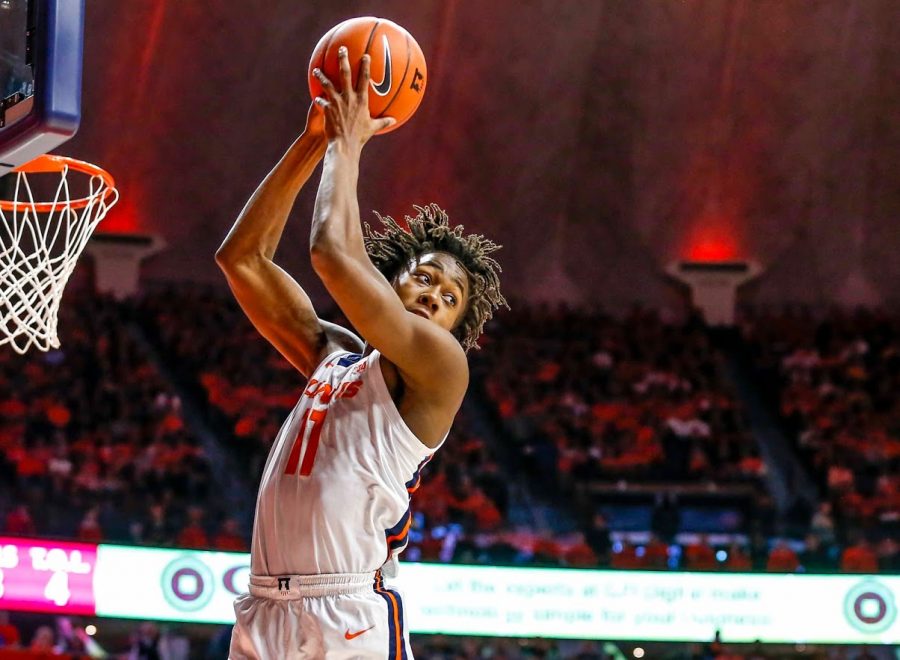 Sophomore Guard Ayo Dosunmu captures a rebound during the match against Iowa on March 8.

It was supposed to be the season of redemption. After missing the NCAA Tournament for six straight seasons, this was the year Illinois men’s basketball was going to turn it around and make the Big Dance. Unfortunately, the opportunity to undoubtedly fulfill that destiny was taken away due to precaution around the COVID-19 pandemic. Nonetheless, the individuals who stood out are still worthy of recognition for the 2019-2020 Illini.

Not a tough decision here. The Illini were barely treading above water in late December before making a concerted effort to put the ball in Dosunmu’s hands late in close games. That decision completely changed the trajectory of the season, as Dosunmu’s talent and decision-making stole wins at Wisconsin, Michigan and Penn State that likely wouldn’t have gone Illinois’ way with anyone else running the show. The Illini went from a team on the outside looking in, to a 21-10 tournament lock, as Dosunmu blossomed down the stretch.

Averaging 16.6 points and 4.3 rebounds per game, Dosunmu earned a First-Team All-Big Ten nod from the media, falling to the second team on the coaches’ ballots.

The devastation across the Illini nation after Dosunmu’s injury scare on the final possession of the Feb. 11 loss to Michigan State speaks volumes about the sophomore’s value. However, after the scare was ultimately proven less severe, Dosunmu returned and rallied the Illini down the stretch to earn a fourth-place finish in what was easily the deepest league in the country this season.

Though making the NCAA Tournament was Dosunmu’s quintessential goal when he elected to return for his sophomore year, the sophomore realizes that fighting a global pandemic is a more pressing issue.

Going forward, Dosunmu has yet to announce his intentions for 2020-2021. At the moment, he’s projected anywhere between the second round and going undrafted by most NBA Draft analysts. Regardless of his decision, Illini fans will always appreciate his efforts to bring the program back to national relevance, especially his contributions when it mattered most in 2020.

Senior that will be missed: Andrés Feliz

Illini fans, for generations to come, will look at a player that averaged double figures on just 26.7 minutes per game and truly appreciate Feliz’s contributions in 2019-2020. In what was a down season, offensively, for junior guard Trent Frazier, Feliz was there to pick up the slack, never afraid to attack the basket whenever a path presented itself, regardless of his 6-foot-2 frame.

Despite not starting a game between Dec. 7 and Feb. 11, the senior’s scoring average never fell below double figures the entire season. Though some may point to the two-game stretch of wins away to Michigan and home to Minnesota as Feliz’ best moments of the year, his most important contribution was easily his steal with six seconds remaining against Indiana on Mar. 1 to preserve what went on to be a one-point victory for Illinois, significantly securing the team’s tournament status.

On a youthful, inexperienced roster, Feliz was always the calming veteran presence to steady the team. Beyond being the most mature player on the court, Feliz also has many responsibilities to fulfill off the court as a newly-wed, and his wife is making sure he contributes his duties as a husband, with the season now in the books and plenty of free time on his hands.

The Domincan’s role as an undersized yet aggressive, unselfish and versatile guard could be one for another incoming Latino Illini guard to slide into: Puerto Rican freshman Andre Curbelo.

Though his career certainly ended sooner than he would have liked, Feliz will always be remembered for never being afraid to take chances on the court, with his gambles paying off more often than not.

A week ago, this would have been the most natural award to hand out. Of the three freshmen that joined the program in the 2019 offseason, Kofi Cockburn was the only one to make a real imprint, and what an imprint it was.

Averaging 13.3 points and 8.8 rebounds, Cockburn made up for his lack of polish with sheer power to have success against easily the most talented crop of big men the conference has seen in a very long time.

Cockburn’s efforts were rewarded at the end of the season, as he was voted Big Ten Freshman of the Year by both the coaches and media. With rim-rattling dunks, crowd-energizing blocks and a humble yet friendly personality, Cockburn quickly established himself as a fan favorite in Champaign.

However, despite not being projected as a likely-to-be-picked prospect, the freshman chose to declare for the 2020 NBA draft, leaving the possibility open to return to school by not signing with an agent. Could Cockburn just be trying to generate some attention around his name heading into his sophomore year? Or could he be looking at this year’s weakly-regarded draft class, or even his advanced age, and believe that now is the best time to jump to the professional ranks?

In the event Cockburn decides to turn pro, Benjamin Bosmans-Verdonk is a mostly unknown yet still intriguing prospect for 2020-2021.

The Belgian freshman sat out most of the season with a foot injury, meaning he’ll likely continue as a freshman, through getting a redshirt for this past year, heading into next season.

A big-bodied forward with a soft touch, Bosmans-Verdonk will probably compete with junior Giorgi Bezhanishvili for playing time at center, along with senior Da’ monte Williams and junior transfer Jacob Grandison at the power forward spot as well.

Bosmans-Verdonk’s six points and four rebounds against The Citadel on Nov. 20 showed the energy he could provide in Brad Underwood’s rotation next season.