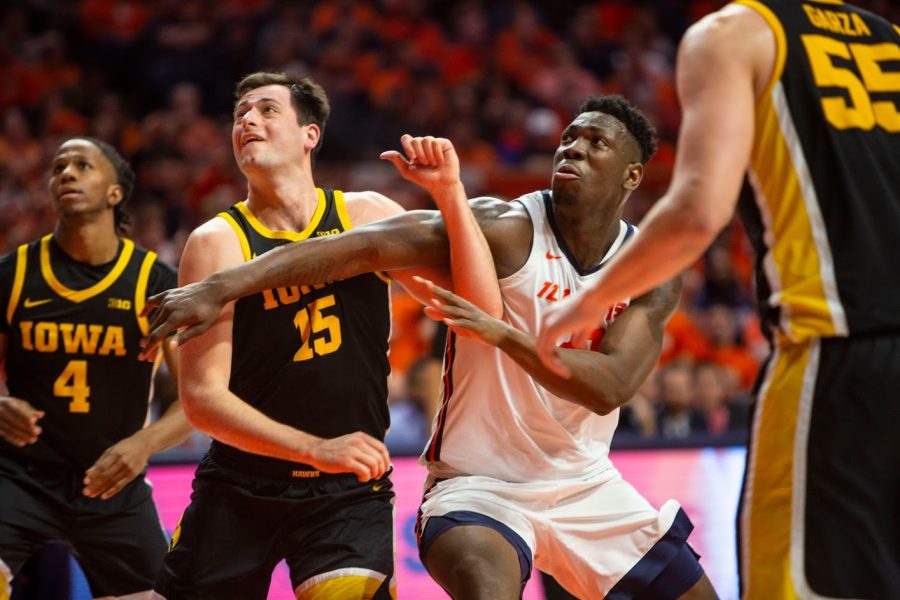 Freshman Center Kofi Cockburn jockeys with Iowa Forward Ryan Kriener for position under the basket during the match against Iowa on March 8. The Illini won the match 78-76.

Whispers of Cockburn’s decision to go to the NBA circulated early in the season when the freshman center routinely posted double-doubles against mid major teams, but when Big Ten play began, Cockburn’s production decreased and became less consistent. Still, despite decreased production, he did enough to earn Big Ten Freshman of the Year.

In a league that was dominated by elite men on a nightly basis, Cockburn gave Illinois an equalizer in the paint. His size, physicality and strength were too much for many Big Ten bigs. Illinois hasn’t had a big like Cockburn since Shaun Pruitt in the late 2000s. But even Cockburn has about two inches and 45 pounds on Pruitt. Cockburn is a matchup nightmare for opposing teams because of his size. He gives Illinois something most teams don’t have.

What does Illinois lose if Cockburn decides to go pro? The simple answer is a lot, but there is much more to it.

Illinois seemed to go as Cockburn went in 2019-2020. When Cockburn had one of his signature games, Illinois won. In games that he struggled, Illinois wasn’t able to get over the hump.

Illinois went as Cockburn went. He gave Illinois an opportunity to win games that they would not have won in the past.

How does Illinois replace that production? Sophomore Giorgi Bezhanishvili proved as a freshman that he can be a productive offensive center, but he lacks physicality and isn’t the best defender or rebounder.

Bezhanishvili’s production was destined to decline because of Cockburn’s arrival, and perhaps if he moves back to the five his production will increase. Yet he still doesn’t have the size or tenacity of Cockburn.

Jermaine Hamlin will presumably come off the bench next season, but as a freshman, Hamlin didn’t get many opportunities to play because Cockburn and Bezhanishvili were ahead of him on the depth chart.

As a freshman, Hamlin appeared in 16 games, averaging only 4.1 minutes a game while scoring less than one point a game. Hamlin can’t be counted on to provide consistent production next season because he didn’t provide enough hope for the Illini to consistently rely on him to produce.

Cockburn isn’t inked into going to the draft. He has until June 3 to decide if he wants to come back to Illinois for his sophomore season, but Illinois needs to be prepared to replace Cockburn’s production if he does stay in the draft.