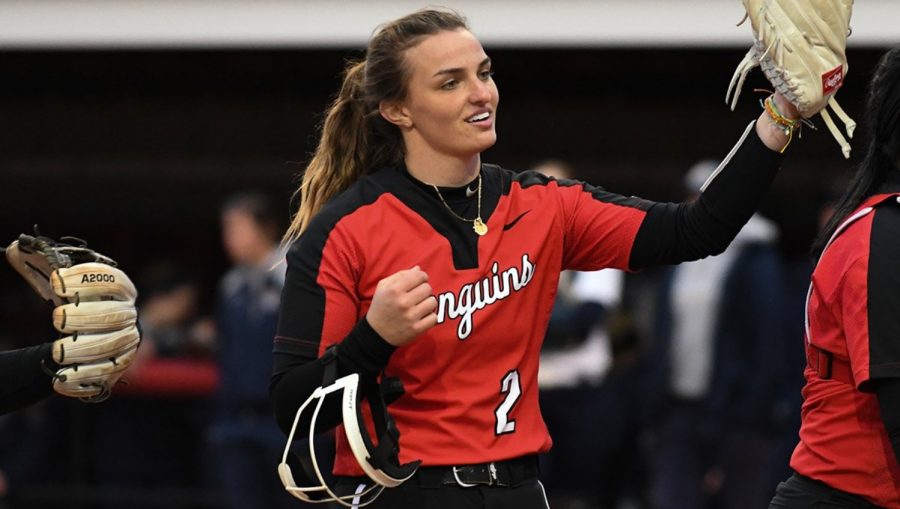 Freshman Addy Jarvis raises her arm as she walks off the field during the match between Youngstown State and Kent State on March 20, 2019.

After a long journey, several years in the making, Illinois sophomore pitcher Addy Jarvis found her home away from home.

Jarvis began her collegiate career at Youngstown State, which is a 20-minute drive from her hometown of Vienna, Ohio, before transferring to Illinois last January.

She began her softball career on the mound at the age of nine but began pitching at age eight. Her now 31-year-old sister, who went on to play softball at the University of Charleston in West Virginia, was playing travel softball, and Jarvis began to emulate the pitching she saw at her sister’s tournaments.

“I had been pitching already for about six months,” Jarvis said. “I was mimicking the pitcher, and the pitching coach came over and was like, ‘Hey, does she want to start throwing?’”

Jarvis’ parents were initially opposed to the idea of their daughter pitching but eventually relented and Jarvis began her travel softball career soon after.

When Jarvis was 10 her friend Avrey Steiner, who is on the Illinois softball team and Steiner’s father convinced Jarvis to play travel softball.

Jarvis spent the next two seasons playing with Steiner before switching teams and ultimately joining a team based in Pittsburgh, an hour and a half from her hometown.

“Finally, at 13, I found a team: Pittsburgh Spirit,” Jarvis said. “I played with Spirit for, I think, five years, maybe six, and I still talk to those girls every day.”

Jarvis and Steiner remained friends but also competed against each other in high school. When it came time for Jarvis to pick a school to transfer to, being teammates with Steiner again was part of what she liked about Illinois.

As Jarvis went through middle school and high school, she began to get recruited for college softball. She did not have a dream school and said her early recruitment process has led her to advocate for college recruitment to begin later.

She visited various campuses during her recruitment process, including Illinois’ rival Purdue and her hometown school that she ultimately attended, Youngstown State.

Jarvis committed to her hometown college at 15 and said its proximity to where she grew up was a large factor in her decision to attend school there.

Once she got to campus, Jarvis had a strong freshman season and started 23 of the team’s 54 games, the most of any pitcher on the team. She had a 12-11 record with a 2.58 ERA, the lowest on the team. Though she finished the season winning the Horizon League Freshman of the Year, she slowly realized Youngstown State wasn’t the school for her.

“I had a good freshman year (but) I was a little unhappy where I was at,” Jarvis said. “For me to grow as a person and as a player, I needed to get away and maybe try to go to a bigger school.”

She entered the transfer portal last fall and numerous schools reached out to her. Having been through the recruitment process once, Jarvis had a better idea of what she was looking for.

Once Jarvis visited Illinois, she knew Champaign-Urbana was the destination where she wanted to take her talents. It helped that Steiner was a familiar face in Jarvis’ new home.

“As soon as I stepped on Illinois’ campus, I kind of knew, like, ‘Wow, this is where I think I want to be,’” Jarvis said. “To be able to play with a former teammate that I was already, like, comfortable with and have that connection there was, like, awesome.”

Jarvis is not the only player to have joined the Illini roster this semester. Freshman Brianna Nykaza also transferred to Illinois in January.

Nykaza, a Chicago native, began her career at North Carolina State but transferred to Illinois in January.

Just after the new year began, Jarvis and Nykaza began acclimating to campus. The two had previously communicated before coming to campus, and Nykaza was happy to have a buddy who was new to the program as well.

Jarvis has had a strong start to her Illinois career, with a 6-6 record and a 2.42 ERA. Most recently, she picked up a win against Missouri March 11.

Even though Jarvis has been at Illinois for this calendar year, she feels the University of Illinois is the right fit for her.

“After the next three years, I mean I’ll probably always come back to campus, I’ll always be doing stuff,” Jarvis said. “I really love it there, and I’m glad I made that decision.”