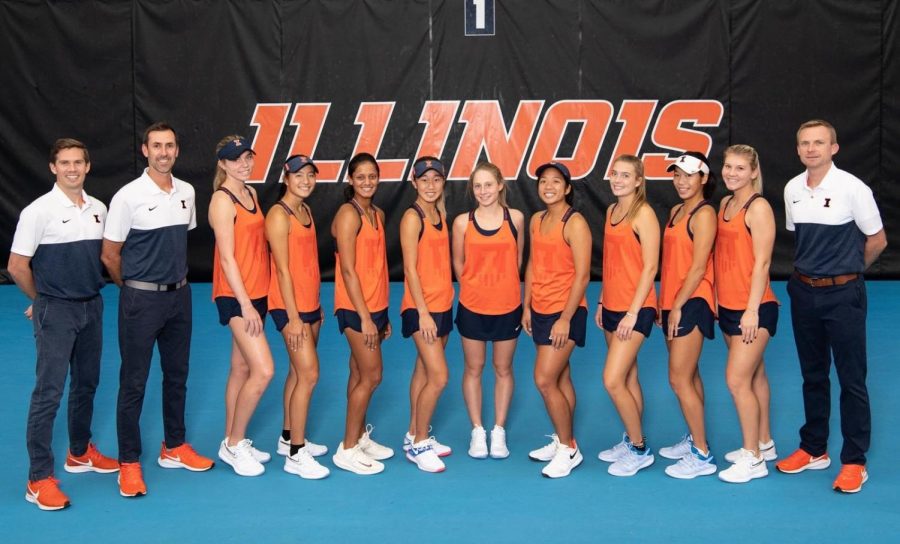 The Fighting Illini Women’s Tennis Team smiles for a photo at the Atkins Tennis Center.

Atkins Tennis Center is a 29-year-old tennis facility that houses the Illinois men’s and women’s tennis teams. While it doesn’t show on the outside, playing at Atkins has become one of the largest home advantages in college women’s tennis over the past few seasons.

Through the past three seasons, the Illini women’s tennis team has dropped just five matches at home. Two of those seasons, the team had only one home loss.

According to head coach Evan Clark, the tear of success at home was likely ignited by an improbable home win against No. 11 Texas early in the 2017-18 season. He fondly calls it the team’s first “signature win” during his time as head coach.

That same season brought an immensely talented freshman class who helped lead the team to an 11-1 home record. Now juniors, the group of Asuka Kawai, Mia Rabinowitz, Sasha Belaya and Emilee Duong have been some of the team’s consistent performers through their run of home wins.

“It’s all about the players,” Clark said. “We had the right personnel in there, the right belief, the right kids. They win the matches.”

There have been a couple of other factors contributing to the team’s consistency at home, namely the facility itself and the fans.

Although Atkins is almost 30 years old, the players consistently rave about the quality of the facility. The courts themselves are well-maintained, which allows the players to have a predictable feel for their environment at home.

“We’re just so used to the courts,” Kawai said. “Going into matches, we know how the ball will bounce.”

Quite possibly the largest benefit of playing at home, however, is the very unique support the team receives from fans on match days. The makeup of crowds at women’s tennis matches is smaller than most other sports but much more intense, as many fans have special connections with the team.

“A lot of the people that come in (to Atkins) for lessons or clinics are the same people that I see at men’s and women’s tennis matches,” said Nathan Mechling, senior in AHS and the Illini Pride leader for women’s tennis. “I recognize a lot of the community fan support, and I like that because it shows that these people care about tennis”

Although the Illini tennis teams practice and compete in matches at Atkins, it is also open to the public. This has helped foster significant local support for the team on a much more personal level than other sports.

“I have more energy,” Kawai said. “I feel the support when I’m playing on the court.”

Beyond just local fans, the women’s team has developed what is now a longstanding relationship with the men’s tennis team. Both teams attend all of each other’s home matches.

“(The men’s tennis team is) the rowdiest of any of (the fans),” Clark said.

During women’s matches, the men’s tennis team is often found flocking from match to match, outpouring vocal support to whichever player needs it the most. In a sport heavily grounded in tradition and respect during points, the men’s team pushes the envelope of being too loud as far as it can go.

“Their voice is extra, extra loud, and it changes everything,” Kawai said. “You definitely feel more supported.”

Clark has been able to cite the team’s consistent success at home to motivate players to continue bringing their best on match day. Players and coaches alike use the phrase “defend Atkins” as a mission statement of sorts in regards to the team’s attitude going into home matches.

“Every opposing coach knows coming in it’s not going to be easy playing (at Atkins),” Rabinowitz said.

Going forward, the team is going to need to work to maintain their success at home. While taking only five home losses over a three-year span is impressive, the team has begun to show cracks in what had been a historically strong home run. Three of those losses came during a severely shortened season this spring.

The group of juniors that kickstarted the home streak won’t be around the team forever, so the young talent on the roster will need to step up to the occasion quickly. Only time will tell, but with dedicated fans, an excellent facility and a talented coach, Atkins is in line to be a scary place for opponents for years to come.