Heimes finds success in, out of pool 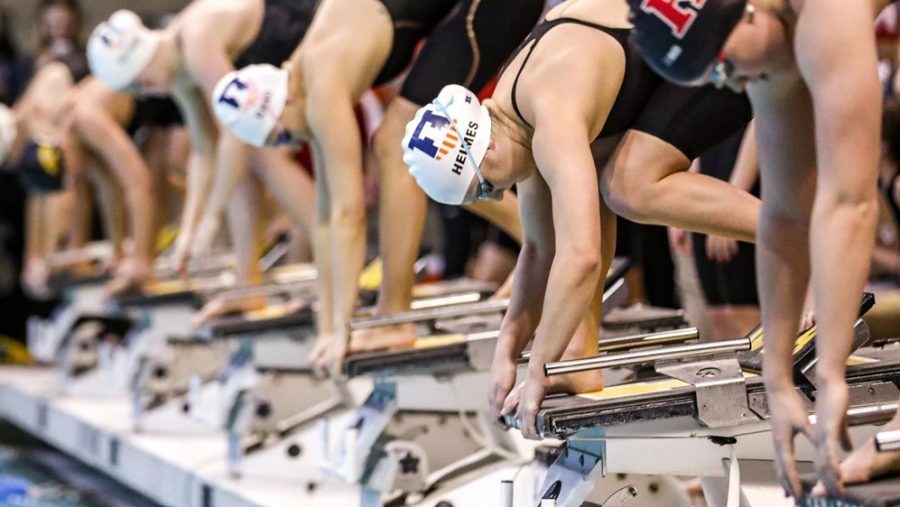 Sophomore Kaylee Heimes readies herself on the starting block during a swim meet.

Illinois swim and dive sophomore Kaylee Heimes used to be scared of tornadoes when she was younger. Instead of continuing to be afraid of them, Heimes turned her fear into research to learn why tornadoes are the way they are.

“When I was in middle school, I found out that I could make a career out of it,” Heimes said. “Ever since middle school I’ve known that this is what I want to do.”

With Heimes knowing she wanted to study weather and also swim collegiately, Illinois was the best choice, and she calls it the “best combination” for her.

“Illinois’ atmospheric science program is so good, like one of the top programs in the country,” Heimes said. “Swimming, obviously, is also very good and part of the Big Ten.”

As Illinois is a big and reputable school, Heimes couldn’t pass up the chance to be an Illini.

“There aren’t that many schools with a good meteorology program and out of those schools, not many of them have a really good swim team,” Heimes said. “It kind of made it easy to choose which school.”

Although the department of atmospheric sciences might be small, Heimes says they have been a huge part of achieving her goals.

“All the professors care about you, and we all go by first name basis,” Heimes said. “You could walk into any of their offices at any time and just talk to them about the weather and you’ll have a good half-hour discussion on why it’s raining outside or something.”

Both professors and graduate students in the department are always open and available to help students with questions on homework.

“All the other sophomores in my major, we all help each other and we all have this group chat, we all go to the same classes together,” Heimes said.

With around seven to 10 people in her sophomore class alone, Heimes and her classmates always have someone to turn to for help.

Almost halfway into Heimes’s major, she has had many opportunities to learn, do research and expand her knowledge on anything about weather.

“We forecast every morning and night and basically during the day too,” Heimes said. “We just try to find storms and hopefully if you don’t bust you’ll see a good storm of structure and or maybe even a couple tornadoes.”

Unfortunately, due to the coronavirus and cancellation of summer in-person classes, Heimes will not be able to take the class again.

Another opportunity Heimes has earned is conducting research.

At the American Meteorological Society Conference in Boston, Massechusetts earlier this year, Heimes presented research on updrafts and patterns on clouds.

Presenting in front of many students, faculty members and potential employers from all over the country was quite nerve-racking for the Quakertown, Pennsylvania native.

“Both of them just prepared me so well,” Heimes said. “Bob presented what he was presenting to me so that I could learn from him. So having him to look up to really helped me a lot going into the presentation.”

Heimes also talked to people in the audience to help ease her nerves.

“There’s a whole bunch of big scientists in the room,” Heimes said. “This is so much pressure, but talking to them you realize they’re people too and they were in the same spot as I was.”

Heimes earned a second-place finish in the conference of weather modification out of all the undergraduate and graduate students who presented. The group did not attend the awards because they were leaving that same night, so Heimes found out from her adviser.

“I walked down to leave and my adviser was like, ‘Yes, you got second place!’” Heimes said. “I was like, ‘What, okay, that’s pretty cool.’”

Some weather Heimes would like to experience in her lifetime is softball-sized hail and lake effect snow. As for tornadoes, Heimes wants to see a wedge tornado, which is when a tornado is more wide than it is tall. Another one is a pancake stack supercell, which is a rotating thunderstorm that looks exactly like a stack of pancakes.

With so many fields to go into for the future, Heimes wants to stick to research.

The Illini sophomore has also thought of becoming a professor, but she isn’t so sure about it yet. However, Heimes is confident she wants to continue onto graduate school.

Heimes says her idol and role model is Tim Samaras, a storm chaser who also did research on tornadoes. Samaras and his team died from a tornado in 2013.

“He was also super focused on the science part of it,” Heimes said. “His story is pretty cool because he never got a college degree, but he had so much passion and loved building things for the weather and used that passion to chase storms and made a huge contribution to the field.”

As a student-athlete, Heimes uses what she learns in the classroom when she’s swimming.