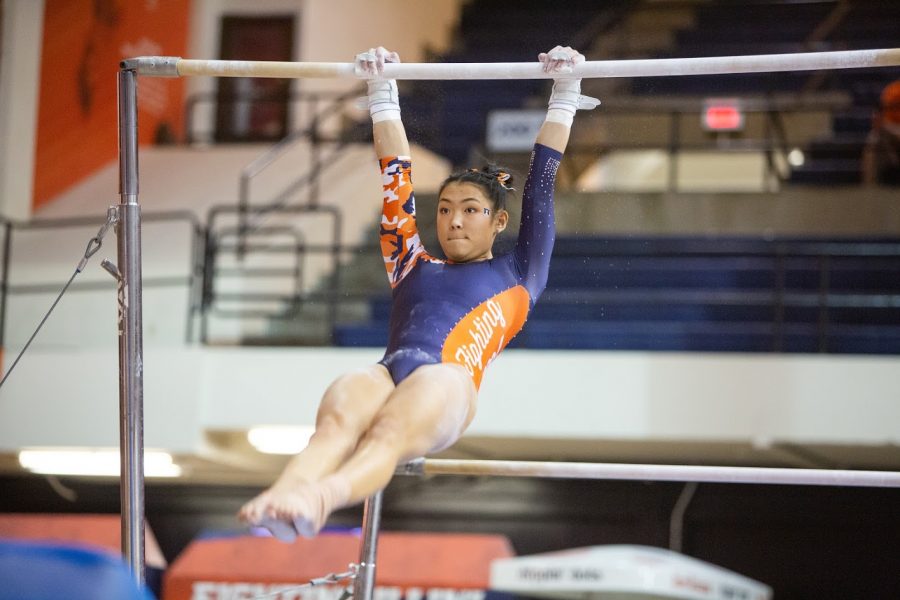 Freshman Mia Takekawa performs her Uneven Bars routine during a match against Penn State on Feb. 7.

In Mia Takekawa’s first season competing for the Illinois women’s gymnastics team, she has already left a strong impression. The freshman has received a myriad of accolades including being named Big Ten Gymnast of the Week twice and winning eight individual event titles.

She has even made history for the Illini during a Jan. 9 meet against Lindenwood and Temple. Competing on the beam, Takekawa scored a perfect 10 for the first time in the program’s history. However, Takekawa’s favorite moment from this past season was her first meet when Illinois faced Missouri.

“We were not favored to win the competition, so I went through the competition putting it all out there,” Takekawa said. “Just going through my first competition with the team was so exciting, and winning that meet just felt like validation for all the work we had done.”

“I was completely surprised,” Takekawa said. “I didn’t even know it was a possibility to receive a scholarship at the end of the year.”

Receiving an unexpected scholarship is always a good thing, especially for a student-athlete, but to Takekawa the scholarship means much more than financial flexibility.

“It validates me as a contributor to this team,” Takekawa said. “It means a lot that [the coaches] put this much value on me to make the effort.”

In front of her parents, Takekawa was getting teary-eyed and emotional while her parents hugged and kissed her.

Head coach Nadalie Walsh could only smile and praise Takekawa. Walsh commended Takekawa for her excellence as an athlete, a teammate and also a student, describing Takekawa as “mentally tough” and “awesome to coach.”

Takekawa is more than just a gymnast; she exemplifies the label of student-athlete. She came to the University because of the success of the gymnastics program, but also because it is one of the best engineering schools in the country. Takekawa is a bioengineering major, and that alone can consume a student’s life, so with college gymnastics as well, Takekawa has had to find a way to manage her time.

“The hardest part is staying organized and keeping track of everything I have to do, between homework, classes, study hall hours, getting enough time to eat and then practice, being able to stay organized is important,” Takekawa said.

Takekawa has it a little easier nowadays. With the coronavirus forcing everyone to stay inside, the NCAA has canceled all winter and spring competitions, and most athletic facilities are closed at the moment, including at the University of Illinois. Takekawa is back home where she is spending time with her family and overjoyed yellow lab, Odyssey.

“Obviously I miss gymnastics, but being able to take a mental break from the craziness of the schedule has been nice to just decompress and come home,” Takekawa said. “I find myself sitting outside and eating dinner with my family, taking walks with my dog, things that I wouldn’t be able to do even when I come home for the summer.”

Takekawa has tried to keep up her training at home, but she’s come across some struggles. With sports like basketball, volleyball and football, you can still train at home, but gymnastics has many elements that can’t be easily replicated. In quarantine, Takekawa has been focusing more on the mental side of the sport.

“It’s not like I can go to the local football field and practice my sport, so it’s a lot of mental training right now,” Takekawa said. “Coach Nadalie, coach Stephen and coach Kaitlyn have all sent out training packets, mental training, so I do a lot of visualization of my routines, and I have been watching some of the videos from this past season.”

While Takekawa would much rather be competing on the mat at Huff Hall, she has enjoyed taking time to just relax. She still virtually meets with the team constantly, and to keep spirits up, Walsh sent out a packet of fun activities to do while at home. Takekawa has really enjoyed trying to juggle a soccer ball for as long as possible.

Takekawa even spent her birthday just a few weeks ago while in quarantine. She wasn’t able to see any of her friends in person, but she was able to spend it with her family, something she didn’t expect, FaceTime her friends, and ordering takeout from her favorite restaurant back home.

Sports are still up in the air, even as far as next year, but Takekawa continues to prepare and hopes to build off of an impressive freshman campaign.