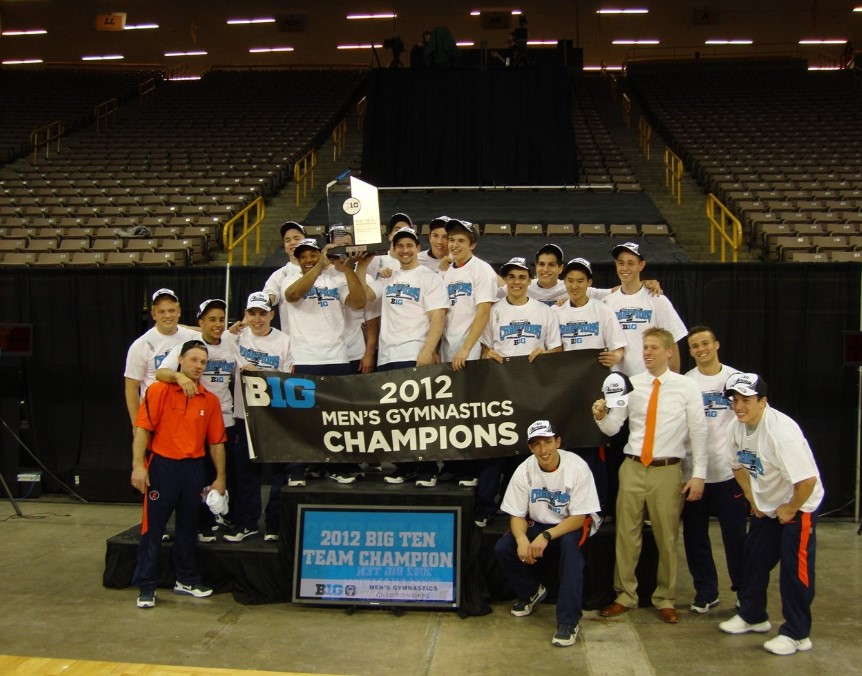 The University of Illinois Men’s Gymnastics team poses for a photo after winning the Big Ten Championship on April 7, 2012. The team would go on to win the National Championship as well.

The gymnasts who competed in 2012 and brought the national title back to Champaign-Urbana have long since graduated from the University. Only Spring and then-assistant coach Daniel Ribeiro (now the associate head coach) are active members of the team eight years later.

Spring took over the team in 2010 following the retirement of longtime head coach Yoshi Hayasaki. As an assistant coach under Hayasaki, Spring helped recruit and build the team he would inherit and lead to the national championship.

“I inherited a great team that was doing very well,” Spring recollected. “Going into that year, I knew that we had a shot.”

The Illini finished the 2011 season with a 25-8 record and as Big Ten champions for the third consecutive year. In the NCAA championships, the team finished third but with two individual champions — senior Ribeiro and junior Tyler Mizoguchi — and four All-Americans. Spring was motivated to pick up where the team left off in 2011, but it was a comment that redshirt senior Paul Ruggeri said in a team meeting that motivated Spring the most for 2012.

“He said, ‘If we don’t win it this year, I’m going to be embarrassed. This is the team. I’m not leaving this team without a national championship’,” said Spring. “Coming from one of your athletes, it’s a very powerful statement.”

The Illini finished the regular season with a record of 12-2, including a win over the No. 1 Oklahoma Sooners, before winning their fourth consecutive Big Ten championship on April 6, 2012. Two weeks later, the Illini were heading to the University of Oklahoma for the NCAA championships, ranked No. 4 in the nation.

For the team’s qualifying session on April 19, Spring didn’t have his best gymnasts compete. He wanted his best to be rested and fresh for day two.

“We had such a strong team, we were prepared to rest some guys,” Spring explained. “It was purely to get through qualifying and nothing more. Put a score up, beat that fourth team in that session and move on to day two.”

The Illini did more than just beat the fourth-place team in the session; they placed first in the session with a season-high score of 356.250, edging out the top-ranked host Oklahoma by five one-hundredths of a point.

On day two, the Illini started strong on vault and parallel bars but struggled on high bar, an event which the team was ranked No. 1 in the nation. The Illini weren’t alone in their high bar struggles. According to Spring, high bar was a difficult apparatus for all of the teams that year. But Oklahoma started to accumulate a lead over the Illini in the third and fourth rotations. Going into the fifth rotation — with the Illini on pommel horse — Oklahoma led Illinois by over two points.

“We went into pommel horse knowing that’s an event where you can have epic swings one way or another, and we had to just rock out,” said Spring. “I remember them warming up, we came off a rough floor, and I remember thinking, ‘I need to be with these guys to keep them calm.’”

As his pommel horse team was warming up, Spring was with them, joking around and trying to keep the mood light. When they competed, they shattered the school pommel horse record, closing the gap between their score and Oklahoma’s score.

The last event of the meet for the Illini was still rings, an event that they performed well at all year long.

“After the horse rotation, it was close, but we knew we had the rings team to get it done. They felt it. Oklahoma was ending on high bar,” Spring said. “Going into rings, the guys started to feel the energy and have that swagger. Routine after routine, that kept building.”

As Illinois was “knocking out sets” as Spring said, Oklahoma was struggling on high bar.

“You could feel the energy of the Oklahoma home crowd get sucked out of the venue like a vacuum,” Spring said. “I think that’s when we ran away with it.”

When the meet was over, Illinois had overtaken Oklahoma to win the national championship with a season-high score of 358.850, ending the 23-year championship drought for the Fighting Illini men’s gymnastics team. It was a special moment for Spring when he realized the Illini would win.

“I think back to that moment with a big smile,” Spring said. “I’d pay a lot of money to be able to relive that moment again.”