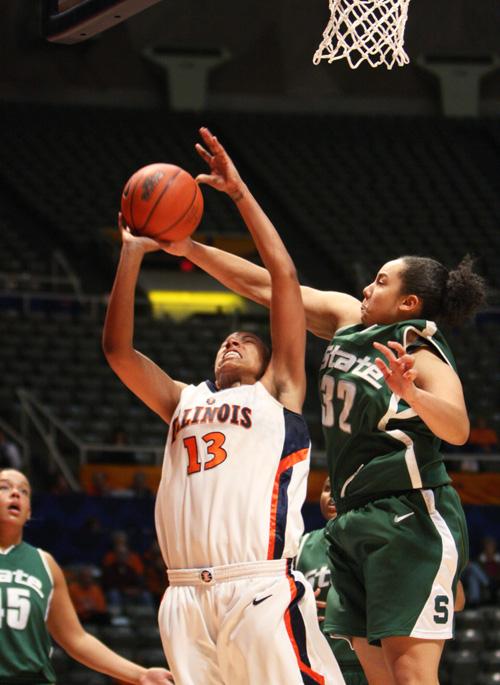 Center Jenna Smith (13) attempts a shot during the game against Michigan State at Assembly Hall on Feb. 5.

The Illinois women’s basketball team has struggled over the last several seasons. However, the program has had its success in the past in large part because Illinois has had some great players in their history. Here are Illinois’s all-time starting five.

Jenny Johnson was a four-year guard who played for the Illini from 1984-88.  Johnson was never a high scorer for Illinois, but she was the lead guard for back-to-back NCAA tournament runs in ‘86 and ‘87.

In her time at Illinois, Johnson was known for her playmaking ability. She is one of the best passers to come through Illinois, and the numbers show it. She ranks second in program history in career assists, she has three of the 15 best passing seasons and has the fourth-most assists in a single game with 13.

Johnson was also a pest defensively, racking up 173 steals in her career. In spite of Johnson being more of a pass-first player, she is a 1000-point scorer, and her 1987-88 season ranks 14th all-time in 3-point percentage for the Illini. Johnson was named honorable mention to the All-Big Ten team in 1986, and she was a big part of the Illini’s success under Laura Golden.

Undoubtedly the peak of Illinois women’s basketball came in the mid to late 1990s, and Ashley Berggren was no small part from 1994-1998. In her four years at Illinois, Berggren averaged 18 points, 6.7 rebounds and 2.8 assists per game. Berggren has scored the most points in a season, ranks second in career scoring and made the most career free throws in program history.

Berggren was also a major part of Illinois’ postseason success in the late 1990s. Berggren became the first and only player in Illinois history to win Big Ten Player of the Year in 1997, and the Illini won a share of the Big Ten title that season. She would lead Illinois to the Sweet 16 for the first time in school history, where they would fall to No. 1 seed Connecticut. In the following season, Berggren got the Illini to second in the Big Ten and once again made the Sweet 16 before losing to No. 7 seed North Carolina.

While at Illinois, she was the leading scorer on the only two Illinois teams to make the Sweet 16, a Third Team All-American and two-time Honorable Mention and a three-time first team All-Big Ten.

Susan Blauser was only an Illini for two seasons, but she more than left her mark. Coming off back-to-back Sweet 16 appearances in ‘97 and ‘98, the Illini were in need of scoring after their leading scorer from the past three seasons, Ashley Berggren, graduated. Blauser helped immediately, averaging 17.1 points per game in the 1998-99 season.

Blauser was a big reason why the Illini made their third and fourth straight NCAA tournaments in ’99 and ’00. Blauser even made the game-winning shot to beat Louisville in the first round of the 1999 NCAA tournament. She was also a part of nine victories against ranked opponents as well as two Illini teams that won double-digit games in conference play.

She was only at Illinois for two years, but she scored a thousand points, ranks fourth in Illinois history in career field goal percentage, was named team MVP in 1999 and was named to the All-Big Ten First Team in 1999 and Second Team in 2000.

Jonelle Polk was a dominant big for the Illini from 1983-87. She left Illinois as the all-time leading scorer, averaging 17.3 points per game in her career in Champaign-Urbana. Polk helped the Illini make back-to-back tournaments in ’86 and ’87. Playing alongside Jenny Johnson, Polk led Illinois to a record of 39-20 from 1985-1987, and during that time, the Illini went 23-13 in conference play.

Polk was a force to be reckoned with on the glass, averaging 8.1 rebounds per game in her four years and ranking fifth in career rebounding. Polk even grabbed 20 rebounds in a game against Purdue in 1985.

She was a major part of the Illini’s short but successful run in the ‘80s and has been commended for it. Polk was named All-Big Ten three times, First Team in 1986 and 1987 and Second Team in 1985, and she received Illinois’s Female Athlete of the Year award in 1986.

Unfortunately for Jenna Smith, her time at Illinois will be known more for individual success rather than team success. In her four years at Illinois from 2006-10, the Illini never made a tournament and only made it as far as the quarterfinals in the NIT.

With that said, Smith was an unstoppable force inside. Over her career at Illinois, Smith averaged 16.6 points, 9.4 rebounds and 1.8 blocks per game. She is the all-time leading scorer in Illinois basketball history, the all-time rebounding leader, the single season rebounding leader and holds the freshman record for rebounds in a season. Smith is also third all-time in career blocks and has the Illini record for consecutive games scoring double-digit points with 54.

Individually, there is no one that rivals Smith’s success on the court. In 2008, Smith was named an All-American Honorable Mention, and she was named All-Big Ten every season she played at Illinois, First Team in 2008-10 and Honorable Mention in 2007. Smith is also the highest drafted player from Illinois, going to the Washington Mystics 14th overall in the 2010 WNBA Draft.