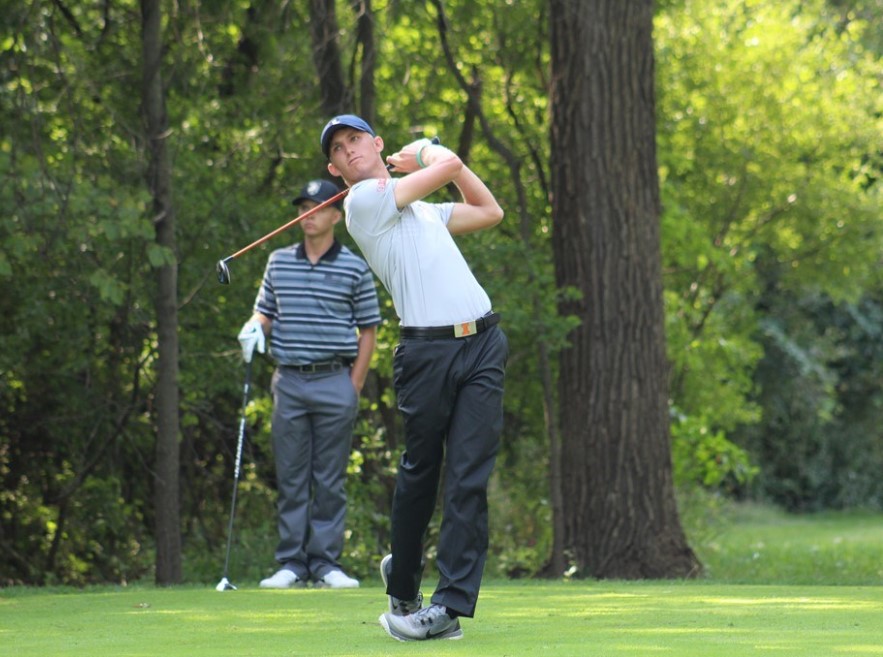 Senior Michael Feagles observes as his ball soars through the air during the OFCC/Fighting Illini Invitational on Sept. 20, 2019.

Senior Michael Feagles is a three-time All-Big Ten First Teamer, three-time PING All-Midwest Region and was the 2017 Big Ten Freshman of the year. The senior was also a huge part of continuing the Illinois men’s golf team’s incredible run, winning 10 of the last 11 Big Ten Championships.

The Illini can thank his grandpa for captivating a young Feagles’ attention to the golf course. The run couldn’t have been carried on without him.

“My grandpa played golf at Notre Dame, and he was my role model growing up,” Feagles said. “He coached and taught me the game, taught me everything. He’s still one of my best friends, and he’s a great person, great guy. He played some pro golf for a little bit and has some incredible stories of people he grew up with and people he played with, and I fell in love with how golf is and the gentleman sport it is … He was the biggest inspiration for me.”

It’s always good when you can spend a lot of time with grandparents and eventually consider them best friends and the ultimate role models.

One of the people Feagles’ grandpa played with was golf legend Jack Nicklaus.

“He played Jack Nicklaus all the time, one of his good friends, and Pete Dye was one of his childhood friends … I’ve met Dye a couple of times, never met Nicklaus,” Feagles said. “He’s a hard man to catch, he’s a busy guy. My grandpa hasn’t seen Nicklaus in probably 20 years, but they still talk on the phone, stay in touch”.

It makes sense that Nicklaus is hard to catch, as he is arguably the greatest golfer of all time. He has won the most major championships with 18 wins, three more than Tiger Woods. Also, he leads three of the four majors in wins.

Another one of Feagles’ grandpa’s friends was successful golf course designer Pete Dye. He created or co-created 120 courses, which spanned 27 different states and seven other countries.

“My grandpa lived in Indianapolis. That was where he grew up, and that’s how we knew Pete Dye,” Feagles said. “Pete Dye ended up designing the course, Crooked Stick. My grandpa joined there, and they stayed connected through that”.

“Pete Dye built a house on 18, so every time I’ve been in Indiana with my grandpa, we’ve gone over to Crooked Stick and gone to Pete Dye’s house and just hung out. Him and Alice Dye, great people, unfortunately, Pete passed away. Alison and my grandpa still talk on occasion, and it seems like she’s doing okay”.

Before he passed, Feagles was a junior in high school and had not yet committed to Illinois, but he was getting recruited to play Division I golf and got encouraging words from him, remembering that the deceased are gone but not forgotten.

The course, Crooked Stick, is significant for Feagles because of its connection to Dye, along with the fact that Illinois has participated in the Crooked Stick Invitational three out of the last five years. Earlier this season the Illini finished seventh, and the other time he participated was during the 17-18 season where the team took third.

It’s truly inspiring to have such a successful family that has talents beyond golf; Feagles’ uncle is former NFL punter Jeff Feagles. He played 22 years with five different teams and is most well-known for his seven years with the New York Giants. He was a part of the Super Bowl XLII victory against the New England Patriots, spoiling their run for the first undefeated season since the Miami Dolphins did in 1972.

The most durable punter in NFL history, he also made two pro bowls in 1995 and 2008 and holds the NFL for consecutive games played with 352. He also played for the Miami Hurricanes, where they won a national championship in 1987 over the Oklahoma Sooners in the Orange Bowl.

“My dad’s brother punted in the NFL for 22 years,” Feagles said. “He’s probably going to be a future Hall of Famer … he was phenomenal … I remember that game (Super Bowl XLII). They were playing the Patriots who were undefeated and that had the catch on top of the helmet. David Tyree from Manning, one of the most famous plays from a Superbowl ever … It’s fun watching them play and it was a pretty cool experience for him”.

He also said that the following season in 2009 when the Giants came out to Arizona to face the Arizona Cardinals, him and his dad got to meet his uncle outside the locker room to visit and see the Super Bowl ring.