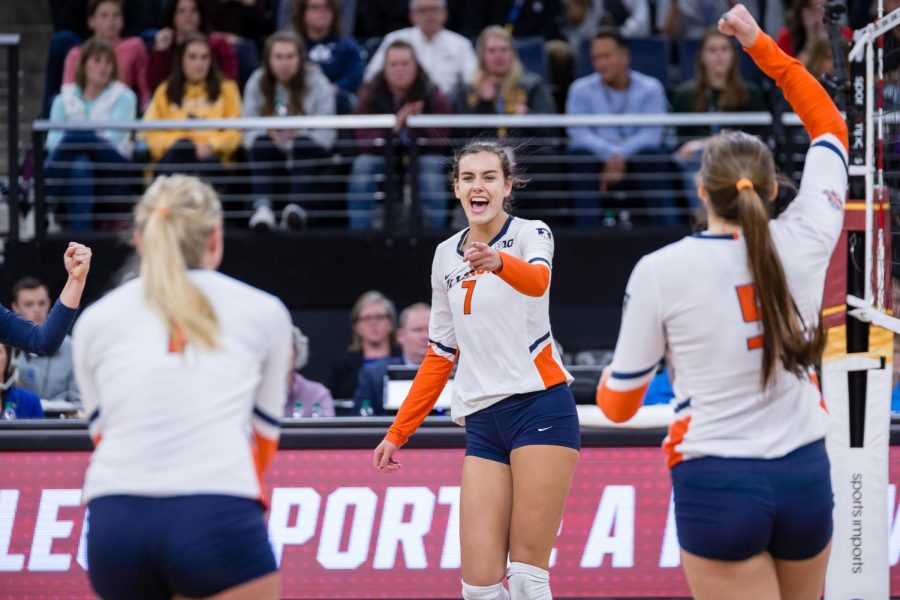 Illinois outside hitter Jacqueline Quade (7) points to setter Jordyn Poulter (1) after scoring a kill during the match against Nebraska in the Final Four of the NCAA tournament at the Target Center on Thursday, Dec. 13, 2018. Nebraska defeated Illinois 3-2.

The Big Ten is a volleyball powerhouse and to succeed in the conference is a huge accomplishment in itself. In 2018, though, the Illini didn’t only succeed in the conference; they did something the program had only done three other times in history. Since 2000, Illinois have made the postseason 11 times, but they never had a Big Ten record as dominant as they did in 2018.

Illinois was coming off of a season where they lost in the Sweet 16 to Michigan State in four sets. The team had a 32-4 overall record with a conference record of 17-3. Chris Tamas finished his first season as head coach of the Illini, and the team was returning a lot of key players.

The only senior from 2017 was defensive specialist Brandi Donnelly with the team virtually returning all of the other important pieces. Setter Jordyn Poulter had been named a second-team All-American by PrepVolleyball in 2017 and hitter Jacqueline Quade an honorable mention. The ladies knew they would be competitive but didn’t realize just how much success they would achieve in 2018.

Illinois entered 2018 ranked 12th in the nation and were confident to begin their season. It was obvious while watching them. The team started the year 14-0, including victories at No. 25 Colorado State and No. 13 Washington. They also went undefeated in each of the four tournaments they participated in, facing ranked opponents in three of them. The Illini were proud of the first part of their season but knew the hardest was yet to come.

Big Ten play started with three straight wins for the Illini, winning at No.16 Purdue, at Indiana and at home over Iowa. The No. 7 Illinois lost their next two games, at home against No. 3 Nebraska and No. 6 Wisconsin.

“With those two losses we took a little bit of time to reflect, and maybe in previous years if we lost to teams like that we would have thought they were just better than us,” Quade said. “But we really had a feeling that we could compete with these kinds of teams, so I thought that was a turning point for how far we could go with it.”

Following their loss to Wisconsin, the Illini won a home match at Northwestern, lost at No. 3 Minnesota, then played one of their biggest games of the year at No. 8 Wisconsin. The match went to four sets and the Illini were out of subs, but they were able to come out with a victory, avenging one of their three losses on the year.

“We got swept at Minnesota which wasn’t what we wanted, but that next game we pulled out a four-set win at Wisconsin,” then redshirt-junior hitter Beth Prince said. “We were down with no subs left, but we grinded it out and won, and I then knew we could take it to the next level with a selfless group on and off the court.”

The Illini didn’t stop winning after their match at Wisconsin. They followed that game up with a win at home against No. 13 Michigan and also won at home against Michigan State and Maryland. Another big game at ninth-ranked Nebraska resulted in a second avenged loss for the Illini with a win in four sets.

Illinois went on to win its final eight games, including home victories over ranked Penn State and Purdue teams, ending the regular season on a 13-game win streak. The regular season ended with a 17-3 conference record, a program best since 1992, along with an incredible 13-1 record on the road and a national ranking of third.

Although the team didn’t elect a captain off the court, the Illini was full of leaders. Multiple people picked the team up when down, which helped lead to such a successful season for Illinois.

“We never discounted anyone, so if someone had something to say we listened and gave feedback and accepted everyone’s opinion,” Prince said. “Jordyn (Poulter), Ali (Bastianelli) and Jacqueline (Quade) had a lot of on-court presence for us that year, and we trusted them a lot to lead on and off the court, but everyone had their say and that’s what made that team so special.”

Another leader credited with the team’s success is head coach Chris Tamas, who was entering just his second season with the Illini. He and his assistant coaches developed relationships quickly with their players and formed a connection with the team, helping lead them on a tournament run.

“It’s so tough to go into somewhere your second year and do something like that,” Quade said. “He (Tamas) gives us a lot of room to learn from our mistakes, and I think him and the rest of the coaching staff had so much knowledge… He laid out a foundation where we could be super steady in a lot of different areas.”

The Illini headed into the postseason with their impressive win streak, and the momentum from the end of the regular season carried over. The highest seed gets to play at home in the postseason, and Illinois began their tournament with wins over Eastern Michigan and Louisville. The next weekend they beat Louisville in four sets and swept No. 14 Marquette to advance to the quarterfinals.

Their matchup in the quarterfinals and last game of the year at Huff Hall would be a familiar foe: the Wisconsin Badgers. Having lost to them at home earlier in the year, the Illini knew this would be a statement win and gave them momentum heading into the Final Four. Illinois played confident and came out with a 3-1 victory, sending them to Minneapolis for the Final Four.

“I think it’s tough to play any team three times in a season, especially having split with them in the regular season,” Prince said. “Waking up that morning I knew we were gonna win, there was no doubt in my mind… It was amazing.”

A week filled with Final Four festivities, including a banquet and practices at the Target Center, raised excitement for the Illini. A matchup against Nebraska awaited Illinois, a team they split with in the regular season, foreshadowing a great match.

The game was close and exciting, as expected, but didn’t go the Illini’s way. After winning the first two sets, the second being by nine points, Nebraska found a rhythm. Illinois fell in sets three and four by a combined eight points and lost the fifth set 15-11, ending their season.

“I think we prepared as hard as we could and came out and executed pretty well,” Quade said. “We didn’t love the outcome, but I think we could step back and be pretty proud of what we accomplished.”

In 2011, the Illini made it to the national championship game and lost, but the dominance in the Big Ten in 2018, along with a coach achieving this much success in only his second season, is what makes the 2018 team the best Illinois has had since 2000. The 2018 team finished four spots higher in the rankings at the end of the season than in 2011 and had a better conference record, topped with their 13-1 road record.

Along with a national semifinal appearance, many individual awards were achieved as well. Poulter and Quade were first-team All-Americans, senior middle blocker Ali Bastianelli was third-team All-American and all three were first-team All-Big Ten. Junior middle blocker Ashlyn Fleming earned second-team All-Big Ten honors, and Tamas was recognized as the AVCA Northeast Coach of the Year.

Although the Illini didn’t achieve their ultimate goal of winning a national championship, they without a doubt had one of the best seasons in team history. Illinois’ accomplished team and individual success in 2018 will always be recognized as one of the most successful teams in Illinois sports history.

“To be with that group and do what we did was just incredible,” Prince said. “I’ll never forget it and am extremely grateful to have been a part of it.”