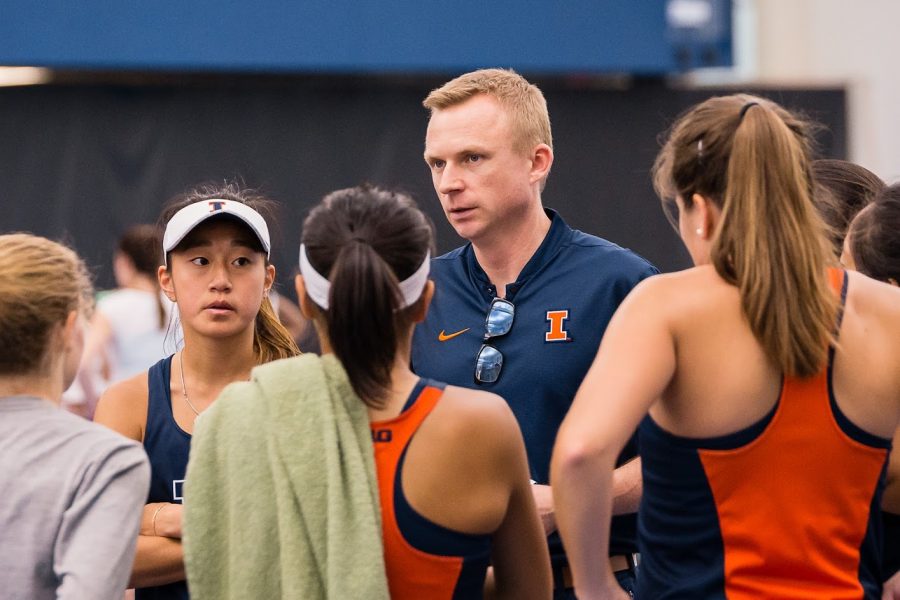 Illinois head coach Evan Clark talks to his team during the match against Rutgers at Atkins Tennis Center on Friday, March 29, 2019. The Illini won 6-1.

As the world closed its doors, Illini women’s tennis head coach Evan Clark found an open one. Clark has used his newfound free time from the shortened tennis season to positively impact the community by promoting a fitness-based challenge to raise money for those in need.

Clark has taken up what he calls the “calendar month running challenge,” a fitness challenge requiring him to run several miles each day equal to the day’s date (i.e., running 20 miles on April 20). His spin on it, however, is to also donate that same number of dollars to the COVID-19 relief fund of the United Way of Champaign County organization.

United Way of Champaign County is a longtime running local organization focused on providing aid in the community.

“We’re the boots on the ground when there are new and emerging community needs,” said Becca Guyette, the organization’s chief development officer. “(We help with) everything from food programs to school programs that require rental assistance and emergency household assistance.”

For Clark, the idea for his challenge came from a close friend, but since then, it’s grown to something much bigger.

Initially, he mentioned it at a meeting among Illinois Athletics staff members, inviting others to join him in his efforts. Since then, he’s publicized it on Twitter, receiving support from other coaches as well as the United Way Champaign organization.

4/14/20: 14 miles✅ & $14 donated to @UWChampaign Covid-19 Relief Fund! I encourage everyone to match my donation, donate based on your fitness activity for today or just donate if/when you can! Who’s with me? Donate here:https://t.co/VW8OLhJfoT#RunforCU #15tomorrow #29dayleft pic.twitter.com/ivdUEEqspj

“It’s wonderful,” said Guyette about Clark’s fundraising. “It means a lot to us. There’s nothing more important to us than the trust of the community, and this represents that.”

Beyond just helping spread the word about Clark’s challenge, multiple coaches have joined in on the challenge in their ways. For example, Illinois men’s basketball coach Brad Underwood pledged to match Clark’s donations and women’s gymnastics coach Nadalie Walsh has even gotten involved in the fitness aspect of the challenge.

During the back end of April, Clark will be on track to run potentially a marathon’s worth of miles every single day. According to Clark, many people have called him “crazy” for attempting such a feat. Because of the high amount of miles, Clark has gone as far as explicitly telling the tennis team not to join in due to injury risk.

“I’ve told them they shouldn’t be doing that because it’s a good way to get injured,” Clark said. “I always tell them the caveat is it doesn’t matter if I’m injured. I’m not playing the matches. I’m just coaching, so if I’m a little banged up, it’s all good.”

Clark is also putting all of his work towards a personal goal. He hopes to end up in good enough shape to achieve a lifetime goal of running an ultramarathon, which is any type of race above the standard length of a marathon. Clark is aiming to run “at least 50 miles.”

Clark’s goal has helped fill a competitive void he has felt since the premature ending of the women’s tennis season. He hopes his challenge can do the same for others.

“It’s really easy to wake up each day and say, ‘well, it’s another day, and it’s going to be exactly like the day before,’” said Clark.

Women’s tennis is one of the most community-driven sports on campus, which has helped bring additional local attention to Clark’s fundraising. With so many people coming together to help, Clark’s efforts have been definitively successful at helping raise money for the community and keeping people active during a difficult time.

“The community is so special to us,” Clark said. “We’ve had a ton of support for our program, our family, our neighbors and our friends we have here. The community is strong here. That’s what makes it special, and that’s why we live here.”