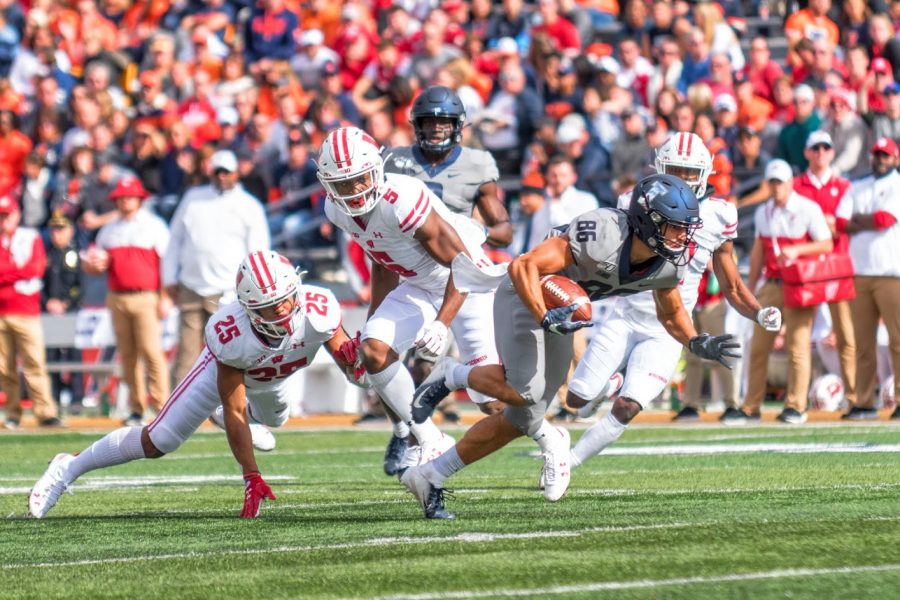 Illinois wide receiver Donny Navarro breaks free for a touchdown during the game against Wisconsin on Oct. 19, 2019.

Every year, there are multiple videos from college football programs across the country that go viral, because they feature a walk-on player earning a scholarship. A player comes to a program and works so hard they are awarded a full-ride scholarship for their effort and accomplishments; it is an ultimate feel-good story.

Last season, the Illini had one of those moments. Donny Navarro, a redshirt sophomore receiver, earned his scholarship on Nov. 7, two days before the team went on to beat Michigan State. He was awarded this scholarship after becoming a crucial part of the Illini passing game in the middle of the season.

It was something Navarro didn’t really expect at that moment. He thought that day was going to be filled with regular meetings; he was wrong.

“It was just straight emotions really,” Navarro said. “In about a time of about 5-10 seconds there, when everyone was… congratulating me, it kind of took me back to those moments when I was working really hard to get this opportunity. It took me back to my high school days and my journey from high school to college, then from (Valparaiso) to Illinois, so it was very gratifying. It was an awesome moment that I will never forget.”

Now that the viral moment is over, Navarro looks to continue to be a productive part of the team and help them succeed. However, the wide receiver room is only getting healthier and more talented this next season. The team will return names like receiving leader Josh Imatorbhebhe, Trevon Sidney and Ricky Smalling, who looks to be healthy. Navarro will have to continue to make improvements to stay a productive part of the group.

Navarro is by no means a stranger to hard work, though. When he first transferred to Illinois from Valparaiso, he had to sit out for a year due to NCAA transfer rules. Wide receiver coach Andrew Hayes-Stoker hoped Navarro would receive immediate eligibility, but this time off allowed Navarro to learn what it takes to be a Big Ten wide receiver.

Navarro looked at the 2018 season as an opportunity to sharpen his skills, both physically and mentally. He would constantly watch tape of himself and of defenses to learn how he could improve, and he was a scout player that would go against the Illinois starting defense every practice. Everything he did that year was to help him fit better into the Illinois system.

“He continued to work and evolve, and he got better,” Hayes-Stoker said. “And he is still doing that. I think what he needed to learn, more or less, was an understanding of what was expected of him at the position that we had him playing.”

His hard work continued when he gained his eligibility. At the beginning of the Big Ten season in 2019, the Illinois wide receiver room was being hit with inconsistencies. The coaches thought while there might not have been room for him in the slot, moving Navarro to the outside might benefit him and increase the depth of outside receivers.

During the game against Minnesota on Oct. 5 in which Illinois’ defense outscored Illinois’ offense by 14 points, Hayes-Stoker was looking for a receiver to make plays. So, he put in Navarro who would go on to catch three passes in the game.

The culmination of all his work might have come during Illinois’ upset win over Wisconsin.

In the second quarter on second and nine from the Wisconsin 48-yard line, Navarro ran a slant route, and quarterback Brandon Peters threw a strike to his chest. Navarro, who had beat his man off the slant, caught the ball and made a slight move to make the safety miss. Afterward, there was nothing but open field between Navarro and the end zone.

Navarro continued his production for the rest of the season, finishing the year with a total of 27 receptions for 345 yards and two touchdowns. 19 of those receptions, 236 of the yards and one of those touchdowns came in the six games that followed the Wisconsin game.

Hayes-Stoker says the decision to award Navarro with a scholarship came from head coach Lovie Smith, who values hard work. They had talked about Navarro as someone who might earn a scholarship in the off-season, but because of his work ethic, Smith gave him one midseason.

“You always want to reward a guy that is going to be appreciative,” Hayes-Stoker said. “And you want to reward guys that you say, ‘well, if he gets the scholarship is he going to continue to work and develop and be the same guy, or does he only want the scholarship to take a ride in the boat now?’ I think Lovie believed what he was getting with Donny when he decided to award him that.”

Even though Navarro has earned the scholarship, his goals stay the same. Navarro is committed to helping the team in any way he can. While he obviously has experience with the receiving group, he has also played on special teams returning punts for the Illini.

Right now, Hayes-Stoker says Navarro has earned the starting slot receiver spot to start camps but adds that a lot can change between now and the start of the season. No matter what happens with Navarro in the depth chart, however, the Illinois passing game will feature a lot of talent in the fall. Navarro hopes the experience and talent will only help the team going forward.

“I think that we’re going to use the momentum that we started to build in 2019 and we’re going to move forward with it,” Navarro said. “We want to use last season as a springboard into 2020. I think us working together and team chemistry is really going to be improved from last year.”

Editor’s note: A quote was changed for clarity