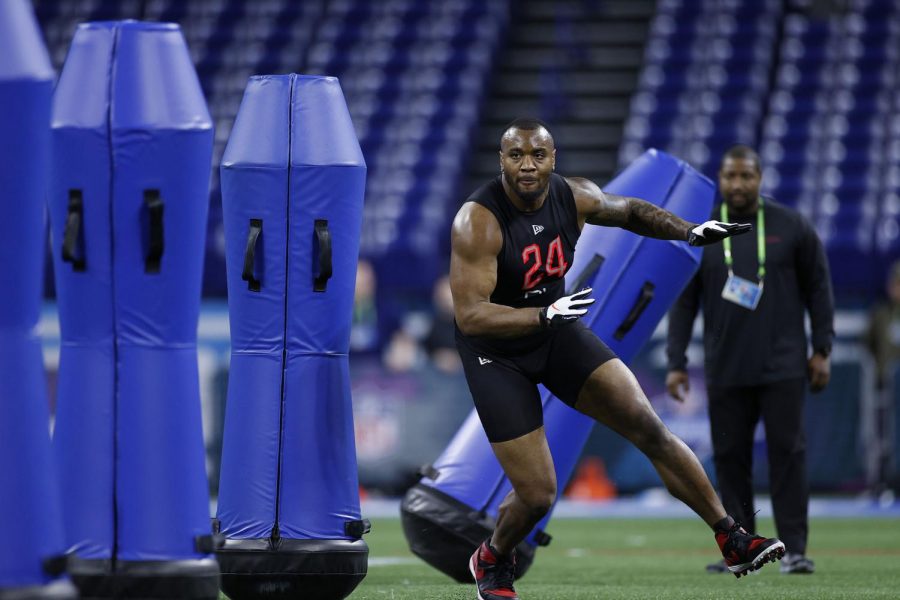 Defensive lineman Raekwon Davis of Alabama runs a drill during the NFL Combine at Lucas Oil Stadium in Indianapolis on Feb. 29, 2020.

Every year we see the top picks in the NFL Draft greet NFL Commissioner Gorger Goodell center stage in front of thousands of people.

Due to COVID-19, the tradition was stopped for a year, but it gave NFL executives, coaches, draft picks and fans a window into how important family is in football.

Former LSU quarterback, and Heisman Trophy winner, Joe Burrow was the first overall pick to the Cincinnati Bengals—no shocker. Burrow deserved to be the first player selected in the draft after posting more than 5,600 yards and 60 touchdowns as a senior, leading LSU to the National Championship.

Fans got to see Burrow hear his name called by Goodell in his living room surrounded by his mother and father. ESPN’s cameras were able to spend more time on the Burrow family, which allowed fans to see the pure emotion that comes with being the No. 1 overall pick.

Burrow’s celebrations only foreshadowed how many family members would get airtime on ESPN. By the midway point of the first round, many NFL coaches and front office executives had their children surrounding their in-home draft setup.

The busiest time of the year for NFL general managers is from January to the end of April. In this four-month window, general managers spend more time in their office scouting college players, preparing for the NFL Combine and preforming other draft preparations. They don’t get to see their spouse or their kids as much as they should.

Coronavirus has forced us all to stay home and spend more time with family. However, the shelter-in-place orders allow NFL executives to do their work with their families.

Miami Dolphins Head Coach Brian Flores brought his two sons Miles and Maxwell into his draft room office. Miles and Maxwell were often seen high fiving their father, dancing and do what kids do best ¾ have fun.

Flores told Dolphins media in his post-draft press conference, “I haven’t spent this much time with my family — my kids, my wife (Jennifer) — in a long time and it’s been great to sit down and eat dinner, to help my kids with their homework.”

New Panthers head coach, Matt Rhule, joked with ESPN’s Trey Wingo on Saturday that ESPN didn’t give his kids enough air time when the cameras were focused on him, while he decided on who he wanted to draft.