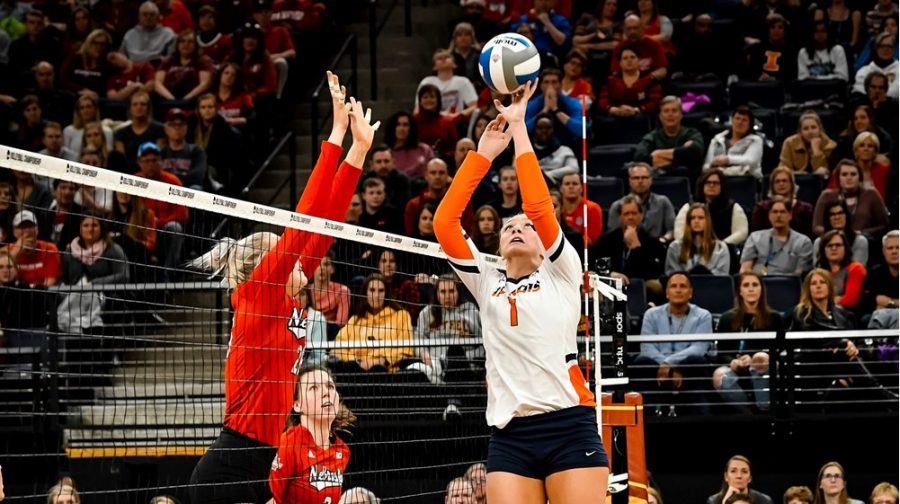 Just over a year after she graduated from college, former Illini setter Jordyn Poulter had been pursuing her goal of making the Team USA Olympic volleyball roster. Like all of her Team USA teammates, Poulter had been competing overseas and was nearing the end of her first full season with Chieri ‘76, a team in Italy’s top league: Serie A1.

She was prepared to finish the Italian league’s regular season and playoffs in April and then return to the United States to train for the summer league and the Olympics. But as just as the coronavirus was starting to develop back home, it was spreading quickly through Italy, forcing a near countrywide shutdown.

“Our first match was canceled probably mid-February,” Poulter said. “We were practicing for three weeks without any matches. Everything in Italy started slowly closing, and their government was restricting certain regions, and then the entire country went under lockdown. That for me was my cue to get out of there.”

Serie A1 didn’t announce the complete cancellation of the season until four weeks after Poulter returned home, meaning if she stayed in Italy, she would’ve been confined to her maybe-400 square foot apartment alone for months. After returning home, Poulter was prepared to keep playing volleyball and begin training for the summer with Team USA.

Unfortunately, the 2020 Tokyo Olympics were not immune to the devastating effects of the coronavirus either and were postponed until 2021, the International Olympic Committee announced on March 24.

With stay-at-home restrictions enforced almost nationwide around the same time, Poulter has been forced to live a life without volleyball, something she hasn’t encountered since elementary school.

“This is actually probably the longest I’ve ever gone without volleyball and without knowing what the next thing on the calendar is going to be,” Poulter said. “Our USA National Team gym is closed right now. We train out in California, and everything is shut down out there, so they don’t know when we’ll be able to resume training with the national team this summer… It’s definitely some adversity that I don’t think any of us have ever faced before, but hopefully we come out of it better.”

Poulter and her teammates have been training individually with whatever they have around the house. Luckily, Poulter and her family have transformed their basement into a mini home gym to keep her in shape and ready to compete whenever that time comes. She has also found time to relax while home, whether it be playing the guitar, longboarding or going on walks.

While the players haven’t had too much contact with the staff at Team USA, the strength coaches often check in or use Zoom to watch the workouts.

Poulter knows she has to be just as motivated as she was when the quarantine restrictions began. Whenever summer tournaments are resumed and when the Olympics take place in 2021, Poulter will still have to compete with the nation’s best setters to take the trip to Tokyo.

“We have about 40 girls in the gym at a time, and every tournament that comes up, a roster of 12 or 14 is made,” Poulter said. “Every day you’re fighting to make the next roster. There’s no space for complacency because you’re always fighting for a spot and a continuing revolving door of the next best players coming in.”

While being an Olympic competitor and playing with Team USA is the ultimate goal, reaching that point means making a lot of sacrifices. To play at the highest level in the world, volleyball players must travel outside the United States to play with elite international talent.

For Poulter that meant leaving her home and embracing a whole new country only three weeks after graduating from the University in December 2018.

“It was a lot of firsts,” Poulter said. “Being submerged in a different culture that speaks a different language. It was a big learning curve for me that first half-season last year. I’m really happy that I did it because I got to go headfirst into it. I started playing right away, which got me some good experience and exposure in the Italian league. I think it was good to be able to have that experience and that higher level, that international level. I think that helped me going into the national team gym last summer.”

While Poulter was grateful that her Italian teammates and coaches spoke English this year and she had a fellow American teammate to ease the transition, it didn’t make her feeling of FOMO go away.

Poulter had been missing out on holidays and events with family and friends, but she was able to stay connected to a piece of home while in Italy — Illini volleyball. Time zones made it difficult to catch most matches, but Poulter said she watched a few matches, including the first round of the NCAA tournament when Illinois faced Utah.

“It definitely is weird, especially being the first season after Ali (Bastianelli) and I graduated,” Poulter said. “It was definitely weird to watch and to see Beth (Prince) still on the team, she came in with Ali and I. For her to still be there, it was weird to watch because it felt like she was leaving with us, but yet she was still there. It was cool to support. Now I have the role of being an alum, and all I can do is cheer them on. It’s definitely a different role, but it’s a role I’m happy to be in.”

Now being in the same time zone as her former teammates and best friends, Poulter has been able to keep up with their group chats and participate in Zoom calls with some of them. She also caught up with Illinois head coach Chris Tamas and his wife and volunteer assistant coach Jen Tamas.

While Poulter is happy to be back home for a more extended period of time, she will be more than ready to get back to work when the time comes, even if that means being removed from her “normal” life again. While being overseas for nearly the whole year is tough at times, Poulter is willing to do whatever it takes to reach that Olympic level.

“It’s hard to leave your life here in the U.S. to go play over there for just how long the season is,” Poulter said. “I don’t think that’ll ever get easier for me, but I know this is part of the process of getting to where I want to be which is on an Olympic roster. So, hopefully, these sacrifices pay off in the long run.”