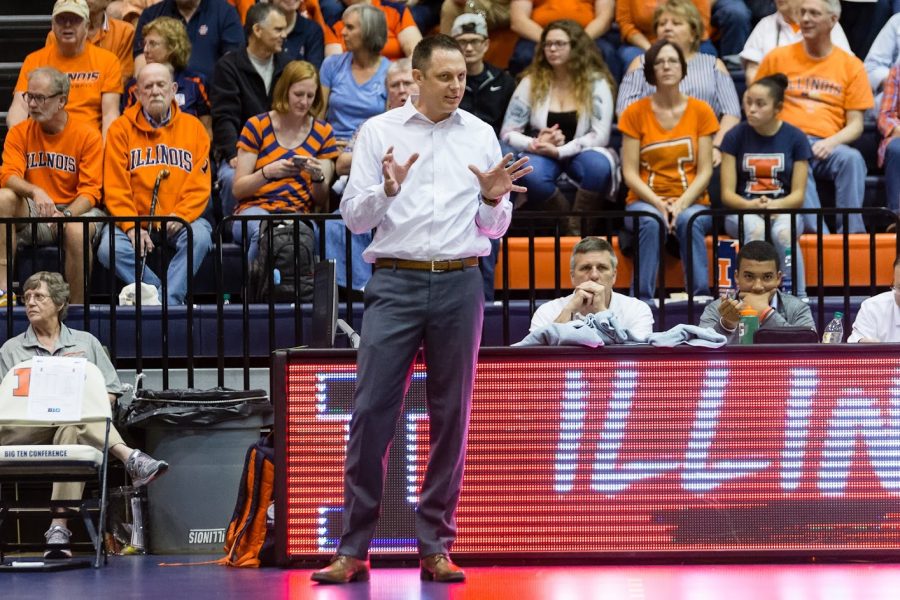 Illionois head coach Chris Tamas talks to his team during the match against Iowa at Huff Hall on Friday, Sept. 28, 2018. The Illini won 3-0.

For all players and coaches in the collegiate athletics world, unprecedented changes have been made due to the outbreak of COVID-19. For Illinois volleyball head coach Chris Tamas, that challenge comes with working with players and coaches from home as well as balancing his family life.

The spring is vital for coaches to start planning for their team’s fall season and to get a good look at the roster. Despite not being able to get in the gym and work with his team, Tamas and his fellow coaches have been able to find ways to take advantage of the time off the court and get ahead in other areas.

“From a coaching standpoint, it gives us more time to be organized,” Tamas said. “Usually this time of year we would be either in the gym or on the road recruiting, so it gave us a chance to focus on our team, talk to coaches and recruits that we’re able to talk to and stay organized as a team.”

The critical loss for the team while not being able to get on the court is losing reps and time to play together. Each coach and team needs to find a way to make up for the lost time, and Tamas and his staff have made sure as much of that is still being achieved as possible.

“As a staff, we still talk when we need to and have two or three-hour meetings to discuss what we’ll be doing for the week,” Tamas said. “We (the coaches) work a lot within our positions and make sure they’re working on what they need to be doing, and then rotate and check-in with everyone like we usually do so that we can try and do what we would be doing in the gym.”

Although he gets time to talk and have meetings with the rest of his staff when needed, Tamas is always with one of the coaches on his staff. Jen Tamas, Chris’ wife, is a volunteer assistant on the team. Chris and Jen do use the time together to their advantage from a coaching standpoint, but balancing their family-life is still the top priority.

The extra time at home has given Tamas lots of time to spend with kids, which he often shows on social media. A video of him and his wife playing a volleyball game with their kids was posted on the coach’s Twitter account, as well as a video of him pulling his kids in a toy car. The latter of the two comes from another Illini who posted a workout video on his Twitter, and Tamas had fun in making his version of it.

“We responded to the challenge because one of the football players was pulling his car, and I’m not that strong anymore,” Tamas said. “We liked to be apart of it and had fun re-creating it.”

“As soon as I took the job, I understood the power of social media as it’s the way to communicate really and people can get to know your personality,” Tamas said. “I think all the Illinois coaches and everyone else in the department have been great with keeping the community engaged in content and be able to get through a tough time altogether.”

Although many challenges have sparked since the outbreak of COVID-19, Chris Tamas has been able to adjust both as a coach and as a family man. Meeting with players and coaches to keep the team organized and making sure to spend time with his family and have fun are both things the Illini coach has been able to accomplish. His social media presence has helped spread positivity during tough times, and the coach seems to be doing all he can to make the most out of his time.

“The fact is that we are home, and we’re not in the normal,” Tamas said. “But I think in these times, you definitely have to find the positivity and show that in whatever you’re doing.”