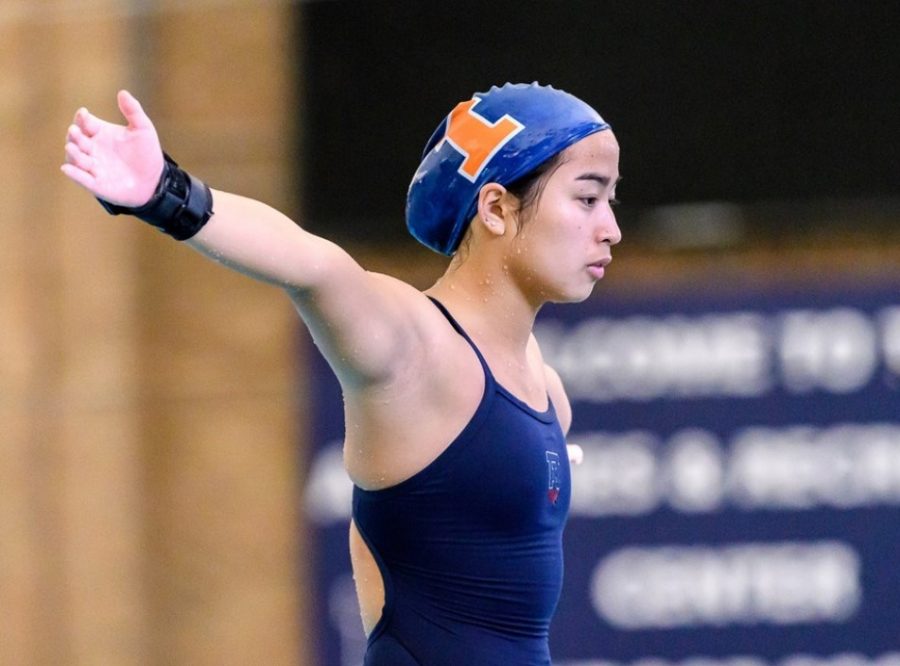 Former Illinois diver Ling Kuhn readies herself before an attempt during the match against Indiana State on Oct. 13, 2017.

Former swim and dive athlete Ling Kuhn became the first Illini to make it to the NCAA Championships for platform diving. Kuhn is now one year out of college and is settling into her life as an event caterer.

Currently, she works for Michael’s Catering located in Champaign. Her title is Event Producer, and she takes care of meeting with clients, creating a menu, making recipes and cooking for the event.

The Bloomington, native graduated from the University in 2019 with a degree in hospitality management. Kuhn says the College of Aces and working at the student-run Bevier Café helped her to where she is now, shaping her leadership skills.

“I was in there cooking and doing what I do now today,” Kuhn said. “So it has really helped me prepare hands-on.”

Kuhn had plans to get into diving again, but because of COVID-19, she’s had to wait on that.

While she may have accomplished things like finishing 18th in Platform at NCAAs, being a Dike Eddleman finalist for Female Athlete of the Year and becoming the first Illini diver to score in all three events at the Big Ten tournament, she used to think she wasn’t good enough.

“I was probably one of the worst divers to ever step foot in the Illini program history,” Kuhn said. “I was such a bad diver freshman year.”

Going into Illinois her freshman year, Kuhn knew she wasn’t ready for such a big task ahead of her, but then-diver coach Chris Waters believed in her.

“He really started the momentum of really helping me get to where I used to be and (Coach) Manny took it home,” Kuhn said.

The transition from being a freshman to a sophomore changed how Kuhn saw herself as a diver and a leader.

“I realized I had to grow up,” Kuhn said. “I had girls all of a sudden asking me how to DARS, how to sign up for a schedule.”

As only a sophomore, Kuhn was confused as to why she was the one being asked, but it made her develop leadership qualities.

Kuhn recalls some of her favorite moments being when she scored a 305 on the 3-meter board at the Big Ten Championship her junior year.

“I hit that dive,” Kuhn said. “I came out of the water and it was just crazy, everyone was just screaming.”

Kuhn’s dive coach Manny Pollard taught her a lesson that she uses to this very day.

“It takes a lot more than hard work to be successful,” Kuhn said. “And it’s so true because you think you know what hard work is, but you really don’t until you truly work as hard as you can to get your dream.”

Kuhn’s goal junior year was to make NCAAs, but she missed it by several spots. She thought she worked hard enough to make it, but that wasn’t the case.

“I still use that to this very day,” Kuhn said. “Like what can I still be doing to get better, to better myself, to better my company, better the people around me.”

With the help of Pollard her remaining two years, he set Kuhn straight into a mentality to work hard every day.

With the thick skin of Pollard, he told the girls things they didn’t want to hear.

“He doesn’t care how your day was, but you still have to dive the best you could dive today,” Kuhn said.

It helped her separate her personal life and work to get her dives done in practice and competition.

On the last day she dove as an Illini at NCAAs finals in 2019, Kuhn was up on the platform soaking up all the emotions she was feeling.

“I finally made it,” Kuhn said. “It was so comforting, I can finally eat gummy worms and relax.”

During the time of being at NCAAs, Kuhn said she and Pollard worked on reminding her that she made it, she earned the spot and worked her butt off to get there.

Keeping that constant mindset is what helped her achieve the 18th place finish.

“That really helped diving consistently for that meet because I kept reminding myself that I worked so hard the last two years to get here, I know how to do these dives, I’m in this competition,” Kuhn said.